In pursuit of cassette nirvana

I’ve revisited my cassette archive recently, driven in part by a house move and dusting off old equipment that had been stored and unused in recent years.
A close friend also on a similar journey has acquired a Nakamichi Cassette Deck 1 recently and has been enjoying that tremendously.
I’ve got a rather modest TEAC W-550R which plays ok but can no doubt be bettered with something more refined.
What would be a good shortlist of suitable decks mainly for playback purposes, are there specific features to look out for like azimuth adjustment as an example?
Any ideas and suggestions appreciated, just to set the scene, I’d love a Dragon but will aim for something a little more wallet friendly! 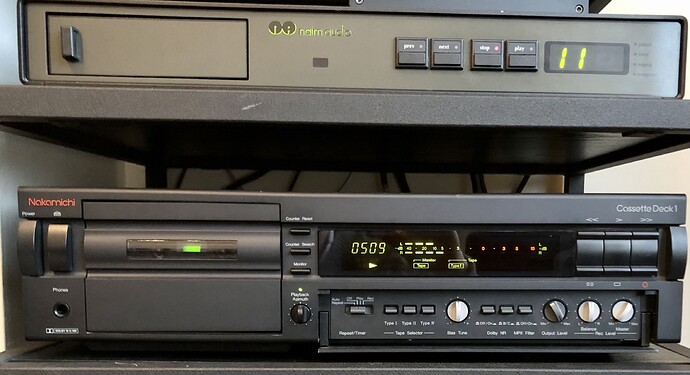 Mr M, much will depend on your budget. Also bear in mind that if it’s mainly just for replay then worth knowing what deck you used to use to record on your old cassettes. This can be important because of differences in record and replay responses. This is an area where things improved greatly during the latter part of the '80s.

Easy Azimuth adjustment is nice, but rare (and costly). However, any deck can have its azimuth optimised for a particular collection of cassettes, assuming they were mostly all recorded on the same machine.

Hence my reference to my friends recent Deck 1 addition which does have manual playback azimuth which gives some accommodation for playback adjustment. The recordings would have been made on a variety of decks ranging from average to decent and almost always “of the moment” as opposed to being extensively planned for or optimised, apart from perhaps me choosing a decent tape to record on to at least!
I’d probably look to do digital copies of the more precious ones, mainly as down the line those tapes will likely deteriorate, so my interest is mainly for playback and creating a digital archive of the tape archive. If the deck I found was reasonable at recording I may do some mix tapes of vinyl but that’s very much a minor requirement.

OK, so if you want easy adjustable playback azimuth (i.e. via front panel control) then your choice is rather limited and they will be costly; you have the Nakamichi CR-7, DR-1, and Cassette Deck One. Of those, the sweet spot his probably the Cassette Deck One. I had the Cassette Deck 1.5, which was similar but did without the azimuth control, and it was a great sounding deck, albeit one where the bass end was shelved up a bit and it tended to sound a bit “fruity” but nearly always a in a very nice way indeed! I never got on with the DR-1 finding it a bit “hard” and unengaging by comparison. The CR-7 is glorious, but as good one is very, very costly these days.

An alternative could be what was called “Play Trim”. This was more of a tone control that acted prior to the NR circuits and could liven up many a dull sounding tape. Yamaha and NAD offered this facility. Indeed, the NAD 6300 was a wonderful deck that was perhaps only held back from rivalling top end Nakamichis by the head used (IIRC the same one used by Revox), the Nak being superior here.

If you don’t wish to spend much at all then you could consider the Yamaha KX-580SE. This was only a two head deck but it worked really well, seemed to pick up awards every year for the best part of a decade, and had play trim onboard to pep up old tapes.

Thanks Richard, all helpful guidance!
I’m happy to experiment a bit here and spend a bit of cash but the CR7 or Dragon type journey is unlikely despite being desirable.
I’ll take a look at the NAD and Yamaha suggestions though.

Cassette Deck One would definitely be my first choice here. The NAD is a rare one and they all seem to have suffered over the years, so finding a nice “low mileage” example may be hard. There must have been thousands of the Yamaha made and sold in the UK so that should be by far the easiest, and the cheapest to source.