Asking for a friend (really).

4mbps is his limit and he’d like a nice study system…Could he stream Qobuz from, say, a Uniti Atom?

In theory yes… I mean music files don’t need that high a data speed. However the issue I had, back in the days when my own internet was in single figures, was the speed wasn’t stable. It would fluctuate up and down all the time. So the average was 5 meg but looking at it on a graph is was up and down and all over the place. This created havoc with video and music files. So a nice flat stable 4 meg and you’re okay. Bouncing up and down and probably issues.

That’s a great help thanks.

Not to mention when someone else jumps on the
Wi-Fi and reduces the bandwidth even further.

How about a 4G router setup maybe worth looking into but all depends on locality of your friends home etc.

EE, THREE, Vodafone all do unlimited data sims with coverage maps on their websites

Another option here is to download and playback locally, Qobuz does support this and the Atom can be used in such a way you can playback the music from the Qobuz app either on a computer or a phone/tablet.
The Qobuz apps support Chromecast which is supported in the Atom and would be a way of overcoming the bandwidth constraints. You could do this as a complimentary playback method, you could still stream but the higher bitrate material will likely struggle with that connection speed, 16/44 CD quality should be ok but if you have more than a few devices on your network using your bandwidth even then you might have issues.
Local playback either from a NAS or via the Qobuz app with offline playlists/albums will work best.

We have 2 internet connections, 200 meg Virgin media and a backup ADSL which syncs at just over 6 meg and gives us somewhere around 5 megs. During a recent Virgin outage we were OK up to 24/96 but 24/192 wasn’t viable.

Our line speed is a paltry 4.5mb, but reasonably consistent. It’s fine with CD quality, and having recently jumped from Tidal to Qobuz, I was expecting to have to limit that to 16/44, but actually it’s OK with 24/44 and 24/96, but 24/192 sometimes drops out, so I’ve set it to 24/96.
Obviously this assumes that there is not much other activity on the network. A bit of surfing is fine, but with Netflix or iPlayer on the TV at the same time, it wouldn’t work. There are just two of us in the house now, so we can just about live with this.

Perhaps also worth bearing in mind that line speed is not the only issue. Latency, contention levels, and probably a whole bunch of other stuff I don’t understand, may give different results with different locations and ISPs.

Perhaps also worth bearing in mind that line speed is not the only issue. Latency, contention levels, and probably a whole bunch of other stuff I don’t understand, may give different results with different locations and ISPs.

Yes this was the problem we had… headline rate was 5meg but the variations in latency and stability just made it useless at any real time streaming.

EE, THREE, Vodafone all do unlimited data sims with coverage maps on their websites

I appreciate this Steve but overall if you are using a crappy 4mb ADSL connection with no sign of fibre any time soon and if you can average 20-30MB on EE if this drops to 10mb at busy periods it is still worth doing.

Please note I use one of your supplied Teltonika RUT950 in my caravan with a THREE all you can eat SIM and now EE both have been excellent, EE better coverage in Bridlington.

Oh I agree… even 10meg is good enough

I’m in almost the exact reverse position here in rural Kent; no fibre but a reasonable 16Mb ADSL connection and awful mobile coverage. A good proportion of the time I get no signal at all but when I do this is typical. If I could get 30Mb on EE I’d be very tempted to get a 4G router but alas…
It means that wifi calling is a must here which rather annoyingly limits the number of handsets I can consider, some models will only work with EE wifi calling if EE supply them rather than buying elsewhere. 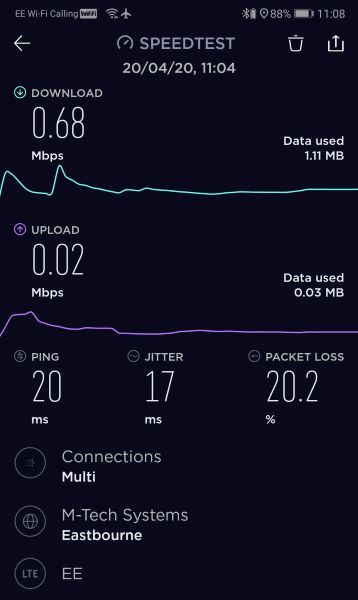 limits the number of handsets I can consider, some models will only work with EE wifi calling if EE supply them rather than buying elsewhere.

I use a landline phone from home, mobile only when mobile. Originally it was primarily because the cost was lower, but in fact mobile reception in the house is poor so it is the best way for phone calls.

With the ongoing lock down I do miss the caravan

Wifi calling is voip using a VERY compressed codec… not sure but ISTR 9.6K. In fact this is generally the same for mobile voice calls anyway. Land line calls use full 64K codec; this is one of the reasons why land line calls are better quality than mobile calls. Anyway you don’t need much in the way of broadband speed for wifi calling to work just fine.

Okay I admit it’s a while since I checked this… things have changed It’s c. 12K for the codec though over LTE or 3G it is possible to use a different codec which is much better quality though it’s use depends upon the capability of the masts and what their congestion and contention is like.