I am a very long time Naim user - my first ever introduction was an original Nait back in 1985 when I met Rick Duplsea of the Audio Alternative when I was looking to buy my first hifi while in college. It was a fortuitous meeting and Rick became a friend, mentor and eventual employer.

I learned a lot from Rick as he was great about cutting through the hifi silliness and listening and finding the music. We built many amazing systems during the several years that I worked for him and when I finally left to pursue my career in photography I had upgraded my way to a 42/HiCap/250 and an LP-12/Itok.

Sadly I sold the LP-12 after a cross country move to NYC but kept the records. The system is quite old now but still sounds good. I had replaced the knobs with the larger style ages ago and those broke and so I machined some new ones. 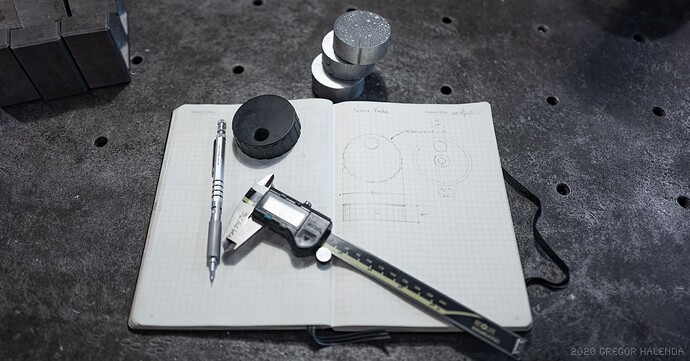 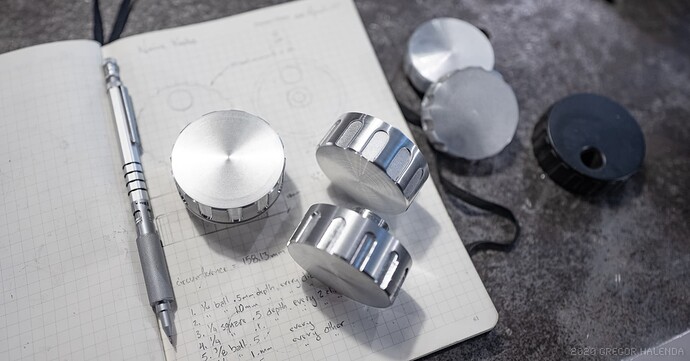 And now, finally, to my question.

During my time there I learned that we wanted the most rigid way to mount speakers. Typically this involved large stands, small spikes and more often than not in the case of the floors, screws into the floor that the spikes would sit on. This created the most rigid base for the speakers.

I recently picked up a pair of Ariva speakers that did not come with bases but instead have three 3/4" indentations for steel balls. I have not been able to find a good photo of the original bases but suspect that the balls are/were an idea that passed on as a way to self index or create a more solid connection.

I have the ability to make new stands and don’t have any desire to modify the speakers cabinets with spikes so I plan to make a base that receives the balls accurately and then rests on adjusting spikes to the floor.

What is the point of balls on a speaker? It seems a rather less rigid index unless the idea is to connect with greater surface area. I have read many of the Fraim threads and the threads of the home made equipment stands which many seem to be using balls in brass cups. I’ve not seen many speakers with balls for a base and can only assume it was an idea that did not stick.

I will admit that I listen to my music more than play with or adjust my system and so I want to simply solve this missing base problem and get back to the music.

Thank you in advance for any replies.

That is a very nice job on those knobs. Sadly I can’t answer your query re ball vs spikes though.

I had Ariva’s a short while, fun speakers but I dont remember much

Click on this thread and see if it is of any help: DIY Ariva platforms

The Arivas used recesses in the bottom of their cabinets to accommodate domes metal heads. It was quite clever really, it allowed easy levelling of the speakers via the detachable plinths, which also gave some decoupling between speaker and floor.

Thanks, I saw and read that thread but the photo was too small to really make out much information on the construction. I bought exactly sized balls for the recess and placed those on the floor and it improved the sound as opposed to sitting flat on the floor (which wasn’t a surprise) but I’d like to make a proper base for them - and maybe improve on the original.

I think this is where my confusion arrises. Sources I’d understand “decoupling” but speakers were always something we wanted to be as solidly affixed to the floor as possible. They are creating the sound and so anything that kept them in place improved sound as the energy was not lost in the structure.

Boenicke also use balls in their stands/speakers in a floating mechanism.

I wish Naim would go retro and release that today… so beautiful.

but speakers were always something we wanted to be as solidly affixed to the floor as possible.

I think this depends on the floor. If you’ve got a flexible floor then this is not ideal.

Balls in cups in speakers has been a thing for a long time.
Look up stillpoints and finite Elemente which have produced solutions for speaker brands and as an aftermarket mod.
Fashionable thinking nowadays is that a less rigid and more wobbly installation is preferable.

Yours is a fscinating question.

Spikes have been the default mounting option for speakers for decades, since the late 70’s / early 80’s in fact. If my memory serves me right they were first introduced by Linn Products on their then new design of stand for their Sara speakers. This stand received much attention in the hi-fi press at the time and was regarded as a huge upgrade for all speakers that would fit on it. I even bought a pair for my KEF Coda III speakers at the time!

The idea was that the spikes would provide a rigid contact with the floor and prevent the speaker stand and speakers from moving - thus improving sound quality it was said.

So far so good. Most manufcaturers adopted the spike solution for both speaker stands and equipment racks. They have been praised, somewhat bizarrely I think, for providing both rigid coupling and also isolation. Contradictory I would have thought…

Anyway comparatively recently a new school of thought has emerged. This regards spikes as the work of the devil. Various alternatives are implemented from compliant mountings involving springs or soft materials to devices employing ball bearings. The belief is that these alternatives provide a far more natural and superior sound.

My own view is that I dislike the effect of spikes. They seem to harden the sound, falsely emphasising leading edges of notes and producing an overly and unnaturally tight bass that one simply doesn’t experience in real life. As for the alternatives I don’t know since I have no experience of them. I have neatly side-stepped the issue as my own speakers have built-in wooden plinths that simply sit on the carpet with nothing in between. But certain devices have received much praise in magazine reviews.

So that’s how things stand at the moment. Which method of support you find best, ie. rigid vs compliant you can only tell by listening. I would encourage you to experiment a little especially as you seem to have excellent skills at metal-working and obviously have access to the required equipment. Good luck!

@sakurama yeah,nah - with your skills you should be able to machine a ball on spike. Or a spike on ball assembly.
Then tell us what’s better.

Thanks Pete. That was a very good explanation of what’s happened since I’ve been absent. I can certainly understand the idea that a rigid couple of speaker to substrate would be more tight.

Much like my father who continued to wear paisley ties well past their fashion height in the 70’s my hifi world is stuck in the late 80’s or early 90’s. I may very well want to stay there.

We installed many interesting systems and many of the wonderfully eccentric clients went to great lengths to build amazing rooms just for their systems. I think for me the system that rocked my world was an all Naim system with 135’s actively driving a set of SBL’s.

Thanks for the responses - I think I have a much better idea of how I want to proceed. I’ll post up my solution when I get there.

my hifi world is stuck in the late 80’s or early 90’s. I may very well want to stay there.

You are not alone in that. And it’s a good place to be. Those times were quite special in hi-fi I think, with some fabulous products that, in my opinion, have never been equalled. In many ways we don’t seem to have really moved on from there and, I would argue, in some ways we have gone backwards. Where are all the ground-breaking and rule-breaking products today? If I could use one word to describe todays hi-fi world compared to back then it would be - ‘bland’.

Well streaming is a revolution. Possibly not sound wise (but it can be discussed for hires records) but certainly in terms of the amount and diversity of the music at hand.

Yes that’s true. I suppose I was thinking more in terms of products like speakers and amps etc. There don’t seem to be any really exciting products appearing these days that offer something different to the majority. At least not at real-world prices that most people can afford. Back then there were even budget products that stuck their neck out and offered something different. Exciting products like the original Wharfedale Diamond Speakers, Musical Fidelity A100 amp or Rega turntables. These days it seems it’s all ‘me too’. Or maybe I’m just getting old and cynical…

Another way of looking at it is that we are close to what physics allows and there isn’t much room for improvement.

I’m sure there’s an element of that at play. But I think also it’s as a result of the economic conditions that are now prevalent. In those days manufacturers were prepared to take risks and market unusual products that broke the mould. They must have known that they would be ‘niche’ products and not necessarily sell widely, but they still went ahead. The classic Naim and Linn speakers are good examples. They were never popular, never fared well in magazine comparative reviews and were regarded in general as oddities that most people would do best to avoid. Most manufacturers wouldn’t have the courage to market anything like that now as it would just be far too risky financially. So its all safe products that run with the herd.