Is it possible to be a vinyl completist?

Looking at the way the music business is developing with artist or their estates Bowie,Springsteen etc selling their music rights to the big four EMI, Sony BMG,Universal, Warner, with little or no control on releases. Is it possible to be a vinyl completist.

First, “vinyl completist”?
I think I understand this phrase, that is, over time to collect and complete (finish) a curated catalogue of a musicians work. Ideally, all of it, included remastered versions, B sides, live albums, “rarities” and other such things.

As an avid collector of all sorts of things, not just records, I instinctively appreciate this question. Maybe watches, or antiques, or comics, or whatever. I would go so far to say, it’s sometimes OCD for me. My family often joke I’m a “hoarder”. So, I see a lot of people have this sort of capacity.

Allow me to add some personal thoughts too. I read the news of the Bowie estate selling his back catalogue and had two immediate thoughts. (1) That’s great for the estate ( and family). (2) Oh dear, that means some “product manager” now has to find imaginative ways of spinning that catalogue out, for a long time, to recover that investment.

Most likely, we’ll see an endless stream of interesting “nicely packaged” items, to tempt the Bowie faithful… I wonder what Bowie might think. I happen to know he was pretty shrewd on the commercial side of the music industry. ( Bowie bonds in the 90’s)! But, I also wonder what his creative artistic thoughts might be, of some one not connected to his work, tampering with studio recordings,(after the event). For example, maybe releasing pieces that Bowie decided weren’t good enough. Maybe altering our perception of his legacy.

Anyway, back to your original question. I agree this might become an issue for the collector. I think it might lead some like myself to make a decision about what’s considered a definitive collection.

My “two pennies worth”…
I always aim for all the studio albums. (I don’t normally go for the live albums or best of albums. Unless there is unreleased pieces in there)**. Also, I’m happy to add remastered versions. Particularly where the production plays better (for example, sensitively remastered versions, on heavy weight vinyl or good reproduction in 24/96 digital).

Hopes that all adds something to your thesis.

**Note : Good example would be U2, The Best of 1990 - 2000. Which I have just for one track, Electric Storm (William Orbit Mix). A record that I absolutely love. (Big fan of William Orbit too). This isn’t on any of the other studio albums I have.

I’ve been thinking about my earlier post on this topic.
Also, looking at my album collection and considering your thesis some more.

I now realise my general rules for a complete collection are maybe a little more nuanced. Whilst the rule proposed above is good for most artists, there are exceptions.

Genesis
Looking at our collection of Genesis studio albums, we have

All above were bought original, when I started to listen to music, from late 70’s onwards. In recent years, we have added remastered vinyl versions, for the few that are favourites.

By “And Then There Were Three”, Genesis was a different act. I don’t really consider anything after this studio album to be truly Genesis. Although the three guys Collins, Banks and Rutherford carried on, with great success. But they had evolved into something that produced very different material.

For me, the high point is the mid 70’s. Maybe SEBTP to ATTWT.

Out of a love of Genesis, we also have all the solo works, of Mike Rutherford (and the Mechanics), Tony Banks, Phil Collins, Steve Hackett and Peter Gabriel. As well as Bill Bruford, Brand X and one or two others, that the Genesis band members collaborated.

New Order
Looking at our collection of New Order studio albums, we have :

I don’t really consider “Movement” to be New Order proper. When you listen to the entire works of both Joy Division and New Order, you hear the genesis of Movement more in JD than NO. For me, it’s a work in progress between the two artistic styles. As a result, I’m not really a big fan of Movement. But I ended up buying it anyway, to be completist.

Substance (1987) is also an odd exception, as it’s a collection of singles or a type of compilation. I used to buy 12” singles and had many of the New Order ones. At the time, I wanted this on a CD to play at parties.

Furthermore, don’t consider anything past 1990’s as New Order proper. They disbanded in 1993. Only to reform in about 1998. So, the addition of Reply (2001) is an odd one. It’s a decent enough album. Again, bought it to be completist. But by then, the magic, (at least for me), was gone. In the end, Peter Hook left the band in 2007. The band was already evolving into a different sound.
So, again, I feel a band evolved into something else, not right to include in my own “curated” collection.

Although Japan started as a glam rock act, in the early 70’s, I found them around 1980, with just 2-3 years to go before they disbanded. Went to see them live twice and was wowed.

David Sylvian started his solo career following Japans split in 1983. When I listen to his 80’s albums it’s difficult for me to separate it all. It sounds like an evolution of an artistic direction.

The Japan band members rejoined briefly, for one studio album project. When listening to “Rain Tree Crow” (1991), this also sounds like a continuation too. I’m guessing this might also be because David Sylvian did the post studio production work for this album.

I don’t have any of the more recent DS albums. (Yet). I’ve always intended to listen to the ones we don’t have at some point. Let’s call it a work in progress.

In the meantime, I’ve been gradually buying the Japan and earlier DS albums as remastered 180g vinyl, which have gradually been released in more recent years.

Damien Rice
We have all three of the studio albums

DR has released two other live albums, which we probably wouldn’t add to our collection.

O was originally released on CD, in 2002. It was only 2018 when anyone could get a copy of the newly released 180g vinyl version.

Some artists release in one format and not another. (Not always vinyl). Some of the smaller, less well known artists can only be found on “download” formats. So, that’s a factor too.

Taylor Swift
We have recently collected the following studio albums :

This is interested - two albums - probably considered as a complete body of work, together.

They are a departure from TS’s usual fare. Myself and my wife happen to really like them both. For me, it’s more about the other artists - collaborating on these albums - The National, Bon Iver, Haim, etc. But we probably wouldn’t otherwise have a TS album. (Famous last words. “Never say never” and all that). At least not from her back catalogue. Maybe she will collaborate with others and produce similar material.

[ Note : Please consider my points about a collection, rather than anything about the actual musicians or specific albums. These are only mentioned for illustrating the point about “exceptions” to a general rule proposed ].

Hope this adds further refined thoughts to the idea of being a vinyl completist and specifically what constitutes a complete and finished collection. Or even a curated collection.

Yes it’s possible if you have enough money. I’ve three artists whose music I’ve seriously collected Paul Weller, Bob Marley and Chet Baker, Weller has releases that are just too outrageously priced, Baker has records that are so bad I’d never buy so it’s only Bob who I may one day complete

I am not a completist, but I am a big fan of Sylvian’s ‘Brilliant Trees’ 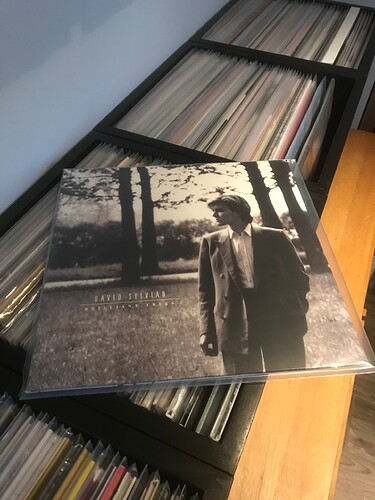 Without doubt, one of my very favourites.

I really struggle with conversations around “what’s your top 10 favourites” as we enjoy so many great albums. But I think this would make it into that list somewhere.

We’ve had CD copy for years. Probably from its release date. What do you think of the more recent vinyl version? We have that too and prefer it.

Yes, I also have a CD version (year unknown) and recent reissue vinyl, and I agree the latter is superior. Tracks like ‘Nostalgia’ are beautifully recorded. 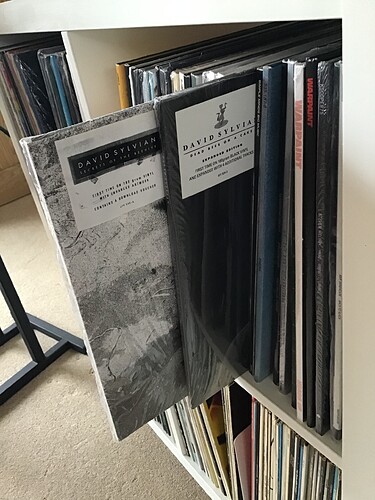 I think that’s one of the things I enjoy with DS’s work. I suspect he is a perfectionist in the studio. The productions are always faultless and a joy to listen to.