Is optical really superior for Qutest

I have been using a Chord Signature Digital Coaxial cable for a few years now.
It connects my NovaFidelity X12 to my Chord Qutest.

I have now read that Rob Watts himself recommends optical connection over coaxial for the qutest as it has “perfect galvanic isolation, as the coupling capacitance is almost zero”.
Jitter is not a concern with the qutest

I had an old cheap Kabeldirect optical cable lying about so I have been comparing the two.

The Chord Coaxial is definitely not as bright as the optical, but the coaxial gives more warmth and more definition to the bottom end.
Vocals are slightly clearer via optical but don’t sound as natural as the coaxial.

I prefer the coaxial myself.
Has anyone else tried this and what is the general opinion?

Who gives a toss what Rob Watts recommends? If it sounds good that’s all that matters.

Sounds like the state I’ve been in for the past two weeks.

I use USB from my Auralic G1 to Quetest. Primarily because spdif on Toslink won’t technically do over 24/96 and Coax won’t do DSD. I have a Really good USB cable and everything sounds wonderful!

I think common sense and a listening test with your own ears is the best way to judge what is best for you.
If you prefer how coax sounds then the choice is obvious, of course coaxial cabling is used extensively in broadcast and telecoms networks for multiple purposes and with a BNC type connector would typically be considered the prefered means of cabling a digital source to a DAC. Toslink is far more common on source devices like tv’s or set top boxes mainly as its cheaper to impliment and cable, it’s also less capable than coax as others have already highlighted.

Rob designed the Qutest so it is worth listening to his recommendations though no reason why you may not prefer an alternative.

I do use Qutest, but have found Hugo & DAVE are not Tpslink friendly and prefer QED USB cables or Canare Coax. Interestingly, Rob would not recommend Toslink for the top of the range Blu2 DAVE under any circumstances.

Using toslink, sounds generally brighter and I have always associated this effect as added distortion.

Who gives a toss what Rob Watts recommends? If it sounds good that’s all that matters.

If he invented it, I’m sure that he ought to know

So why wouldn’t you “give a toss”? Seems a bit strongly worded

The OP gave a very clear explanation of why they prefer the coaxial connection and while the optical may be better in terms of galvanic isolation it’s ultimately the sound that matters. People should have the confidence to make their own decisions, as the OP clearly does.

There have been lots of Mr Watts this, Mr Watts that comments over the years and possibly he’s as good at designing DACs as he is at self promotion. The almost slavish devotion shown by some perhaps irritates me more than it should, and hence my choice of words.

When it boils right down to it, who gives a toss about any of the opinions expressed on the forum (including this one, before any smartarse points out the irony!)?

one could say that the devotion of some to Naim could also be seen in the same way as you just described the one to Chord.

Anyway - I do like the optical inputs in all chord Dacs, but it depends on the cable and the source sending the signal - coax works fine to my ears too.

That also depends on the source and if using a BNC to BNC which is really the best way.

Shame Naim don’t give us an option other than BNC digital out. It’s a damn strain having to use BNC to BNC from ND5XS2 to Qutest.

But at least I don’t have fret over which input/output I prefer…Just whether the silly filters actually do anything. Now do I prefer the green or red???

BNC output is really quite a good connection. Naim and Chord electronics who make the Qutest are actually one of the very few companies that understand this and implement it.

Some do know this for sure, but don’t bother to implement this - like DCS.

How about adding a 2go-2yu to mScaler DAVE?

Ethernet in -> BNC out
And no noisy mains PSUs, it’s battery powered
And you can play from SD cards to eliminate the network completely 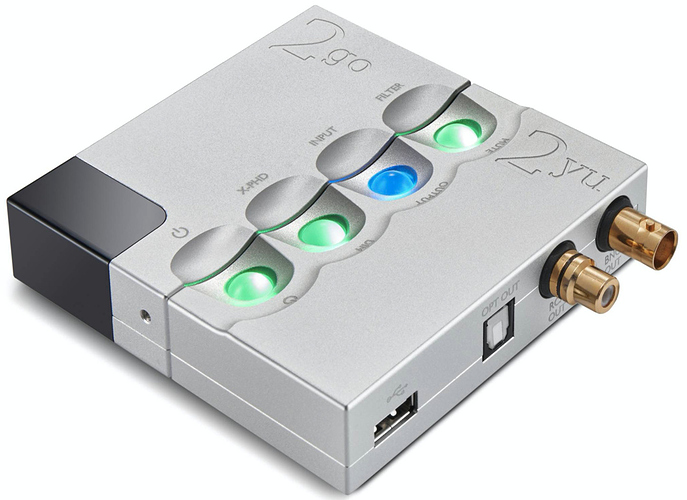 yes that is also an option, once I audition it, but it is rather expensive…

right now I am using an allo digione signature which has a BNC output and with the matching Allo linear power supply.

for my other systems I use a google chromecast audio which has native tidal integration which is what I really need, as I don’t buy CD’s anymore unless they are very special.

Having said that - the new Def Leppard live in Vegas and Live in O2 albums are out in 48/24 hi-res, I would rather buy that than the CD, but for now the tidal MQA hi res streams sound great…

As you have probably seen, the 2go/2yu thread on head-fi is now up to 170 pages of what is effectively beta-testing feedback on the ‘released’ 2go with Hugo 2 (2yu not yet out). Their MD Matt Bartlett is actively fielding the issues.
Hopefully Chord will get that sorted soon. I decided not to wait and I just went for the Allo DigiOne Sig, with a Ciunas Audio LPSU, instead - still feeding my TT2

Using toslink, sounds generally brighter and I have always associated this effect as adde

Apparently (on the Qutest) if the optical sounds brighter (glassy) than BNC for example, this is normally caused by leaving the BNC connected at the same time. Disconnect the BNC at one end or remove altogether. The reason being is the BNC cable continues to add RF noise back into the DAC if it’s still connected even if it is not in use which the optical doesn’t like. This is talked about a lot on Head-Fi.

Personally, I’d never used optical at all previously but just tried it when demoing a Aries G1. I set the Qutest to 3v, white filter, used a power bank and disconnected all other digital connects and the difference was big. No where near as bright as BNC / USB. It resulted in a sound that was smoother, silky, great detail and with a very low noise floor… the silences are very dark. For me in my system the uplift is significant and won’t be going back to BNC.

Apparently (on the Qutest) if the optical sounds brighter (glassy) than BNC for example, this is normally caused by leaving the BNC connected at the same time. Disconnect the BNC at one end or remove altogether. The reason being is the BNC cable continues to add RF noise back into the DAC if it’s still connected even if it is not in use which the optical doesn’t like. This is talked about a lot on Head-Fi.

I have read most of Rob Watts comments on Head Fi and did fully remove all BNC connections before using the toslink optical connection.

I have also tried using a power bank with the qutest.
It made no discernible difference in my system and Rob Himself has mentioned there is no real need for one.
I have read the qutest trumps the battery powered hugo 2 in overall sound quality and that’s without a power bank.
And it certainly betters my previous first gen hugo that was also battery powered

It could possibly be the fact I am using a Chord Signature coaxial cable and I do not have the same quality toslink optical cable to compare.

In that case, I wouldn’t be in a rush to try a higher spec Optical Cable… unless someone was able to lend one to you… or demo. If the coaxial sounds better in your system, then that would be the one to go for. At the end of the day, it’s what works for you as a, “Sum of all parts” that matters.

I suppose the main reason Rob Watts prefers and recommends Toslink is primarily because of its perfect galvanic isolation from other equipment in your system.

“So, which connection should you use?
The answer to this will depend on the kit you’re using. If it’s a straight choice between coaxial and optical, we’d go for the former. In our experience, a coaxial connection tends to produce better audio quality than optical, allowing for a higher level of detail and greater dynamics.”