Is there a native stream format for the NDS?

Hi
Does anyone know if there is a best or native stream format for the NDS? I have various FLAC, WAV, DSF files and normally convert on the fly in my PC streamer to WAV, but I am wondering if this is the best approach or indeed sensible.
Am I better converting to another format? Letting the NDS do the conversion?
Any suggestions please.
I know that I could try and do this by listening but to be honest but track by track, I’m not sure it’s an accurate way if there is a natural preference in the NDS
I note there is a similar unanswered question for the Core, but not the NDS
Cheers
Steve.

Wav is recommended by Naim.

I have always understood its best for the NDS (streaming player) to receive WAV as that format (codec) requires the minimum OS load to change the near identical WAV to raw PCM. Converting another codec such as FLAC to PCM in the streaming player means a heavier load on the players OS & reputedly affects SQ.
Therefore if transcoding to WAV, it’s better done by the NAS or PC (server).

Thanks both
I’ll stick to what I am doing, converting to WAV at the PC level.

Therefore if transcoding to WAV, it’s better done by the NAS or PC (server).

Please excuse this question.
How do you know wether a NDS is transcoding to Wav?
Most of my music files are stored as flac and checking the screen / app does not indicate whether transcoding occurs.

My ND5XS shows the file format on screen as it is playing.

A NDS does not transcode to WAV, it converts whatever stream its receiving to PCM. Transcoding (as its called) is done in the server (NAS)
If the server is sending a FLAC stream to the NDS, the NDS should show FLAC. If its sending a transcoded FLAC to WAV stream, I’m not really sure, I believe it can vary depending on server software.

. Transcoding (as its called) is done in the server (NAS)

Ok, how do you tell Asset, for example to transcode from flac to wav?

Ok, how do you tell Asset, for example to transcode from flac to wav

It’s in the configuration page on Asset. There’s dropdowns for the various file formats to select your chosen format.

It’s in the configuration page on Asset. There’s dropdowns for the various file formats to select your chosen format. 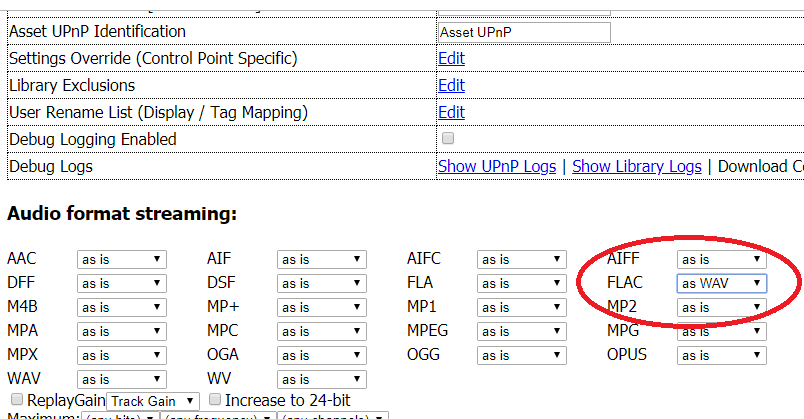 Yes exactly. I also use Asset and set the transcode (conversion) types in the Configuration page and let Asset do it on my PC.

Thanks guys … off to try it now

FLAC is best left to be transcoded by the server.

On the premise that both WAV and AIFF are uncompressed formats. Thus the computational load of playing them back should be less than FLAC.

As to why I prefer AIFF - probably down to my choice of a computer - AIFF is native to Apple Macs.

OK, I don’t really understand Apple. My choice for WAV is because it’s closest to raw PCM & as such imposes less load on the streamer OS.
And big sorry, my “why” was asking for more description, not being controversial

i prefer the sound of aiff. Use pc for downloading, then nds and unitserve. I feel that it’s a very little bit better sounding than wav. Perhaps it’s psychological…