Is there a Windows equivalent of Airplay?

A friend is looking to stream from his computer to an amplifier/speakers on the other side of his room.
In the world of Apple, I’d suggest he gets an Airport express to plug into his stereo system but, he uses a Windows 10 machine.
Does Windows 10 have an equivalent to Airplay?
What kit would he need to buy to plug into his amplifier?

The Windows equivalent is generally considered as UPnP/DLNA.
A UPnP bridge or renderer is probably what your friend needs.

Thanks Simon. I’ll have a look and see what’s available for peanuts - he’s not hi-fi minded and is deaf in one ear as well.

iTunes for windows can play to an airplay device, so an airport express would still be an option.

There used to be Airfoil, but unfortunately it is no longer supported (https://rogueamoeba.com/airfoil/windows/)

Your friend can download a copy of Airfoil from Rogue Amoeba, I am sure it works fine since the windows version was first released in 2006.

A Yamaha WXAD-10 cheap at under £150. Easy to set up and will work with windows 10 as long as home sharing is on. Supports hi Rez Tidal Qobuz. And the apps not bad either.

Thanks for the suggestions. It appears that there is no native audio streaming (like Airplay) in Windows and that 3rd party is the way to go.
Regarding using iTunes and airplay, unfortunately he tends to use YouTube as his music source and has a playlist of his favourites, so he really wants to be able to do that but though an amp and his existing ceiling speakers…
@SteveC The Yamaha WXAD-10 looks interesting but, how would a PC connect to it? Bluetooth? Would a Windows 10 machine have Bluetooth? (I’m totally out of touch with Windows). 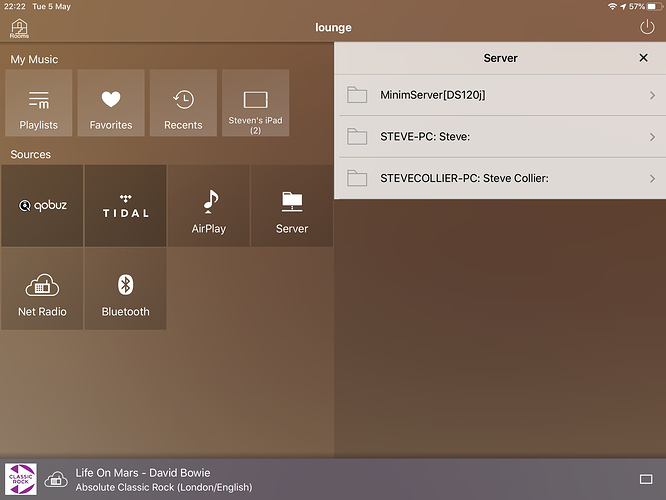 computer used as a server

Thanks but that doesn’t get the actual music playing through my friends amp and speakers from YouTube.
I believe I’ve come up with a plan to use a simply audio cable to connect from the PC to his amp and speakers. Simpler than trying to wirelessly do it !!

Thanks for the suggestions. It appears that there is no native audio streaming (like Airplay) in Windows and that 3rd party is the way to go.

Other than UPnP as I stated at the start. Windows devices can send media to a renderer … UPnP however is far more flexible, Airplay is a lot more restrictive as it is intended for a different use case within a more limited Apple’s ecosystem.

This is a list of UPnP AV media servers and client application or hard appliances. List of NAS manufacturers – there are many uncatalogued NAS devices with UPNP. A UPnP client, also called a control point, functions as a digital audio/video remote control. Control points automatically detect UPnP servers on the network to browse content directories and request the transfer or streaming of media. A UPnP media renderer performs the actual audio or video rendering. Control points and media rendere...

Does that mean UPnP is wireless, a part of the computer that sends the signal to a receiver? As is this case with a Mac and Airplay?

It can be, yes, it works via wifi or Ethernet… just like Airplay.