I currently test custom made thick wooden (4cm) and acryl (1cm) boards with IsoAcoustics feet and oehlbach pucks-spikes/shock-absorber. Naim equipment seem to be really sensitive and results can be assessed by the smell (not joking). When isolation is not enough there is some smell from the transformer. 20mm acrylic board is on the way.

A really interesting topic, which exercises several of us.

You may want to see the threads on isolation platforms and turntable supports. As several of us have discovered, rubbery feel directly under (say) a suspended turntable from Glasgow are a terrible idea, but solutions involving rubbery feet & chunks of granite (aka isolation platforms) out-perform a traditional wall bracket or the top shelf of a Naim Fraim.

For my NAC52 and CDS2, I will be collecting HRS feet tomorrow to put between granite shelf and box. We found an even bigger effect putting these feet under a Superline, though the salesman expected that power supplies and digital sources would be benefit more (not what we heard). We also found their metal/ rubber top plates improve things on just about any olive and classic Naim boxes, esp. as volume rises.

Which isolation platforms benefit most/ least from rubbery feet will probably depend on what feet they come with, but there are radical differences in approach between (say) the ‘light and stiff’ tradition (see Max Townshend or Torlyte) and big chunks of stone or wood.

To see the ‘full Monty’ HRS approach, have a look at the posts by @916SPS and others.

I still have one piece of laminated glass - the LP12 sits on its feet, resting on glass, resting on HRS feet, resting on granite, held by the wall bracket. This result of trial-and-error seems to work a lot better than the standard shelf or Naim cups and balls, but I want to try acoustic glass and acrylic sheets too. What acrylic material are you using and where did you get it?

Yep stiffness can be achieved in many ways. The rubbery feet are under my integrated, so it stands on double rubbery feet. The Transformer smell is completely gone.

I think Sorbothane has similar properties as acrylic. @Xanthe should confirm or not.

But it also depends on how the tt is made, light or heavy, suspended or non suspended.
I haven’t tried it but it looks nice.

@Ivo - I expect to collect a piece of Acryglas XT tomorrow. I will try this out as a possible replacement for the laminated glass (or MDF board) that supports my LP12’s feet. If it’s no improvement on the glass (or worse), the total cost of finding that out is pretty minimal, so thanks for the suggestion.

@frenchrooster - thanks for the picture.

When I did the recent experiments, I expected the ‘right’ answer for suspended and unsuspended decks to be different, which still seems reasonable. I also expected that glass, rubbery feet and a record clamp would all make an LP12 worse - I was completely wrong on those.

By comparison with your picture, every layer I have is a different product/ material to the one shown. However, I am interested to see that the overall solution is very similar indeed. Mind you, the picture is a good deal more elegant than my efforts.

There’s even better, probably better, as it uses also magnetic levelling, and the platform itself, made of tempered glass. 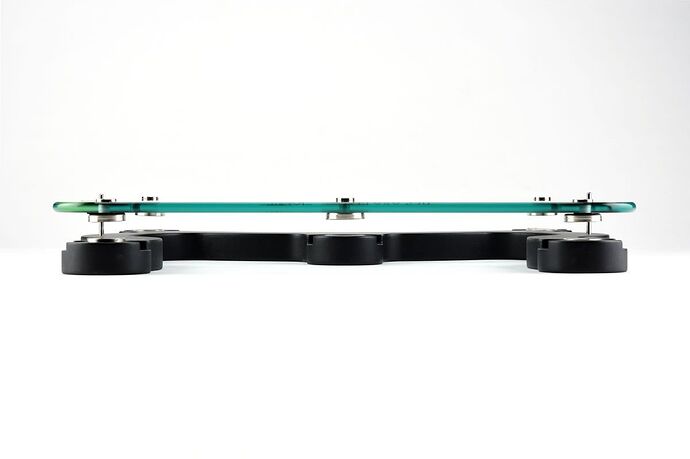 Then you have Wave Kinetics platforms, much more expensive. And the state of the art are those used for high microscopes. Don’t remember the name, but it was around 6 k for one platform. Some rich owners use them with the SME 20 and 30. 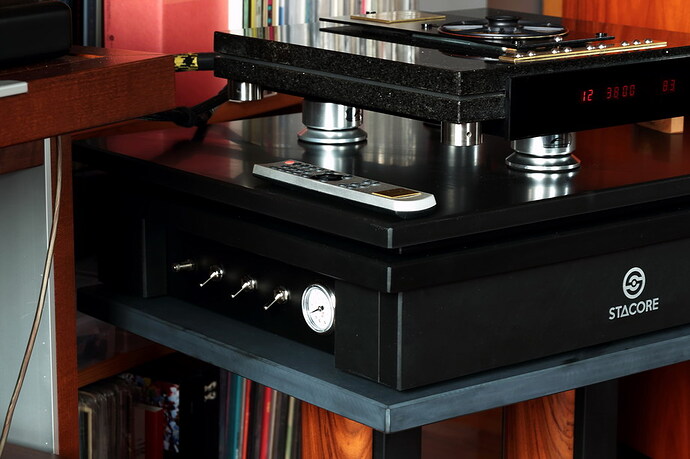 This can be very cool. Magnetically levitating means that I can put lots of weight on it and the table/rack/nightstand won’t carry any of the weight. So the rack itself can be light weight and very finicky?

If all devices are on such platforms, I can move everything at once, by just moving 5kg rack?

I imagine you can move the rack easier because there’s less weight.
But having each component on a SAP platform will cost you 1200 euros per shelf. Ouch!

I like the idea of the weight vanishing due to magic, which is how I read the comments at first….

When isolation is not enough there is some smell from the transformer.

I’m intrigued. Are you sure it’s not the surface underneath the item that’s warming up and giving off a slight smell ?

I don’t agree with you on this. How many isolation platforms have you auditioned?

HRS platforms work exceptionally well without anything other than themselves. They have weight specific feet that work with various weight tolerances whether on the lighter or heavier side of the unit.

Adding HRS nimbus assemblies to the platforms enhances the effect on some components, but not all in my experience. I don’t use the assemblies under my LP12 but it does sit on a HRS platform and the benefit is very evident.

You shouldn’t be smelling anything - bit worried about that

This way I can change the feet and introduce more levels of isoltion.

It is not a burning smell, just a little bit of a smell from the fron of the amp. Maybe like warm metal cable smell.

This is not good … makes me very unhappy. But just the thought of suspending a big amp in a magnetic field and making the weight “ disappear “ sounds truly magical.

Try HRS - a different level to any of those.

As mentioned, many clever platforms have clever feet as an integral part of them - HRS and Townshend products obviously apply. I can envisage that in some cases adding extra layers of isolation not intended by the designer or removing those feet may confuse things.

I think that that sort of ‘suspending your suspension’ issue is why both @916SPS (Hi Pete!) and I have found the best sound if the feet of our LP12s sit on something rigid, without Nimbus assemblies or some other clever feet to support the LP12 directly (i.e we don’t by-pass the Linn feet). Those with unsuspended decks may well conclude differently.

I’d also be surprised if adding a different company’s feet under (say) a Zazen or Pro-jekt platform was an unalloyed success, though I’ve been wrong before. However, if your isolation platform is (say) a chunk of maple or slate or granite (or at the other end of the scale Torlyte), I’d expect it to cope with some frequencies much better than others, so clever feet optimised to address a different issue from your platform’s forte would be well worth investigating.

In an ideal world, a few of us could do the experiments and give a definitive answer for everyone. However, there are many variables here (starting with how good your ears are, how much you notice small differences, how loud you play music and so on). Thus, even if we all had the same boxes, rack and living room (probably the most obvious variables), we would still probably disagree on what sounded better, by how much, and what the difference is worth in £.

Given that, trying one or two options yourself unless everything (including room shape and the listener) are in every sense pretty standard makes a lot of sense.

I am still surprised that so many here have simply found something that works (and in the case of all the Fraim-users in particular I’d accept it is one that works well in most situations) and then never questioned whether it could be improved meaningfully. We don’t do that with speakers or speaker cables or power supplies for streamers…

Do let us all know if and when you reach more conclusions.

Finally, I have been thinking about the smell issue you raised. My own experience is that some isolation (e.g. HRS plates more than the Nimbus feet) seem aimed at just the sort of vibration that hifi boxes get when sitting in front of the speakers - so, the louder the music, the more obvious the benefit. Doubtless, there will be other sorts of vibration that excite things in much the
same way.

If you gently vibrate a dusty old transformer, you presumably shake off some of the dust. The less it vibrates, the less dust gets released. Is that perhaps creating the difference in smell?

Of course, there is an entire school of thought that contends that all this is irrelevant because a box with no moving parts (apart from electrons) cannot possibly have performance affected in any way by isolation from vibration. However, my ears disagree, and so (presumably) does anyone who owns an interconnect cable with floating pins.

I think that that sort of ‘suspending your suspension’ issue is why both @916SPS (Hi Pete!) and I have found the best sound if the feet of our LP12s sit on something rigid, without Nimbus assemblies or some other clever feet to support the LP12 directly (i.e we don’t by-pass the Linn feet). Those with unsuspended decks may well conclude differently.

With you there Nick

Magnetically levitating means that I can put lots of weight on it and the table/rack/nightstand won’t carry any of the weight. So the rack itself can be light weight and very finicky?

I’m not sure this is right. The table or whatever is still suspending the platform and whatever is on it surely?

But the thing is suspended in the magnetic field. It shouldn’t be felt by the table. If you hold 50grams over the scale it doesn’t feel the 50grams. I think is the same.

@Ivo - it is worth thinking this through a bit, or getting hold of a couple of magnets and a scale and having a play. At least if I’m reading your posts correctly, and apologies if I’m not.