It makes you wonder sometimes 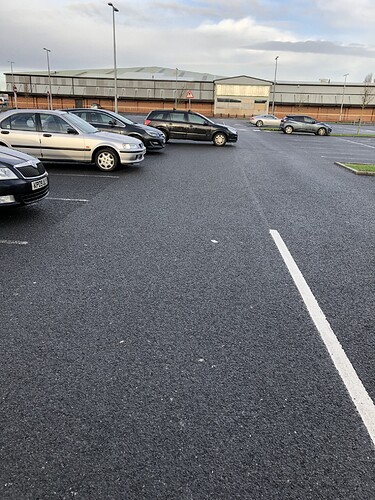 There’s an old lady who parks near us sometimes or she did before the pandemic. She just stops in the middle of the road and gets out, she is very old so I suppose I should give her a little slack

A half blind 89 year old put me in a coma on life support. There are many on the roads who really shouldn’t be.

It’s The Dude getting fresh yoghurt.

Many years ago I parked at work in my usual position reversed into a space at the building side of a slightly sloping carpark. A couple of hours later I was in the boss’s office discussing something when he happened to look out of the window - and asked if my car was supposed to be like that? Like that was parked bumper to bumper with a car parked on the side of the carpark opposite the building, and blocking passage through the car park.

It turned out my handbrake was not as good as it should have been, but fortunately its resistance had allowed only slow rolling so whilst it was touching the other car there was no damage at all , other to my composure (it had been the boss’s car parked opposite mine!).

Noting a slight slope in the above photo, I am moved to wonder if it was the same cause.

Asda’s carpark is full of cars parked like that today.

With snow all over the floor it’s not easy to see the white lines.

Notice only 2 cars are parked correctly.

It’s the ones which are moving which really scare me!

If she is not able to park properly, what else can’t she do? If a child ran out? if she needed quick reactions?

It may be that the driver didn’t fully engage the handbrake. It’s sometimes all too easily done, and without putting the car in gear, creeping forwards (or backwards) is the inevitable result.

I was reminded of this just a week or so ago in the car park of our local Co-Op as a driver parked her car and got out to open the rear doors to get her children out, only for the car to start rolling backwards. It was on a slope so in a couple of seconds it picked up some speed quickly and in only about 10 yards or so it crashed in to another parked car with enough force to concertina the bumper and tailgates of both vehicles. Obviously it was highly distressing for the driver as well as the children. IIRC the children were screaming even as she opened their door, so possibly she was distracted by this, luckily without any fatalities resulting from the accident.

I agree, I think most people around here have questioned that but other than the parking she seems a very capable driver, I’m told she puts her car away into a very tight garage, it seems she has a very strange attitude to parking