Aldi seem to have the large ones back in stock, just ordered, missed out last year:

Came across this yesterday in Panama City. Would buy one if I didnt already own a big green egg. 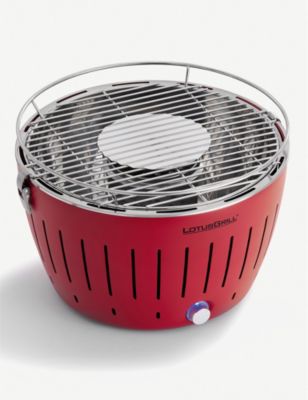 To get the most out of (guilt-free) alfresco dining, it's best to invest in Lotus Grill’s smokeless barbecue. Forget the fuss and mess of dealing with gas bottles or bags of charcoal: the patented design creates a bellows effect, forcing air over the...

I was very tempted by one of those a few years ago - compact and I’d imagine great for camping/local holidays in addition to home use.

…Would buy one if I didnt already own a big green egg.

I was considering a Big Green Egg for the summer having missed out on Aldi’s version a few times now. Somehow just managed to get an order in, they normally sell out very quickly. Doubt they’re as good as the Big Green Egg/Kamado Joe’s etc but the price makes the Aldi model worth a shot - neighbours managed to get one last year and seem very happy with it.

I have made very good experience with a Monolith Le Chef. There are other more compact models from this brand. 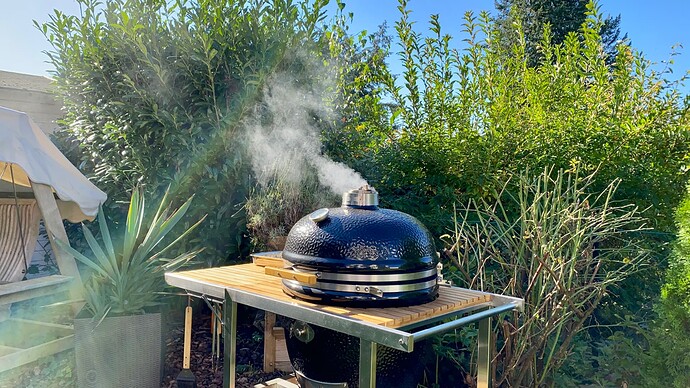 After a Kamado Joe I switched to a Primo Oval and really like it. I machined some stainless adaptors to fit casters to move it around on the terrace. 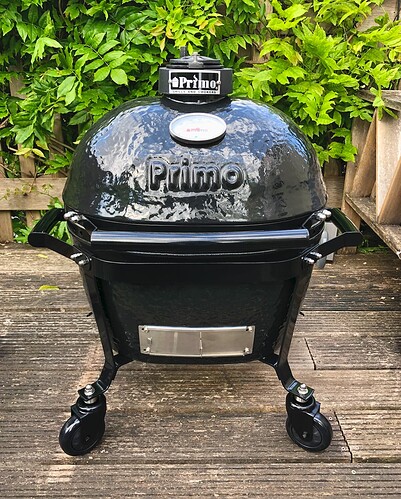 Very smart. Had not heard of Primo before.

Another vote for Monolith. I have the Classic BBQ Guru edition, with the same trolley & all the accessories. Fabulously well made and unlike some of the competition all the fittings are thick, high quality stainless steel. Perfect for the ~UK weather as it’s fast too heavy to be wheeling inside whenever it gets cold/wet (which it does often on Exmoor!).

After a Kamado Joe I switched to a Primo Oval

Ooh. Judging by the size, was that a Joe Junior before? What’s the biggest improvement from your perspective? (apart from being able to put larger rib racks on it)

I had both a KJ Joe Jr. and a Classic.

The improvement comes from the oval shape. Two-zone / direct-indirect cooking works clearly better. Due to the way the air circulates in the oval shape, the two zones behave more ‘separate’ and can be regulated more accurately.

The US made ceramics are thicker and heavier than from KJ or other Kamado’s I know. The two (split) grates are black enamelled making cleaning a lot easier than bare stainless. And the enamelling lasts too. 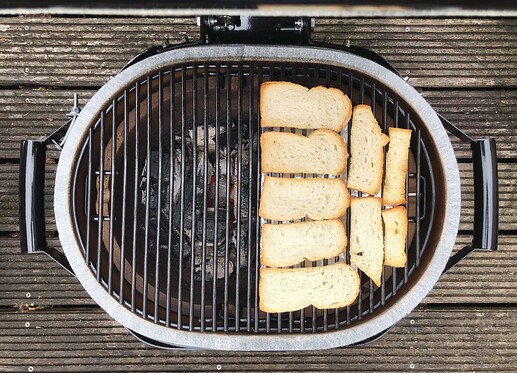 All in all - it’s a rugged, heavy, high quality piece of kit. Very happy with it.

Mine arrived today and is currently in a large box partially obstructing the hallway.

It arrived earlier than anticipated.

I almost cancelled having seen some interesting options compared to the premium brands and the fact that it still seems to be available which is odd - I think this reflects the fact that a £400 BBQ is low on people’s priorities with energy price hikes and other cost of living stressors. Either that or something has changed or Aldi have secured considerably more stock.

Did you get one Dave?

Mine arrived weeks ago and has been in the box in the hallway (impressive cardboard box/pallet) and I’ve only just mustered up the energy to unpack this weekend.

The finish has a few imperfections but I’ll live with that.

Stand relatively easy to assemble but the self-adhesive gaskets to stop the ‘egg’ scratching I assume are useless and I can’t peel off the backing and had to glue them on!

Bottom vent seems a bit iffy too, doesn’t fit perfectly but won;t be an issue in practice I don’t think. The rest of it is really well made though easy to scratch the surface with the supplied spanner so I’m holding off some bits untilI find a socket set.

Currently trying to cure the bloody thing - bought some big green egg American hickory/oak charcoal from the local stove company thsat also sells their Kamados. Awfyul charcoal - all tiny bits apart from a few larger pieces at the top of the bag. Premium charcoal my arse. Yet to open the Kamado Joe bag I got at the same time but feels as though that may actually have big lumps!

Wish I’d gone with my gut instinct not to light the charcoal with newspaper as the paper dust is awful. That said I wasn’t sure that strating some charcoal in an old Weber chimney started and pouring it in would be safe, suspect it would but who knows.

No, I chickened out, (see what I did there), at the last minute and cancelled my order.

I came to the conclusion that the wee one copes fine with 4 / 5 of us, given that we don’t need or want the food to be ready all at once, preferring to stretch the whole barbecue / beer experience over a long, lazy afternoon.

Didn’t stop me buying another mini Kamado from Lidl though … … … just in case, you understand.

Weather’s picking up, and it won’t be long now!

Bottom vent seems a bit iffy too, doesn’t fit perfectly but won;t be an issue in practice I don’t think

I know I’ve said this before on this forum at some point, but thought I’d mention it again. The single whole point of the ‘Egg’ method, it’s to seal all gaps completely and only allow air into the vent at the bottom and escape through the top vent. You’re trying to slow cook/smoke the food at a low temp with the absolute minimum amount of new airflow. New air and venting only dries out the food. One reason the Egg and a few good others are expensive is that sealing everywhere takes a well made product. To give you an example, when I’m cooking on mine, the bottom vent is open about and inch and the top is only about 1/8 inch. Adjusting the top vent by an 1/8 makes a big difference to not only keeping the wood burning just right, but keeping the inside temp at a constant 130c.

If there are any gaps in the vents or seals, it won’t work as supposed to and is just a barbecue with a lid.

FYI never use any petroleum type lighter, or the egg is as good as finished. You’ll never get the smell out of the ceramic.

I think the bottom vent will work fine in all honesty, it’s just not as smooth in operation as I’d like, may try to tweak it a little when it’s cooler as I’d be able to remove the vent assembly or without even doing that if I (ok two of us) lift it off the stand.

There will inevitably be compromises with these budget items, it seems extremely well built generally and the top vent is very good quality, the bottom one seems cheap though will control air flow.

I was potentially just going to go for one of the brand leaders but when I saw this item available just took the plunge as it’s normally out of stock, and for a quarter of the price perhaps I can write it off should I choose to upgrade at a later date.

It’s been discussed before, but any readily available charcoal you like? Sourcing local charcoal is not always easy, but I have to say the sack of Big Green Egg charcoal I got a few weeks ago is awful tiny bits.

I don’t really like this Big K stuff but their ‘premium’ charcoal at least has decent sized bits compared to the green egg ‘premium’ bag which only has a couple of large pieces at the top. 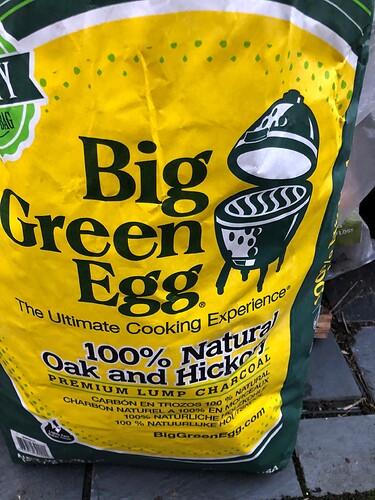 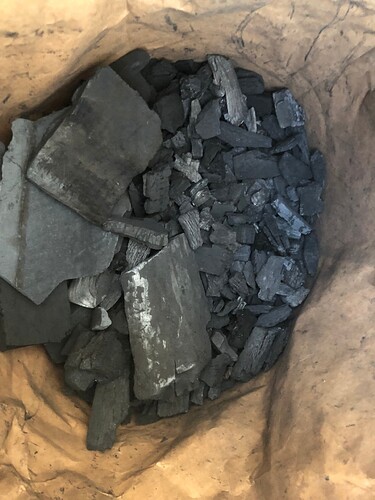 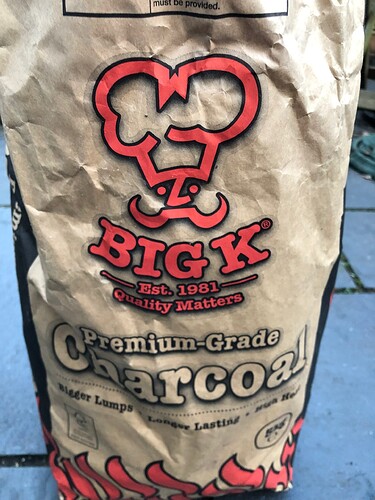 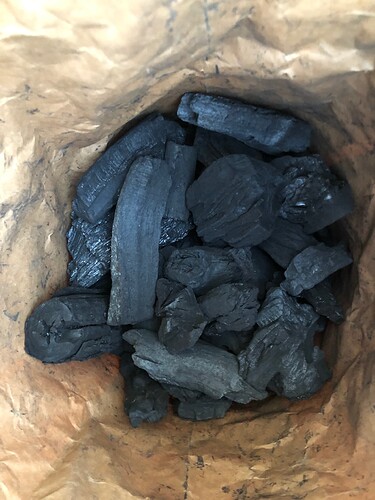 Would love to try some Binchotan charcoal. Anyone used it in the UK, I’m told UK prices are extortionate.

I like both of those you’ve shown. I like the Egg charcoal. By the proportions you shown, if it’s all like that I think you’re just unlucky with that bag. It’s good to have the small pieces inside, as that’s what you use to get it going.

I would avoid any cheap unbranded ‘restaurant’ grade, as it’s probably rubbish. I had some apparent restaurant grade stuff and it was awful. I’m convinced it took over a year of cooking to get rid of the awful flavour impregnated in the walls of my bbq.