Anybody answer this question most kudos titan speakers seem to be up against the wall in the system pics section why is this.

They are fairly easy to place. For domestic harmony placing nearer the wall rather than further out into the room is a worthwhile compromise for some. When i have heard them on demo, they are normally 1 to 2 feet out from a wall……each to their own.

The Titan uses fixed boundary loading. The port fires into the fixed boundary gap between the speakers meaning that it does not interact with the rear wall in the same way as others. I had wondered this myself and had a look at the manual. So in short, probably less susceptible to room gain when moved close to the rear wall.

A very good move for a company making loudspeakers in a country where smaller living rooms are common. I assume it works well as many are placed like this.

Yes that make sense but is their depth in the sound… stage when back that much.?

I feel there are always negative aspects regarding depth and spaciousness when speakers are that close to the wall. I read that the same goes for Naim speakers which are designed to be used that way. Maybe someone can correct me if I’m wrong about this.

Sometimes placement out from the wall is not possible or not allowed by spouse and I can completely understand that. In that case, the increase in room gain might render most speakers unsuitable. It’s great that there are these high quality options for this case.

From what I gather, the kudos still perform at their best when in a bit of space though.

Actually the Titans have been praised for their soundstaging abilities, not normally a Kudos priority.

With their backs to the wall ease of placement and no loss of spaciousness and depth perspectives, maybe they have come up with a speaker able to do a perfect mix of musicality with ‘hifi’ niceties too.

And well suited to the more modest sized UK living room too.

Sorry don’t get me wrong, I am sure they have fantastic sound staging ability. My speakers use pretty much the same drivers and they are brilliant. I was only saying that distance from wall most likely effects sound staging even if only a small amount. 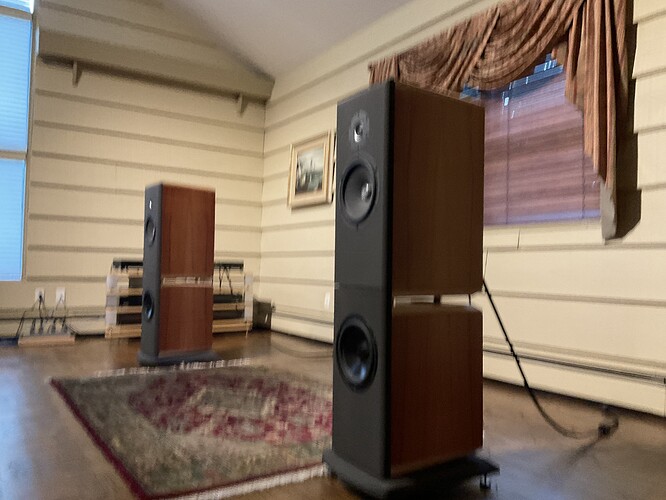 Mine like a little breathing room
Maybe not the latest Titan but they sure sound good….really good.
David

Sorry for the lousy pic quality

Sorry for the lousy pic quality

I hope the music is clearer than the picture…

I bet they sound great with that space around them. I tried my speakers pulled right out and they sounded great. They just can’t stay like that though as we need the room for living

negative aspects regarding depth … when speakers are that close to the wall. I read that the same goes for Naim speakers which are designed to be used that way.

I never had my (non-Naim) speakers against the wall to compare, but Audio Physic, the German speaker manufacturer, are offering this explanation for why depth supposedly suffers in this placement:

Let us say another word about the general concept of spatial perception. If you enter a completely dark room, you will immediately know the approximate size of the room even though you cannot see to orient yourself. You therefore rely on spatial information and relate to small sounds. The knowledge we have obtained about the size of a room generally helps to prevent that we perceive sound from music reproduction as something coming “from behind” the back wall.

So possibly reflections from the rear wall prevent the illusion of space beyond the boundary of the wall.

Kudos recommend 20-45cm from a rear wall and at least 45cm from corners. I’m still experimenting with final positioning but have found that they are happy being sited closer to the rear wall than that. No issues with soundstage or depth, but then again that’s not a big deal for me. Our choice of room layout and the system also being used for TV/Film sound means that speakers need to be able sit close to the wall, so true free space designs are out. Aesthetically, this way works better for us too.

Is it Implying that if blindfolded then you couldn’t tell?

No, they are saying that your ears and brain have an idea of the room size even if you enter the room blindfolded, because the brain builds a model based on how the room sounds, reflection times, etc. This part it is certainly true

Indeed that would be right for the biggest Titans. I would say if you’ve got a room big enough to host the 808s then you’re probably not going to need to use them close to a wall

Okay so not the latest Titans!

Previous speakers being Linn Saras & Isobariks, the mantra was ‘follow the tune’ and that continued to be one of the benchmarks when changing to the Titans approximately six years ago, placing them close to the wall (though not as close as the Isobariks).

Seeing other forum members off the wall Titan placements I decided to experiment for myself, this revealed a convincing soundstage, but still retaining everything I had come to enjoy in my listening.

Hence my view is, yes Titans are room friendly and work in close proximity to the wall but excel when given room to breathe.Soundstage was never the main criteria for me, and still isn’t, but one doesn’t need to be at the expense of the other.

The introduction of the podiums and absorbers came later. 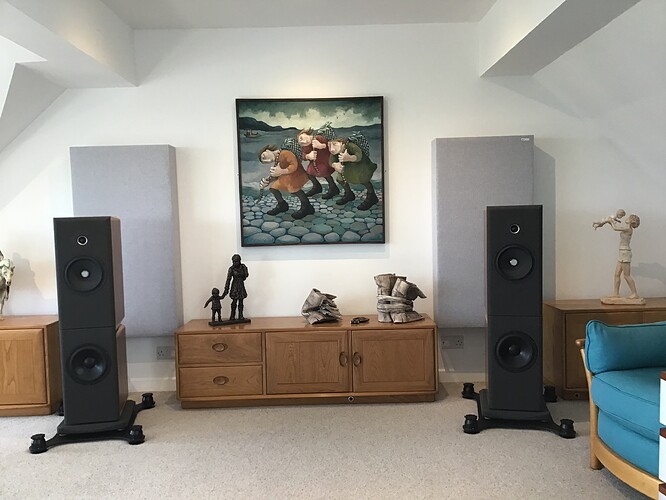 they are so easy to place, only moved mine once since they arrived