Linn Isobariks risen from the grave!

I was fascinated to see on a certain auction site that brand new Linn Isobariks are available custom made to order by a specialist UK company. Yours for a mere £24,500. Now where’s my cheque book…

I’ve never understood that pricing. It’s not just the speaker pricing which is bonkers either - he was selling a 6-pack of 250s or 135s a year or two ago at multiples of the going rate. Maybe he gets the occasional speaker sale which, at those margins, covers the profit from a dozen or more reasonably priced sales.

Yes, as good as the Isobariks were one would have to be absolutely desperate to acquire them at that sort of pricing. Of course if you have the money to throw around then why not - but you would have to carefully consider what modern speakers can be had for similar money.

The other thing that I notice is that he mentions them being ‘upgraded’. That would concern me if I wanted a pair. The originals were one thing, but what of an ‘upgraded’ version? One man’s idea of an improvement could well be another man’s perception that they had been robbed of some important defining characteristics.

I don’t trust his ears to improve something that Linn spent many years refining. Are these modern B110 copies any good? Is he applying the various modifications that Linn made to them? How does he even know what they all were? I’ve communicated with one person at Linn during the Isobarik period and its sometimes difficult for him to recall all the details, 30-50 years later.

I would rather buy a one-owner pair from a dealer that knows their history and how likely they were to have been thrashed, kept in long-term storage, or have drive units with long-term exposure to direct sunlight. Would cost a couple of grand instead of 24 ! It’s not that rare to find Brik owners that kept played them daily for decades before passing away, or upgrading as a retirement present. Examples like that can still sound really good - Kans too.

Makes me wonder how far the spec of these new ‘copies’ actually matches the originals. As you say drive units and also things like passive crossover components, not to mention the details of cabinet construction. Saying they are ‘upgraded’ may in reality be another way of saying that they are different because a number of the original components are no longer available.

Unless this guy actually worked for Linn Products or somehow has access to inside information it is difficult to fathom how he is able to get everything exactly authentic. Even dismantling an old pair wouldn’t necessarily tell the whole story.

Presumably most customers buying a pair will be Isobarik enthusiasts so will know what to listen for. If all is not well they are unlikely to shell out!

I have a pair of Briks that were ‘restored’ by the Guy you are referring to. The cabinets were originally very tatty and been painted white!! They were resprayed black and the mid and treble units replaced with the Falcon replacements for the originals. I certainly don’t have any complaints about how they sound. This is my 3rd pair. I’ve had some conversations with him around upgrades and refurbished cabinets and have to say he’s great to deal with and very knowledgeable about the Briks. He does offer the chance to listen to his upgraded Briks before committing so he has confidence in his assertions. As to the prices on eBay, who knows. Maybe it discourages the idle and time wasters. I certainly didn’t spend, nor would spend, anything remotely like that though.

As a postscript, I recently heard the Kudos Titan 808s, admittedly not active unlike my Briks, and don’t feel I’m missing out to the extent that I have a burning desire to change.

Interesting to know and glad you are pleased with the results. It seems he knows what he’s about anyway.

I think the Briks, like the Kans and Saras, were something very special. Very much ‘of their time’ and, very sadly, with no real equivalent in the modern world.

Klipsh la Scala risen from the grave, but made with modern components.
Would you buy them 15 k?
Like Linn Isobarik, people find them special. 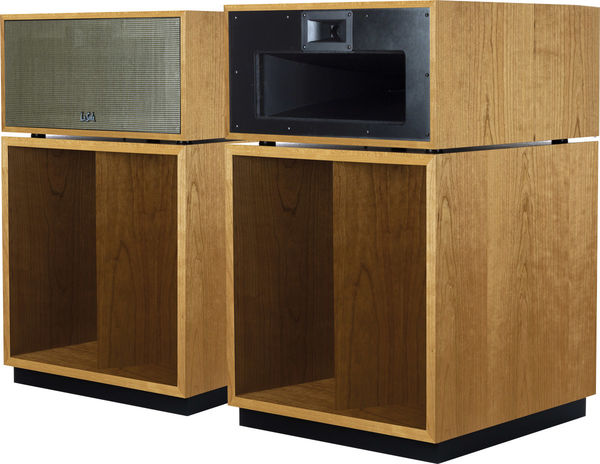 If I had the cash and the room to accommodate them then I would buy them without hesitation. I own the Klipsch Forte III’s which are two models lower down the range. These are about the same size as Isobariks and they are very special indeed. They give an incredibly live sort of sound with fantastic immediacy and speed. Not to everyone’s taste - no doubt some may find them a little too ‘full on’. But they are incredibly addictive and involving.

I believe you. I don’t doubt they sound very special. The look is another thing however.
Do you use or used tubes amps with Klipsh?

I spoke to the guy who does these was not impressed…this guy needs avoiding, not a good experience. The demo set he had working were tri amped…he thought they sounded amazing…ugh…no. They sounded very old fashioned - slow and heavy in bass - with a sort of wooden coloration the mids and highs were nothing special - and certainly not open. He had a rather a nice set of LS35a’s which to my ears sounded far better… I think the old Linns are a product of their time…and speakers are so much better now… even at a 3rd the size…

Having said that - there are devoted Barrik fans … and the guy in question may not have optimally positioned his Isobariks… but he was demoing them and is kind of a dealer … so you would think he would have optimised the position.

No I don’t use tubes. Ideally I probably would, but I didn’t want to get involved with all the inconvenience of tube amps, ie. warm up, replacing tubes etc. etc. Just my feelings. I use a Sim Audio Moon 340i integrated amp which sounds lovely and smooth, slightly laid back but very dynamic and involving and very forgiving of poor recordings. I feel it suits the Klipsch’s very well. Naim amps I’m sure would be a complete mis-match. Shame, otherwise I would have gone back to my roots. But I really wanted the Klipsch’s so had to go in another direction.

The most important is that you enjoy listening through your system.
However, if one day you could try something like an EAR V12 on your speakers, you may be very positively surprised.
Tubes are not expensive and can be replaced after 5000 hours.
I have my Ear preamp since 11 years, without a single problem. I replaced once the tubes. The service costed me 120 euros.

Interesting to read your comments on the sound. ‘Slow and heavy in the bass’ doesn’t sound like the Linn Isobarik sound. ‘Wooden colouration in the mids and highs’ and lack of open-ness yes - the classic Linn speakers were certainly coloured.

Are you familiar with how Isobariks sound or was the demo you had your first exposure to them? What I’m thinking here is that if you are not familiar with them or with the Kans and Saras then they may well come as quite a shock compared to modern speakers. They have a completely different set of priorities and as you correctly say, were of their time. Most modern speakers I find are balanced far more brightly and perhaps the ‘duller’ balance of the Brisk may have contributed to your feeling that the bass was heavy and slow. I don’t know. What source was being used?

I saw a pair of these while visiting Audio Gold in London last week (a fascinating shop by the way). A friend of mine was auditioning speakers, though sadly not these. I was struck by their size - huge things.

I’ve had my active rosewood bariks (6 x 135’s) for about 32 years and i have intension of replacing them. They’ve been loved and polished every week and have a glass finish. One of the speakers (both) tweeters got distorted and failed within the same time ( i was told which was unusual ) after 10 years. But they have been good since and of course the foams have turned to dust.

BTW, of the speakers my friend did audition at Audio Gold, the new Rogers LS5/9s were superb. Very impressed.