Anyone using an AQM particularly with respect to PM 2.5 particulates?

Just ordered a cheapie one from Amazon which even if not that accurate should still give some insight into potential changes during the day/evening.

In the last couple of years when using the log burners quite extensively I’ve noticed but wanted to dismiss feelings of dry/sore throat more frequently than when they’re not in use putting it down to seasonal viral maladies.

Naturally log burners reduce humidity by using up internal air and replacing it with ‘fresh’, so maybe the air is too dry at times, but I surmise that different fuels may be partly responsible - compressed sawdust logs and manufactured coal ovals/briquettes being worse than wood/peat or traditional coal subjectively.

This may be bull of course, but I’m also wondering about particulates entering the room when you initially start or refuel a fire. The last couple of nights have been extremely windy and seeing/hearing the effects on the log burners has had me wondering if strong winds periodically force products of combustion into the room via expulsion through the air inlets or less efficient older rope seals.

The top down lighting method seems to make sense when starting as less smoke is created, but when re-fuelling you can’t really do that.

This video was interesting: 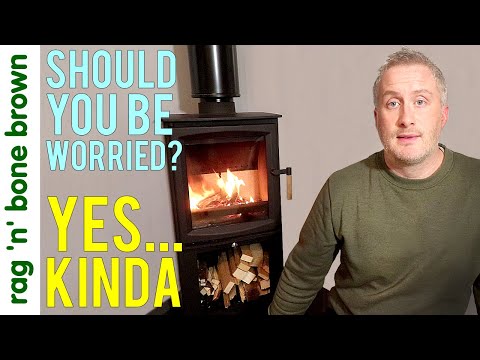 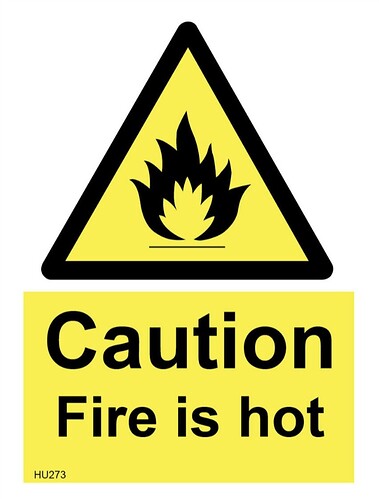 Equally, humans have lived with real fires for millenia - perhaps we never evolved adequate mechanisms to deal with such things - probably because other things killed us even quicker!

Chap in video is a woodworker it seems and uses one to detect when particulates in the workshop reach levels where it would be sensible to don a respirator of some kind.

Interesting video. I have a downdraught issue with my Clearview on windy nights, not much I can do about it without major surgery to the flue and roof so I have to live with it unfortunately but it is a worry, the room is large but can get quite smokey after a few big gusts of wind, the door seals on the stove are the worst culprit. Perhaps I should get a monitor but I’m scared to think what the results might be.

Have you ever changed the seals? My Clearviews are maybe 6-7 years old, it’s only this year I’ve wondered if the larger one may be sucking in air via the door on the latch side - I can adjust the latch 360 degrees to make the seal tighter but it seems too tight for comfortable closure.

My 650 is 16 years old, I’ve changed the door seals twice and the last time was just back in September. Tbh the arrangement with the seals and doors is not a great design and despite been able to adjust the hinges I find it hard to get a really good airtight seal, as you rightly said the door latch can be either too loose or too tight, they need to have made the threads tighter for finer adjustment. I am thinking of fixing additional flat type seals to the stove body where the door closes in order to get a nice snug seal.

We had two Clearviews in our old farmhouse and my late brother , a nuclear engineer by profession , used spacers to get the seals just right .

I’ve wondered if I could get a better adjustment by loosening the handle grub screw and refitting to the shaft at 90/180/270 degree rotation, though the shaft does seem to have a depression in the standard fitting position. From purchase the handle on the larger Clearview always got loose as the grub screw kept loosening. It’s been fine since I replaced it.

From memory I tried that and it dident work for some reason that escapes me right now! Great minds!

If anyone has problems with windy weather causing downdraughts and smoke being blown into the room, I think they should stop using it immediately. Have a professional look at it. Carbon monoxide would be my main worry, particulates second, and gradual smoke damage to the decor and furniture third. (Eek, I forgot about smerk ganning into the hifi too!)

While I’ve never seen smoke blow back into the room directly it was the strength of wind the last few nights that was causing turbulent noises as it came down the flue - at some stage I guess it’s possible that as it buffets the chimney there’s a temporary chance of the wind strength exceeding the draw and causing small repeated incursions of invisible products of combustion, both particulates and CO.

Without wanting to teach anyone to suck eggs, you might not know if you are suffering CO poisoning. The previous owner of our place had a new wood burner installed by a respected company. Before he knew it, both he and his wife were feeling depressed and permanently tired. They hadn’t bought a CO meter, thinking a new installation would be ok, they’d buy one soon. Yep, a manufacturing defect was allowing a tiny trickle of CO into the living room, and could easily have killed them. A large leak will kill very quickly without you realising anything is wrong. Please, don’t take risks.

I believe they would be essential for modern installations to meet regs.

I’ve got 4 CO monitors downstairs - the only time one has ever gone off is when I emptied some hot ash onto an oven tray and placed it to cool on the hearth before disposing of it in a plastic bag - that really made me aware that you have no idea it’s at dangerous levels, and the ash barely had any glowing embers.

Some sites suggest you should also have CO monitors in rooms where an existing chimney or flue in use passes through so have recently put some in those upstairs rooms too.

Well, the monitor arrived (one similar to the video with several brands selling the same ‘homebrew’ looking device).

Bought pizza/chips/nuggets for the kids at the supermarket and had started cooking them before powering up the device. Combination of air fryer and combi microwave cooking.

Powered device up in an adjoining ‘cool’ room which gave me maybe 3-4 ug/m3 of PM2.5 particles.

Into the kitchen/living area and it shot up to 10-12 ug/m3, later reading almost 20ug/m3 upstairs after cooking.

Went to daughter’s bedroom where we’ve had a gutter leak and I have an air ‘purifier’ and dehumiifier - dropped to almost zero particulates with the door closed.

Next to ths study and maybe 3-4x levels of particulates than daughter’s room, so took the ‘air purifier’ into there and within minutes PM2.5 particles dropped to 0 ug/m3, and particles from maybe 500-600/100 ml air dropped to under a 100.

Accuracy aside it seems to give excellent relative pollutant readings.

A few hours after food was cooked in the open plan area I was seeing only 25% levels of PM 2.5 particles compared to when cooking despite 8 kWh log burner in use and a few vigorous opening/closing actions on the door.

Next took the device outside and the readings went yp by 150-200% - was this due to traffic or smoke from all the local log burners???

Next lit a match and extinguished it close to the monitor - PM2.5 particulates jumped from 300 or so to 60-70 thousand!

I suppose log burners take air in, so they’re going to let air out, no matter what seals or draw figure it has. Opening, adding fuel and cleaning will bring a load of particles into your room, ready for the next draught to lift them into your lungs. Put a torch behind that area and watch the dust created when you’re near that area. Some particles just aggravate your throat and burnt debris is high on that list. I find cooking steaks in the kitchen aggravates mine, although I am standing over them.

Plus, there’s gases produced which that meter won’t register.

You say you have air purifiers, have you tried putting one in that room? I have a Philips series 3000i and find it superb. Very sensitive, accurate and it works. Usually have it on sleep mode (low and near silent).

I’ve never smoked in my life

With all the interest in these posts about air quality I wonder how many of the owners are bothered now after having perhaps indulged for years in Cigarettes and Cigars or Pipes for that matter.
Nobody seems to have thought about that damage.
I can see the hazy room discussion all sitting round puffing and checking the particulate level now.

I have Philips air purifier. It monitors the air quality and sends a notification to my mobile if quality is poor.

The app displays historical levels, plus there is a link to a website that shows UK map with local AQ levels.

Refuelling is certainly a potential issue, but funnily enough I sat the AQM close to the burner last night and opened the door a couple of times and no significant change in PM 2.5 particulates which was encouraging but too early to say if that’s the norm or one end of a spectrum.

PM2.5 readings were much higher after cooking and dwindled over an hour or so.

I also noted higher readings outside last night, and there are certainly some locals burning stuff that doesn’t smell that great when our burners are not in use - maybe they feel the same about ours.

As for gases the meter won’t recognise, I may be working on a false premise, but if the particulates don’t change much I’d imagine I could use this as a surrogate marker for other compounds, though naturally I would not know the baseline for those which might be too high.

Interesting to see lots of monitors offering CO2 levels which it seems can increase significantly in unventilated rooms such as bedrooms overnight. In itself that CO2 might not be hazardous but if it resulted in higher blood concentrations we might end up hyperventilating or using metabolic pathways to reduce acidity beyond the standard set point.