An excellent documentary about a much underrated band led by Paul Weller & Mick Talbot back in the 1980’s.
Though I’m quite biased and although they blew hot and not so hot they made some excellent music that as a teenager influenced the music I’ve listened to in ways that are still coming through in the music that I listen to today.
Well worth a watch on Sky Arts catch up and I believe a triple LP has been released to coincide with the documentary.

I love the Style Council, the earlier albums anyway and in particular Café Bleu. I hadn’t realised that there was a Sky Arts catchup but have just checked and we can get it through Virgin, so I’ll watch the programme for sure. Thanks so much for highlighting it.

The new compilation has only two new unreleased songs, which is a shame, so I think I’ll give that a miss. A lot of the oddities are on the excellent ‘Here’s Some That Got Away’ album from many years ago, which I’ve always really enjoyed.

Nigel, have you listened to the new Paul Weller album ( on sunset). Mick Talbot cowrote a few songs and plays on the album…these tracks have a familiar Style Council groove?

I haven’t, no. I gave up on his solo stuff years ago I’m afraid. That said I’ve heard good things about On Sunset so perhaps should give it a go. It’s at times like this that subscribing to Qobuz would be helpful.

Again very biased regarding Paul Weller but On Sunset is very good and see’s a bit of a return to familiar territory and is much easier listen than say Sonik Kicks or Wake Up The Nation but his back catalogue over the past 5 years or more is all worth a listen if you have the time and access to a streaming site.

Highly recommend True Meanings…this is Paul’s melancholic acceptance of advancing years and the true value of things like family, love and friendships. The vinyl is a lovely thing to have.

That first solo album when all seemed lost and the last Style Council album Modernism: A New Decade was rejected by Polydor - just amazing. Marked a run of great solo albums up to Heavy Soul.

) but Style Council kind of passed me by it just didnt ring with me for some reason, maybe time for a revisit.
I would also recommend his work with Stone Foundation.
Street Rituals recorded at PW’s Black Barn Studios he features on a couple of tracks along with William Bell and Bettye Lavette. Great Mod Soul. 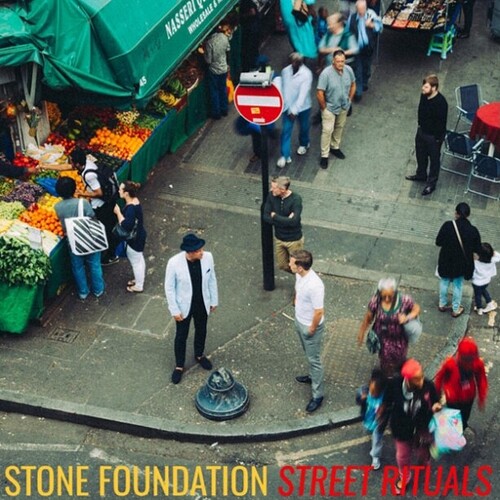 I just loved The Style Council and the Jam was lucky enough to see them 3 times including the last gig Dec 82 in my home town Brighton there is a photo of a 13 year old me with Paul at a sound check but it’s with my Uncle (I hope)
. I missed the late 70’s mod revival as I was just 10 but my older brother and Uncles had scooters and I just thought they where the coolest people on earth.

By the time the Style Council where in full flow I was 15 and copied all their clothes, cropped hair, stay press and loafers. The coolest pop band ever!

Then Weller’s solo career wow!!! saw the Paul Weller Movement at the Zap Club Brighton 90 or 91 incredible cover of Magic Bus and then that 1st solo LP just blew me away but Wild Wood was and is my favorite record of all time.

Slightly off topic but an old pic of me a few years ago when I played in a Jam tribute band.
Foxton basslines were a pleasure to play. 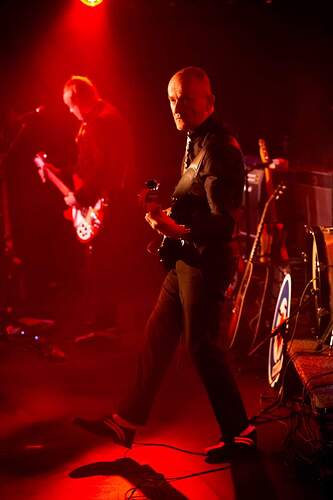 Love the Jam shoes! You lucky so and so.

That is my happy face… believe it or not

I missed the late 70’s mod revival as I was just 10 but my older brother and Uncles had scooters and I just thought they where the coolest people on earth.

I was just out of school up along the coast in Newhaven. Had Two Tone Tonic Stay Press, Champagne Shirts, Pork Pie, Parka etc listening to The Jam, Who, Specials, Secret Affair etc. No scooter but a couple of mates had them, I remember going to see the filming of Quadraphenia where those mates were extras.

Is the Long Hot Summers vinyl/cd set a complete anthology or a kind of best of retrospective?

Neil, I agree 100% with your comments… an excellent album especially on vinyl, from both the technical and most of all artistic point of view.

If were talking the True Meanings LP I went through 3 or 4 copies of the first press before giving up. Badly afflicted with some of the worst non fill I’ve ever heard, quite a lot of comments about it on Hoffman as well. I ended up settling for the CD

What is non fill?

Basically it’s a pressing fault whereby the vinyl doesnt flow properly in the press affecting the formation of the groove particularly at the outer or inner area of a records side. It results in that horrid ripping, like paper tearing, sssshing sound, often in one channel.
Difficult to describe but most vinyl listeners will be familiar with it. Hold an affected LP to bright light and you can see what looks like a minute string of Pearl’s along the circumference of the groove.

I’ve just listened to my new copy of Our Favourite Shop and what a great record.`