I have been the happy owner of an atom for a few months now. My only frustration is that the software seizes, too frequently for my taste. I mean, music plays from the last source, but the screen is stuck on a home screen. When this happens, the only remote button that works is the brightness button. The sole front panel button that works is the power button. The only way to reset is to pull the plug and reconnect. Is there a fix for this? As great as the Atom is otherwise, this drives me nuts! Thank you! Thanks

Thanks for your thoughts!

Welcome to the forum!

I do not own an Atom but can understand your frustrations, we all want trouble-free products.

Hopefully you have spoken with your dealer and dropped an email to NAIM support. Perhaps there is a software fix available or if its a defect the dealer can replace.

Good luck and hope you find some help to resolve the issue.

I understand your frustration too. You don’t mention anything in your post but I assume you have spoken to your dealer and tried powering off and on, if so the next thing to try is a factory reset.

If that doesn’t cure it then raise a fault with Naim, they will advise you from there.

There is new software being beta tested now that will hopefully resolve screen freeze issues.

I have an Atom and share the same experience and frustration. Supposedly Naim is working on a software fix but this has been going on for quite a while now.

I also had to send in my three month old Atom for service as one day the screen went permanently dead. It took Naim almost three months to fix this.

The Atom is great when it’s working but I have started looking for alternatives.

It’s one thing having an existing Uniti that you upgraded to the current flawed firmware but continuing to sell them in that state is unacceptable imo. Any new sales should be preloaded with the previous version as a matter of course.

From your comments and other threads, It sounds like the pending software update is what I need.

I can confirm we will be making available a new firmware release to address the screen issue. This release is imminent, we’ll be updating you with the details for this release soon.

I have the same issue with my screen freezing so I hope the new firmware is out soon and does resolve the problem.

Same here.
I’m a quite new owner of the Unity Atom but I’m allready on my second Atom and it failed the second day I had it.
What is worrying is that the problem seems to start with ver 3.2 around June 1 and have not being corrected yet nor have they informed me of the problem. I had the first unit in for repair in more than a month with no comments except it was repaired and working - within a few days the problems started again.
So even if Naim now says the are working on it - they have been for some time - the Unit is in fact defective and I on the verge of giving up and return the unit to find something else, though I would miss the sound and looks of this little thing.

You have not described the current problem on your current Atom. I recommend you contact Nail support who will be able to help you with help resolve this.

I didn’t describe the problem since it is exactly the same symptoms as the initial letter of this thread AIA.
I have described it very carefully everytime to the dealer who should have forwarded it to Naim. But do you mean that I should write to Naim directly - I thought it would be good to go to the dealer so he knows what is going on. Strangely he told me he sold over a hundred and I’m the only one to have the problem consistantly …

I would have preferred that that Naim was more careful when they released this system so I did not need to go through this serious problems with first the app (Android) and then the freezing Atom. I have soon have had this system for allmost a year and besides the good sound and looks I have never had a pice of equipment with som many annoying problems.
I have grown up with first Sonos and then Bluesound and even there have been problems they have never been close to the problems of this system.
It’s more than 3 month since this 3.2 software was released and the freezing display was very quickly discovered - why didn’t Naim see this problem during Beta ? - I suspect the use of the system is quite different depending on the user - I might be a troublesome user since I change input/music/level and scrolling forth and back which made the first 3.2 versions give up within a couple of minutes and freezing up. If it was left alone for some time 1-2 hours it would suddenly “come back” running all the missed commands. Later versions did not have this problem but instead it freezes at random times. It would in many times still work with the frozen display and IR if you just used the app (without being able to see what happens)

Lars, I’ve had almost exactly the same problems as you! It seems the Android app has been playing second fiddle to iPhone at Naim, perhaps because they focus on the “premium” ecosystem to the detriment of perhaps 70% of phone owners out there. My android app makes it almost impossible to search as the text randomly disappears or cuts out sections resulting in gibberish. And (for the love of God) there is no way to stop internet radio streams without turning the unit off. This drives me crazy, as it’s implemented on iPhone!
I did write to Naim and spoke to my dealer but pretty much got told “it’s really difficult to write software for Android because it’s different on every phone” which I suspect was a bit of a fob-off: there is core code which must enable most standard apps (WhatsApp, browsers etc.) to function normally.

I also have the screen freezing issue, and it’s good to hear there are enough others having the problem that they may be working to fix it. Now if only they could implement the pre-release screen layout which used the screen real-estate to its full potential instead of the awkward square album cover sitting in a rectangular screen. 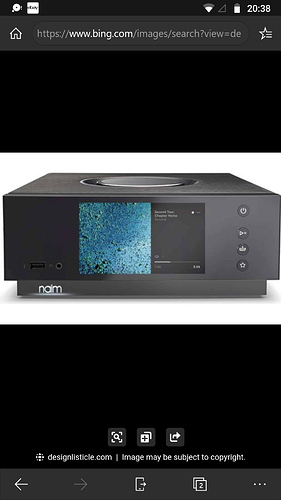 A workaround is to switch to an unused input.

I have been hoping for this too, but I now sort of lost patience with this and I’m thinking of getting my money back since it’s for me is more or less a defective product.
I hopes that getting a new one would help but it didn’t - as I write this I turned the Atom on to find the screen frozen on main menu - this has been going on for month now and the Android problem is one thing (have never tried the ios version) but freezing and sometimes not working Atom is quite another problem and I’m thinking they must have made a hardware mistake somewhere that makes the unit behave this way and very difficult to correct in the software.

That you dealer claims that Android programming is difficult is a ridiculous statement - is it ok to release a maybe working product if you don’t know how to make it ? (several times the remote control doesn’t work either)

I’m really saddened by these problems since I love the sound and looks of it - but paying this kind of money I do expect have a working system.

What I think is weird is that there is another thread in the bottom of this screen “The Atom is amazing” - I would like to know the firmware version and ser. no of these unit’s if they dont have any of these problems.

I did write to Naim and spoke to my dealer but pretty much got told “it’s really difficult to write software for Android because it’s different on every phone” which I suspect was a bit of a fob-off: there is core code which must enable most standard apps (WhatsApp, browsers etc.) to function normally.

It’s actually true, Android was never designed to make any allowance for running real-time code, so writing something like the Naim app is vastly more difficult than applications like WhatsApp or games etc. etc. etc…

In terms of the screen freeze, how many times have you had to reboot your PC?

I’m not saying that neither of these cases are working as well as they should be, but it’s inevitable that issues will occur with complex computer based systems. Naim are trying to fix them.

The problems with the android app are largely fixed provided your network, particularly the Wireless Access Point are reliable and properly configured for network discovery protocols.
However, there are still some issues with the display layout on some Android devices, but this is a problem on a device by device basis, and there are also other apps that can be affected by this, including heavyweights - for instance, in some circumstances, I have a problem with the display layout of Google’s Chrome browser on just one of my devices. If Google (who own Android!) can’t get Chrome to work perfectly on all Android device how do you expect other companies to achieve this?

If Android was never meant to run real time code, then how come that neither my 10 years old Sonos nor my 4 years old Bluesound systems never have had these problems ? (now running on the same network.

About the WiFi - I have been IT and network manager for more than 25 years and I have tried several network systems and the problems never disappeared for the Atom - and the Bluesound never had the problems.

So if your system runs ok - would you tell me what firmware version are you on ? -

Ergo I can’t tell you about Atom screen freezes other than to say that Naim are working on it.

In my case I had a lot of problems with the app and the discovery protocol until I changed my WAP and bypassed the ISP supplied router (even its switch) for all communications involving DLNA discovery and service packets.

The protocols you are talking about is media access protocols from the Atom to media servers (Sonos does not need specialized router anymore) but at this stage I am not using media servers to the Atom - just trying to make the Atom itself work with the app and the remote.I

The connection between the Naim app and the Atom also use DLNA/UPnP, and not just the media stream transport traffic!

If the network traffic from the control point (Android or iOS) is running via WiFi (as typically it will unless an Android emulator is being used or an iOS device is being used hard wired), then the WAP and any router / switches etc. between that and the Uniti have the possibility of filtering / delaying / blocking the UPnP discovery and device status messages (both ways) so causing serious and possibly intermittent problems for the control point app as it tries to discover / rediscover / talk to the Uniti.