Well, I thought I had this one pretty much sorted for me with the ProAc Tabs 10 Signatures…

I’ve had more small to mid size standmounts than I care to remember, but the last time I was at a point to choose from a few small mini monitors, it was between the ProAc T10Sigs, the Stirling V3, the Falcon LS3/5a and the Harbeth P3ESR 40th - and I liked them in that very order.

One thing, however, was that the Falcons I had back then were the Silver Badge (standard) crossover LS3/5a model. How would the upgraded/better Gold Badge Falcons compare remained an open question and a curiosity for me. I decided it’s time to do something about it when I had the opportunity with a Falcon Gold Badge Q7 version which, for all I know, is the same but only with a slightly deeper cabinet (9" instead of 7" approximately) providing in theory and as a design spec for a more optimised bass response.

All of the listening last time was done with a Nait 2 and a Supernait 3 + HCDR, so I did the same this time too, comparing the ProAcs T10s and the Falcons Q7 with each amp.

I won’t keep you long - I now have the Q7s. Whether it’s more the Gold Badge crossover or the slightly deeper cabinet, or both equally, I don’t know, but the Q7 sounded just as open, agile and coherent as the T10s but more vivid and convincing without at any point starting to loose tempo or speed, or start sounding like a “big” speaker, if that makes sense. Yes, the lower end was more pronounced but it’s more about overall presence and not just bass performance, and it’s the overall effect and realism that won me over, essentially immediately. The Falcons, Silver or Gold, have always had the mids absolutely golden, and both are slightly better than the ProAcs in this respect, so no surprises there.

I should note about the ProAcs though - somehow they retain a superb unique palpability with acoustic instruments, sometimes slightly lean but always totally believable. They also may be have a (very slightly) better soundstage too.

I also had a chance to compare each of the 2 Naim amps with each speaker. I would say that the SN3 plays better with the Q7 than it does with the T10s but regardless I preferred the Nait 2 in a smaller, about 4m x 4m room, and that’s how it will stay. While the SN3 has an edge with the Q7 in a larger room, I think no large room would do any LS3/5a type speaker justice (or is it vice versa), or at least they no longer sound so special in my view. Still, the SN3 and the Q7 are rather attractive in a slightly larger space too.

Now, the previous question of how the smaller “original” Gold Badge Falcons would compare remains still an open one for me … may be some other day:)

My current favorite, though I haven’t demo’d them at home, are the Rogers LS3/5a SE. Great on any amp I’ve run them on, including Naim. Hard to articulate what they do better than the others of the type, they’re simply articulate as hell and fun to listen to.

I love my Graham Chartwell LS3/5s and their LS3/5a speakers. Falcon gold badge are really good too. I tend to lean toward the Graham/Derek Hughes designed BBC speakers…they sound good.

Note on the Roger SE…it’s over a grand more US than the others.

Yes, articulation is the word for these speakers!

Hm, had an interesting audition with the Falcon Q7s and another amp, the Nytech CPA 402 …. very, very interesting!
For the first time in quite a while I am genuinely split and cannot make the usual relatively easy call in favour of my Nait 2 against another amp in the same room? These 2 amps are not too dissimilar in character (and size for that matter) but it’s just impressive how the Nytech delicately tames the Falcons where they sometimes tend to shriek a bit on poorer recordings, and then amazing how the extra bass available in Q7 somehow comes to more life - firmer, nicely measured grip, fuller (but not blown up at all), everything is engulfing and vivid. There is more energy but not in an overwhelming way such as sometimes with the bigger amps (e.g. the Supernait and alike) in the same not too large a space. The sound with the Nytech remains detailed and intimate, but rich, engulfing and very misically engaging! There might be a special synergy between the Falcons and the Nytech too.

On the other hand the ability of the Nait 2 to recreate space and at that often truly spooky groovy realism is just phenomenal!

I’ve read impressions from some here who have been very impressed with Nytech and smaller speakers, so I thought I’d try it being recommended by a friend too. I don’t think I would let the Nait 2 go (not even close) but I think I will indulge and have both amps reside and live together for some time, really happy I did this and very much looking forward to enjoying my new Falcons even more this way.

I spent a good hour reading up on Q7s after your first post, they look like a great buy, particularly if you do the final build yourself. Thanks for posting about them!

Have also looked into nytech before, might well keep their integrated on my short list (plus the SN3 of course!) if I ever replace my XS3. Thanks for posting about that too!!

And the XS3 is on my list for a while!

I’ve run my LS3/5As with Naim for 40 years. Added to the herd on several occasions but always go back to them.

I don’t think I would let the Nait 2 go (not even close) but I think I will indulge and have both amps reside and live together for some time, really happy I did this and very much looking forward to enjoying my new Falcons even more this way.

… I have today reconnected the Nait 2 after about 10 days with the Nytech only and … Wow, Wow is almost all I can whisper!

What a wonderful thing the Nait 2 is! I am sitting, listening, totally smitten with it, the Q7s are absolutely singing!

I have the supernait 3 and am strongly going into this direction.
I never felt like the ls3/5a cut deep enough so maybe the Q7 will be just right

I know Falcons are quite commonly paired and revered with valves (and I do like them very much at the end of a Nait 2 in a smaller room), however in my experience they do thrive on more and good quality clean power - it makes the Q7s definitely blossom to a fuller and accomplished sound (without any hint of ever getting lazy) in a slightly larger (well, by that I mean average) space. The more I live with them and listen in a couple of different setups, the more I realise how well they sound with the Supernait 3. I found e.g. the ProAc and Stirlings easily getting a bit lost in larger spaces but very rewarding with the Nait 2 for near field or a smaller listening room.
I keep discovering the Q7s, quite brilliant. Btw I don’t get why they are still cheaper than the Falcon ls3/5a (apart from the name?) but since I went for the Q7, I am not complaining!

I think you have to factor in the BBC licensing fee for the LS3/5a, which evidently is considerable.

Have you compared the Q7 lets say with other speakers with the supernait 3. I thought of going the harbeth route but after hearing all of them I wounder if they would leave me wanted something different. Don’t get me wrong the Harbeth sound good but when I heard the ls3/5a gold badge speakers their was def something special about the voicing. Very lifelike with the vocals.

Stirling makes some nice LS3/5a’s, not sure if they are bound to pay fee making things unnecessary more expensive.

I’ve got Falcon Gold Badge LS3/5as with my XS-2 and CD5i. They are the best speakers I’ve ever heard in my room. 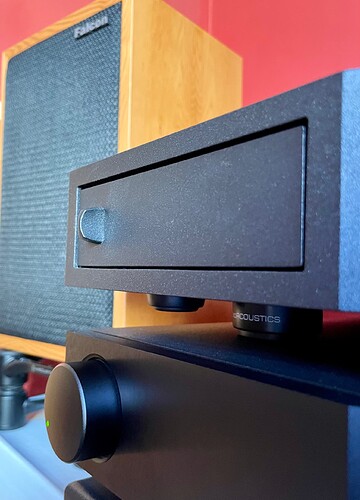 I’ve compared the Q7 directly to the ProAc T10 Sigs only, with the Nait 2 and SN3 as described. I’ve not listened to the Harbeth P3ESRs with a SN3 at the time but did try them with several others, up to 80-100wpc including monoblocks. The P3s did not get along too well with the Nait 2 for me and in fact with anything else I’ve tried they always felt like they need more power to start breathing easier, create space around instruments and get going - I think it may be just how they sound?
The Stirlings and the Falcons enjoy power but I’ve found them to get transparent, airy, musical and excited with almost any amp you throw at them. In a smaller room I preferred the Stirlings and the ProAcs with the Nait 2 - especially the ProAcs, which I thought were the easiest to drive.
The Q7 are the ones I am most enjoying with a SN3 so far, they fill a good average space with full confident sound and don’t thin out to go too lean or shrill like the others at a slightly higher volume or with some recordings.
It am pretty sure the Falcons ls3/5a gold badge would be quite special, especially in a smaller space where the Q7’s extra body and bass might even take something away from the near field type experience?

However Alan Shaw says they are easy to drive and on the Harbeth User Group I read (but can no longer find) the view they are the most difficult Harbeth speaker to drive.

I use a Nova +Powerline , if starting afresh , i would look at Arcam - something with more whoomph

I should say I had a Rega Aethos that drove the P3 ESR, I auditioned in quite a large room against a SN3, -and the Aethos won comfortably, now in a much smaller room I use a Nova and I am very, very happy with the results

However Alan Shaw says they are easy to drive

I would be surprised if he said the opposite…