Back in August 1976 I turned 18 and the guys I was working with said would I like to go to Knebworth on August 21 to see The Rolling Stones? So we set off 5 of us in Keith’s Ford Cortina Mk 1 at 09:00 and arrived in the car park at 10:15 and humped the beer/wine bucket to what seemed like a great spot.

The line up was:

The first 3 were fine but then I guess about 16:30 “Ladies and gentlemen, will you please welcome from Jacksonville, USA, LYNYRD SKYNRD”

I’d heard the name but that was all, but HELL the place immediately went into an intense toxic southern whiskey infested groove “Working for the MCA” “Searching” “Saturday Night Special” “Travelling Man” “Whiskey Rock n Roller” “Gimme Three Steps”. Everything about the groove, 3 guitar line up, the backing singers, lead singer Ronnie Van Zant barefoot because he “wanted to feel the stage burn”. During “Give me a T……” something, well unexpected happened, a young lady tapped me on the shoulder “Lindsay dance with me” Jenny who was in my year at school who was there with a group of girl friends amazing coincidence amongst 120,000 people. She always was devastatingly attractive. Skynyrd finished with their guitar opus Freebird. “Skynyrd caused a real buzz backstage,” said the late Knebworth Festival organizer Freddy Bannister. “We all wondered how anyone could follow them. An hour later, we all began to wonder if anyone would even try“! The rest of the day, well, 10CC were great I always loved them but perhaps not right for the occasion, and then the Stones actually due on stage at 21:00 but actually 23:30 because of “technical problems” (aka Keith was stoned!). The Stones were great but in truth blown away by those southern men from Jacksonville. But as the Stones opened with Satisfaction Jenny came over again with a bottle of wine, not her first of the day nor mine, and we danced for the 2+ hours and we had a quite incredible snog during Fool to Cry. It finished at 2:30, the concert not the snog!

I saw LS again at the Rainbow Theatre early in ‘77, with my then steady girlfriend, not being support they could do their full set and in a small venue better but not as spontaneous.

Coda: Aficionados of Skynyrd will be aware that disaster struck in October ‘77 when their plane crashed due to pilot error near Gillsburg Mississippi, the carnage was terrible singer Ronnie VZ and several others perished but perhaps saddest of all the most recent additions to the band guitarist Steve Gaines from Oklahoma and his sister Casie whose Dad “only let her join a rock band because her Brother was there to look after her”.

I have seen Jenny once since in 2003 at a school reunion and she is very happily married with a lovely family. I returned to Knebworth in Aug ‘86 with my late wonderful wife to see Queen for sadly Fred’s last ever live gig. Queen were on fire that night but couldn’t hold a candle to Skynyrd.

Look what I’m getting for Xmas! https://www.diversevinyl.com/product/lynyrd-skynyrd-live-at-knebworth-76/

Great memories, saw them myself in 77, definitely one of my top 5 concerts

That’s a truly wonderful memory of a day that still resonates with me. I too had never heard of LS before that day. My mate had passed out a while before (drink had been taken) and was snoring gently on the grass. I remember booting him to wake up and listen to this astonishing sound and getting just a grunt.

The crowd next to us were well away and freely sharing certain herbal substances and we just went crazy dancing to this wonderful Southern boogie.

I’ve got the Freddy Bannister recording of that set on CD and DVD. The sound quality is not great but hell, it’s the memories and emotions that it conjures up and that’s what music is all about. 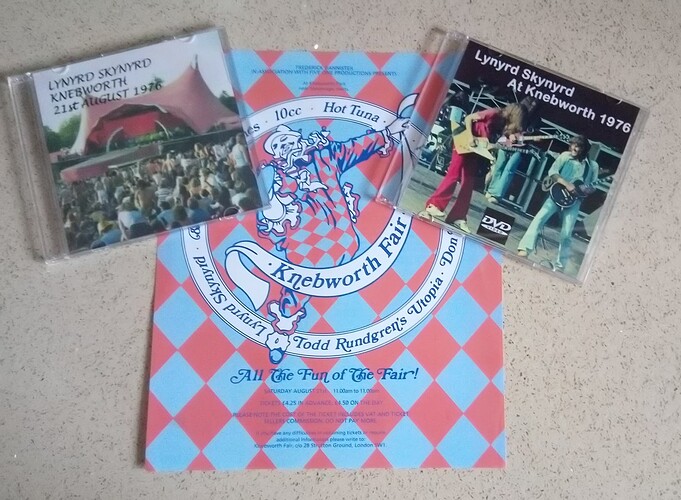 @LindsayM Lovely written account of the gig and life experience. I saw Lynyrd Skynyrd at the Glasgow Apollo 1975 and they blew me away. Took my son down for a Skynyrd gig to Hammersmith Odeon 1992, not quite the same but a great gig.

Guys - thanks for contributions, @glasnaim I could never quite get myself to go to the future incarnations, it just didn’t seem right, probably the wrong decision.

I understand, I had reservations about the 92’ gig/line up but it was a great concert. My son was 16 at the time and was becoming good on guitar plus he had grown up listening to all my 60’s/70’s rock, Skynyrd were one of his favourites, we enjoyed going to live music whenever possible.

What a wonderful post. It brought a tear to me eye and had me rushing over to the TT to load up “ Pronounced leh-nerd skin-nerd”

‘One More From the Road’ was one of my first self purchased albums a couple of years after its release. Still played and enjoyed to this day.

I was there too, I’d just finished my O levels and was having a whale of a time. I really enjoyed Hot Tuna, who played a fabulous early afternoon slot, IIRC. Great event.

I saw them in Feb 77, still at school and my first ever concert. Birmingham Odeon near the front. Very loud. Still have the Ticket and Programme. Great memories. Saw them twice in the 90s in later incarnations, still good concerts.

We had a shed load of Yanks at our school, due to the USN, so we were accessing lots of US music, Pronounced came out 74? Had all their albums, missed the two nights at the Apollo, in 77. Loved their OGWT gig. Finally saw them at the Hammy Odeon in 92? Tribute band? Not overly impressed. Passed Knebworth on the A1M almost daily, never got my lazy arse there either. Great story…

This thread has made me dig out my 1977 concert programme. It was a lot of pocket money in those days. 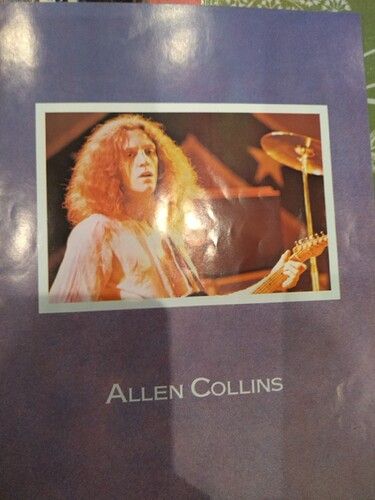 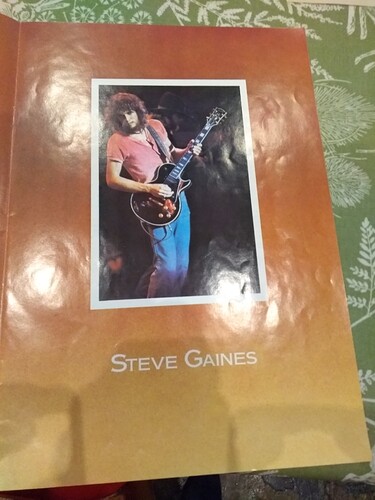 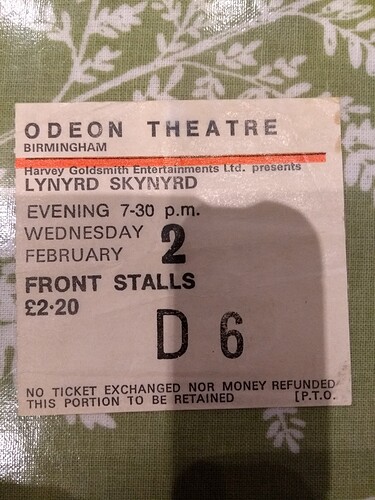 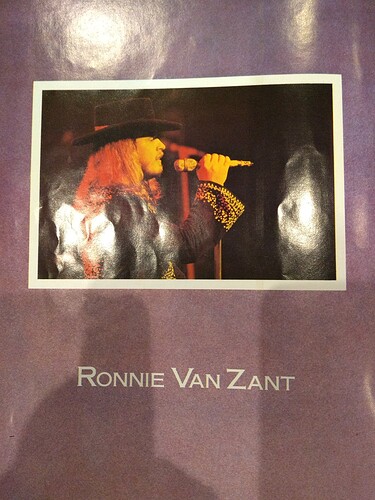 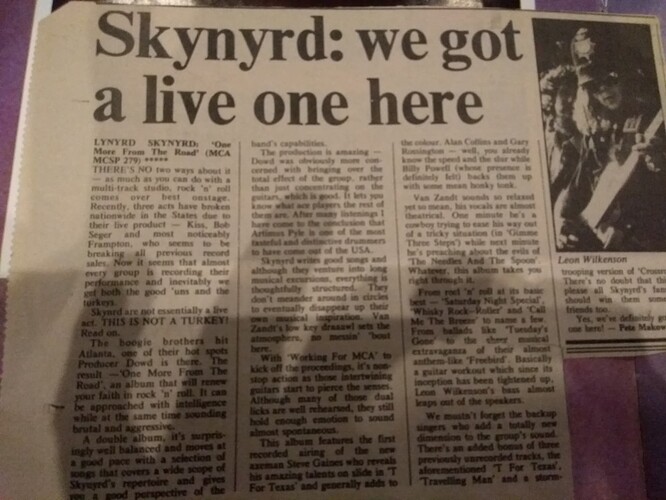 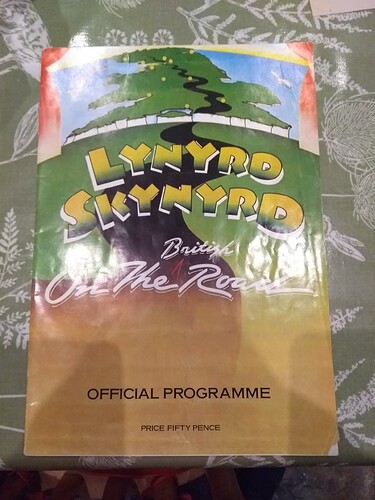 @Lachiedamn referenced the OGWT set. Here we are! 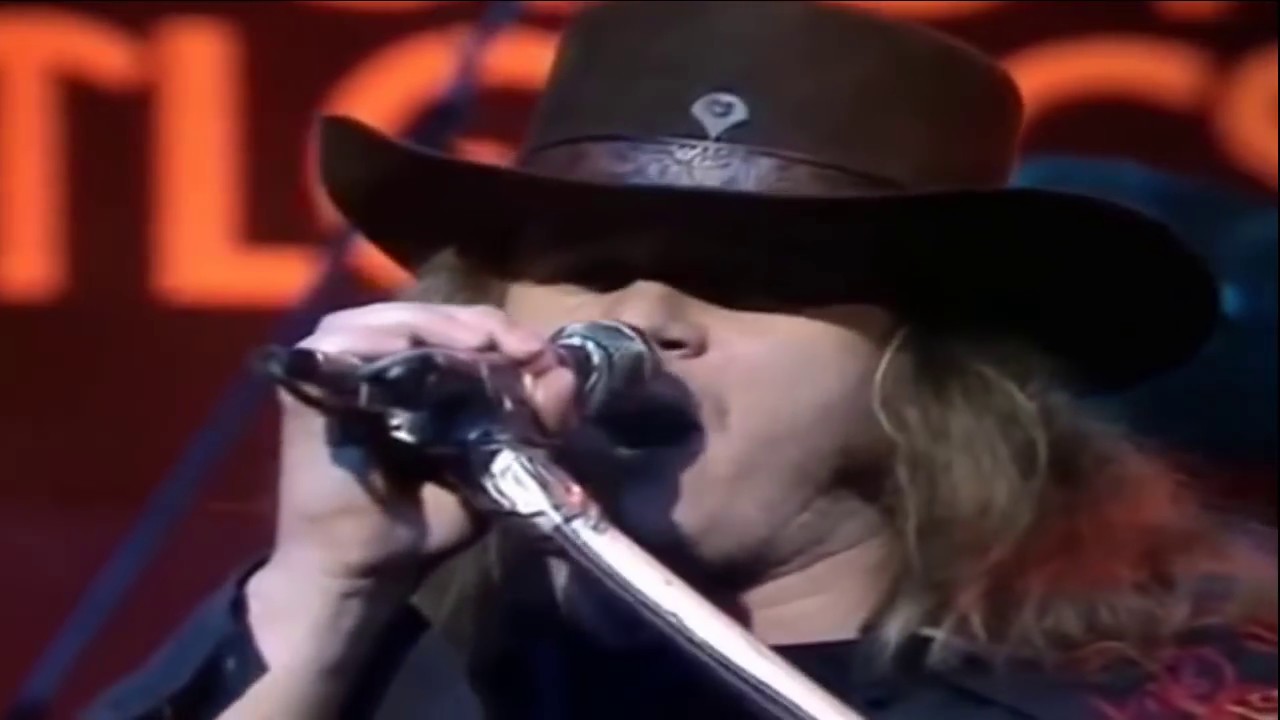 I would highly recommend the documentary if you haven’t seen it already " Lynyrd Skynyrd - If I Leave Here Tomorrow" covers the history, rare interviews etc

Wish I’d been old enough to catch them live back. There some great footage on YouTube.

Not a big fan now or at the time but saw them in Soldiers Field Chicago in July ‘77 supporting Ted Nugent!