Another question is regarding the washipaper beneeth the stylus. My has worn out, has a hole and is dirty. Some washipaper threads are hanging out and quite long and touching during the replay the record. The background noise is quite dusty on many record (my records are clean though) . The replay and dynamics seem to be alright, so the pick up is not broken.

Would be thankful for some thoughts.

Made some images here: 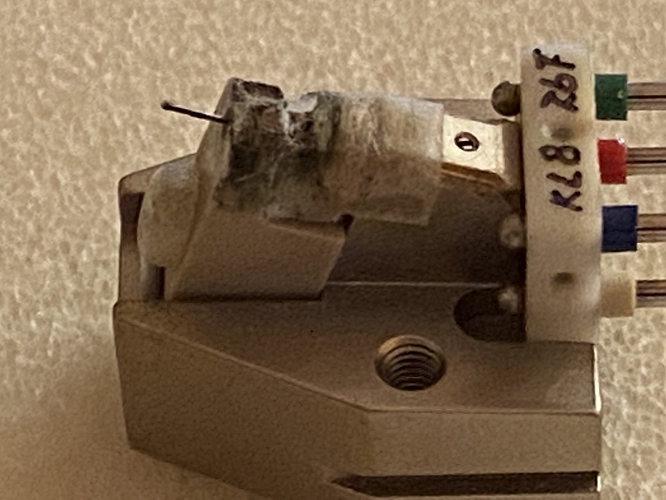 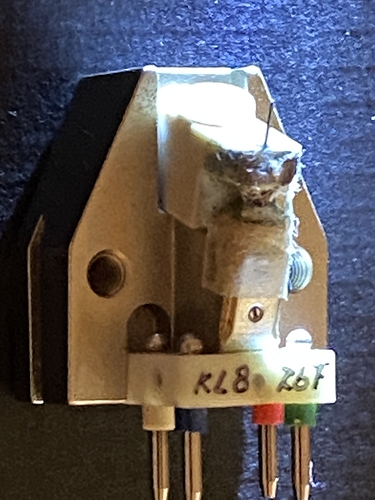 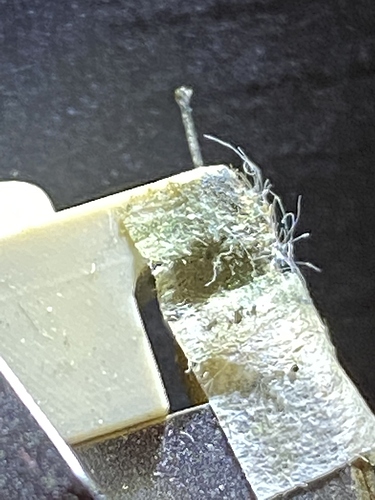 So pitty, no suggestions for the Superline loading anyone?
I found a thread with a Kleos SL, but not the normal version. Does the same apply for the last one ?

Could someone elaborate how the signature of the sound change,if going down with the values of the resistance R or up?

Roughly, too high a resistance and the bass if fast and light while the top gets a bit sharp, too low and the bass gets flabby and the top rolls off. A bit of capacitance can tame the top a bit. You can get to a few values you don’t have plugs for by combining them by using the cap socket for a second R plug, the resulting value is given by 1/R1+1/R2=1/R. this will only be approximate as the values quoted on the plugs take account of the internal 10kΩ input resistance, though you can use that formula to back calculate the actual resistor values.
I’ve never used a Lyra so can’t give you any advice on a best loading, I’d expect the SL version to need a bit less resistance than the standard cartridge.

I use a 750 ohm loading plug with my phono stage…Not sure if that would work with yours, as they do change based on the type of phono stage you are using. With my Kleos, a lower resistance is not ideal, however, this may also have to do with the phono cable you are using, and as such, Lyra does address this in their instructions that come with the cartridge.
As to your Wasi paper issue, I don’t think that is good, as the paper is utilized to reduce the gunk getting into the suspension and the motor.
I would let Lyra take a look at this cartridge, not only from the point of making sure it performs to spec, but also to see how much wear you have on the stylus…remember, a worn out stylus is going to ruin your records.

Thank you so much Yeti and Daveyf.

I will try then with the ones i have and combine those. If the Kleos SL needs a lower R resistence, then i would expect it go go above. I will try the 500 later today. if it gets better from the 453, then i will try to combine. Than you for the hint.

I got the Kleos as a very reasonable offer from a dealer, which used it as a demo and assured it was in perfect working order except of the wasi paper. I certainly would love to send it to Lyra, but its a long way to Japan and in those times it will take months? The stylus looked good under the microscope at least.

Thank you once more! I will try that and report. My superline will soongo for recap, so i can order a 560 R with it.

I would still be concerned about the amount of usage on the stylus. For the Wasi paper to have deteriorated as much as it has, tells me that this cartridge has many hundreds of hours on it. Luckily, you report that the cartridge still sounds good, which is a sign that the stylus is not completely worn out, but again I suspect it is considerably aged. Would be nice to know from your dealer how much usage he put on it and over how long a period. While I totally understand that sending the Kleos back to Japan is far from ideal in this climate, i still think that a turn around time of maybe a month or two could be expected, and you would have the peace of mind as to what that cartridge is going to do. Alternatively, I would look to your dealer for assistance; you may or may not have gotten a good price, but if it needs a rebuild in short order, maybe that needs to be discussed with him. Just IMHO.

For my Etna I’ve found 500R & 400C is the best balance, 333R is ok but any less makes the sound too bright and harsh
Bear in mind I don’t use a Superline anymore, I found the effects in changing the loadings on the Superline was far less noticeable compared to now
Also the tonearm cable has a massive influence on the phonostage loading as this cable is in fact part of the loading

Agree on the cable but not on the harshness from a low resistor value, not on a superline anyway, quite the opposite with the 3 cartridges I’ve used since running one but none of those has much above a 0.2mV output, 0.5mV is supposed to be just above the optimum level for a superline from comments I’ve read over the years.

Yes, but as I said the effect of the loading on the Superline is far less profound

Thank you Daveyf for your care. The dealer insist, that the pick up was in good conditions despite the paper. I am already investigating a reparation and how much this might cost. I got a bit tempted by the ofer . And Lyra raised the prices around 30% in the last month. Will need to think carefuly over,if i keep it an play until it goes off and then retipp.

Thank you Lyndon. I have the 500 R one, but just other values regaring the C. Have just the standart Superline pluggs, which came with the delivery of the box. Did you order your 400C at Naim?

Yes, the cable is mentioned in Lyras manual. Will need to ask Frank Schroeder, which Kabel is in my arm, since we exchanged it 3 years ago.

Yes, with a cart of 0.5mv you might be better off with the slightly lower gain “E” version of the Superline. The Lower output SL versions of the Lyras are ideal for the Standard Superline as well as the Prefix K, for which I believe they were originally designed.

Thank you Yeti and Richard. That would mean my Superline is not the right one for the normal version of the Kleos and I should order a Kleos SL instead ?

The SL version would be my choice with a standard Superline.

Thank you Richard. Then i will reconsider the whole deal with the current offer.

When I had the Superline I managed to get the cryo z plugs from the shop in Leicester from memory I think it was 576R & 400C, this was originally for the Kandid and was assured the same values would be ideal for the Etna as they’re both Lyras

By tonearm cable I was actually referring to the cable from the tonearm to the phonostage, the most important cable in my opinion

I understood that you should go for the E version.