I’ve just bought a used 2017 MacBook Pro Touch Bar (Thunderbolt 3) and want to connect it to and old 2013 model that has older Thunderbolt socket.

The older Mac no longer boots up it won’t get passed the screen with the Apple logo and status bar.

I’ve tried the usual methods but the don’t work it will not boot into safe mode and when I tried Recovery Mode Command R it didn’t work either I also tried Command+Option+R and whilst it did give me an option to connect to the internet through WiFi after about 20 mins of logging on an ! Inside a triangle appeared over the spinning earth globe and nothing further happened.

So I’m hoping to get into it by connecting it to my newer MacBook returning it to factory settings and configuring it to use solely for music or films.

Of course because it’s Apple this isn’t straight forward and requires an adapter so my questions are is what I’m hoping to do possible? Will I be able to control the older MacBook with the newer model and fix it?

Will I be able to control the older MacBook with the newer model and fix it?

I’m not sure you can without getting it to boot first. Then, I think connecting them only enables one to be used as a monitor, and even then, the newer models won’t allow a second mac to be used in monitor mode.

I have a 2017 iMac connected to a 2014 model, with the 2014 being a second screen. I can access both hard drives from either machine, but only the primary machine has acces to the operating system etc.

Will I be able to control the older MacBook with the newer model and fix it?

I too would be surprised if you can control it with out first getting it to boot.
My view is that this this probably a hardware fault but it worth resetting the PRAM if you havn’t done it already. instructions can be found at https://support.apple.com/en-us/HT204063

Yes have already reset PRAM.
None of the usual fixes found on line have helped.
Perhaps it needs an expert to look at it to see if it’s financially worth repairing I suppose it’s worth £4-500 on the used market so maybe worth fixing.

Hi I’m no expert, best get that out of the way

I had to do a similar thing recently to a friends Macbook air. In the end I couldn’t get it working as he had knackered the hard drive, but you can put a Mac operating system on a usb drive (I just used a 16gb ‘thumb drive’) & get it going from there, plenty of instruction/information on the web to tell you how it’s done.
Hope that helps; let us know

Agree also, put the OS onto a bootable usb stick. There are plenty of web pages on how to do that.

Thanks I’ll find an older OS system online as my new MacBook has Big Sur and apparently owners of older makes like my broken one 2013 have reported system failure with Big Sur.

I’m also going to need an adapter to go from the Thunderbolt 3 to USB 3.

Hello
I would remove the disk from the older MacBook and connect it with an adaptor, if you dont already own a universal USB hub, I suggest you consider one as they are very useful.
The disk in the 2013 is an AHCi,I upgraded one a few years back to an NVMe and made a good improvement. So remove the back, remove the battery connection and the disk should unplug, Google iFixit for info. So if you buy a carrier like this 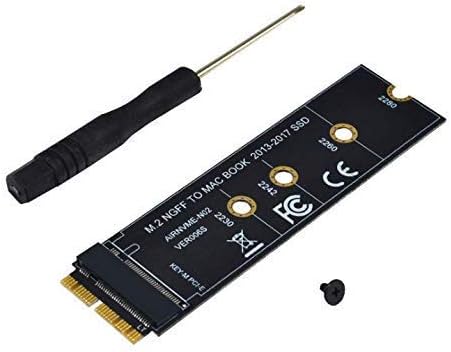 Hope this gives you a few ideas, Ive been Mac based 15+ years so know a trick or two.

Thanks NFG I’ve not around to trying to sort out the older Mac BUT will do so in the not too distant future I’m actually thinking of keeping it as a 2nd Mac optimised just for media.