I stumbled across something interesting that appears not to have been discussed on the forum, or at least the current forum.

Plenty of people seem to use other, sometimes more expensive, isolators/supports under their kit, so it seems a bit surprising to find no discussion of magnetic levitators: A search of the forum finds only mention of magnetically levitating turntable bearings, a suggestion (by me!) that magnetic levitation could have a use for gear support, and a reference to a deleted comment by @Bluesfan in which he apparently said he magnetically levitated cables (which I suspect was a joke).

These magnetic levitating isolating supports can be put under various items of kit, from sources to amps to speakers - and I guess even racks too, subject to weight.

Presented here for info, discussion, and invitation to post experiences.

I think these links are within forum rules -apologies if not.

I think it provides damping only. A vibrating magnet will pass that on to a magnetic field and therefore the other magnet. In other words the two are actually coupled, just not mechanically.

Yes, I think the mechanical effect will be similar to springs, presumably with resonant frequencies(?), but with a magnetic instead of metal wire path to carry vibrations. The question there is whether/how the damping may differ from metal springs.

I was wrong in my opening post - my links were unacceptable. The product I came across is called “Spike Sound Will* (odd name I know!), being sold in UK by an online retailer of components particularly for speaker building, called Hifi Collective. Their info page gets the name the wrong way round: Spike Will Sound! There was a review in The Stereo Times in August 2009.

Why would you want to have very strong magnetic fields in close proximity to sensitive equipment?

As for magnets near hifi components, any effect depends on the components and on any stray magnetic field from the devices (some turntables do use magnetic levitation bearings, while electric motors work by magnetism).

I am not arguing in favour of them as I haven’t heard, but the reviewer of the review I mentioned was impressed.

I’ve replaced the sold feet on my Gyro se with some magnetic feet. Along with a change out of the springs by an item that firm also make. Made a difference to the detail extracted in a positive way. The surface noise increased also until I fitted the magnetic feet. A significant improvement in my opinion.

Clearaudio magix, magnetic isolation, under a powerblock.
And many other brands do that, to go under electronics or even speakers. 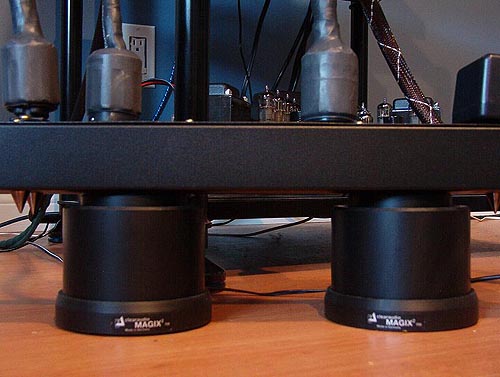 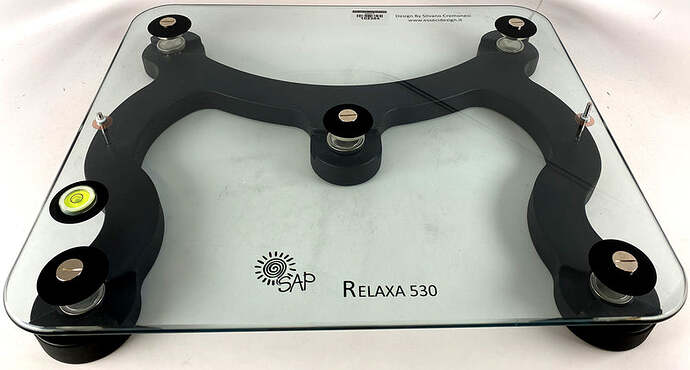 I have used the SAP Relaxa isolation products in the past under my turntable and tube phono stage they work very well they do a good job of eliminating small vibrations and micro harmonics so you get more detail and better focus. As for the magnetic fields from what I read before buying them the magnetic field are controlled by the casings the magnets are put into only letting the opposing magnets to interact with each other.

I’d have thought that magnetic levitation would be a really bad idea if there’s a tape recorder in the vicinity.

Not if its shielded, as discussed above…

It seems like possibly a good idea for isolating a rack from the floor combined with more traditional and electromagnetically inert spike and cups for the layers above. But it would have to support perhaps >100Kg and safety would be a major concern. How much lateral force would be sufficient to send something toppling?

My concern with any isolation method is how they stand up in regions prone to regular earthquake jolts. For example, Fraim in a city on the Pacific ring of fire seems like an accident waiting to happen. maglev, equally so.

These were developed by an English gent called John Jeffries who has had a presence in the UK hifi scene for many decades as an importer distributor and manufacturer. They were originally called AirPods ,John sold the design to Clearaudio who refined the design and called it Magix.
It was used primarily on John’s Stratosphere turntable back in the 1990’s .They seem to work well when adjusted correctly.

Nowadays, when I read reviews on high end systems, be it Stereophile, Absolute Sound or other, I never see a system with magnetic isolation. I wonder why. Most often I see HRS , SRA, or Stillpoints ceramic devices.
Do you know perhaps the reason ?

There are many ways to deal with vibration control and isolation ,each can have simple to exotic solutions and costing from affordable to selling body organs .I have the original Airpods model 1 and 2 both work fine after being in use for 25 years ,I have made many different shelves with combinations of hardwood ply, lead sheet ,mdf,hdf,hmwpe,glass and stone marble, granite cork.
Not all were sonically acceptable but the Airpods ( magix )do help to open up the sound and allow fine details to emerge. Mine survived the earthquakes in Christchurch NZ 2010 and 2011 unfortubately the rest of my hifi did not 90kilo loudspeakers 5 metres from where they were wrecked and a trashed turntable ,I still haven’t played any vinyl since then.