Hi, I’m doing some home renovations atm, I’ve have a mana wall bracket sitting in storage for a few years waiting for a lp12 which has finally happened about a month ago. Because of the limited space I have to deal with in our lounge I’m going to put my mana “macramé set” into our study room and run the Nac 5 under the floor into the lounge room. I’ve noticed the wall studs over here have a 650mm spacing where the mana wall bracket is about 490mm from memory …whatever it is its not going to space correctly for the fasteners. So I was thinking of mounting a solid slab of hardwood or MDF,HDF to the wall/studs then the wall bracket to the slab. Seems to be the only way to get the job done other than bringing more racks to the room which I do have in storage

they are destined for a future active system.
Question is what is the recommended mounting Installation of a mana wall bracket? Also should I put the cds2 or lp12 on the wall bracket? Any general consensus? Ive had the cds2 on a phase 10 mana table and it works great, well that was until lp12 aro prefix Armageddon arrived. I just would like to get the setup advice before I start rebuilding the Eiffel towers as it’s not something one wants to rebuild in a hurry.
Any opinions or qualified knowledge most welcome.
Regards

I think the first consideration is whether or not it’s a good idea to put a wall bracket on a stud wall at all, especially when used for a turntable. Some are worse than others, and the heavier timbers in some Victorian houses can be reasonably sturdy, but many are really flimsy.
If you can’t put it on a masonry wall, maybe a floor standing rack could be better, depending on the floor construction, and the orientation of the joists if it’s a suspended floor. It may even be worth removing a section of plaster and reinforcing the studs if you have to use them. The spacing of the fixings would then no longer be an issue.

If the walls are flimsy I don’t think the floors would be any better
What part of the world do you live in ?
You could always brace the opening between the wall studs with 2x12 to connect them together
Maybe in 3 or four locations and once done spray foam the cavity
That will stiffen it up and change it’s resonance as well.

Hi Chris and hififofum, thank you for your reply’s. I’m in New Zealand. The renovations are not in the Study room, so for me to start with stud modification is not an option. The wall I’m going to use is a load bearing wall. The floor is wooden suspended. I’ve found that the phases of mana work extremely well in my situation as far as the racks are concerned, I’ve never used a wall mount bracket before so I’m thinking because of the limitations my best bet would be to Use the table for my best play back source the lp12 and put the cds2 on the wall bracket with a slab of hardwood in between the bracket and studs then get some more sound frames or ref levels to go under the cds2. I wasn’t aware the wall should be brick or solid something. I guess it is what it is.
Thanks

It should be fine mounted to a studded wall

I have a phase 4 Mana shelf for my LP12. To attach this, I made a backing plate out of a couple of solid oak boards, stained to match my walnut cabinet. The Mana shelf is attached via four countersunk bolts and dome head screws. To reduce any possible twisting in the Mana’s metal uprights (it’s an old house, with uneven walls and floors) and to minimise the contact area, I put rubber washers between the Mana and the oak; when it’s all tightened up, these compress down to about 1mm, just enough to leave a gap.

Here’s a photo of my old Mana wall shelf, with the sizes. It’s about the best way to support an LP12, but in my attempt to simplify my system I decided I could get away with placing the deck on top of the Fraim. Not a good move in the end! New shelf on order…

You’ll notice that the 16th century builders of our old cottage handily placed oak beams at the right distance apart to mount the Mana. I imagine the turntables they had in those far-off days weren’t as good as my trusty Linn through, and I suspect they didn’t have moving-coil cartridges. 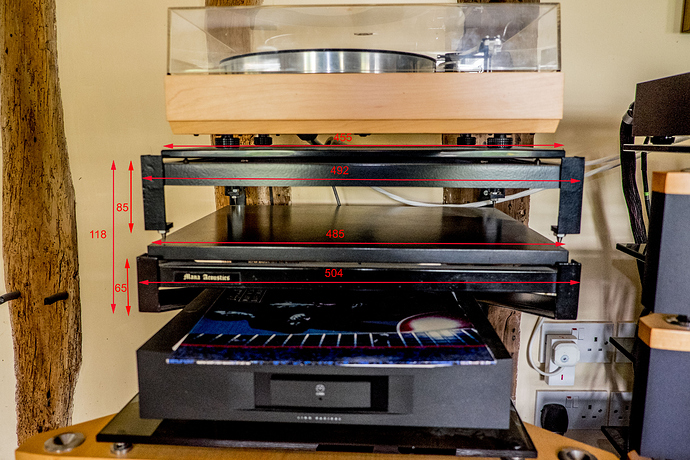 Some stud walls can be very flimsy, and entirely unsuited to supporting a turntable shelf, but if yours is a load bearing wall rather than just a partition it may well be fine. If not, you could always use it for the CD player which may be affected less than the LP12. Your idea of fixing a piece of timber to the studs, and fixing the wall shelf to that makes sense.
I like HiFiFoFum’s idea of filling the voids with expanding foam which would firm it up and reduce resonances, although a modern house may already have solid foam insulation between the studs, in which case you would only be filling in small voids around this.

Hi
Is it possible you could board the whole wall in quarter or half inch ply.
Then plasterboard over the ply
As it’s a supporting wall it would also make it stronger.
Regards
Mark