Manzarek and Krieger at Père Lachaise

Recoleta Cemetery, Buenos Aires, Argentina, is modeled after Pere Lachaise in every way. We visited in February 2020, just before covid. 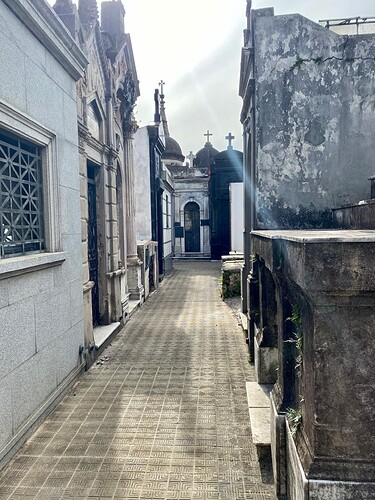 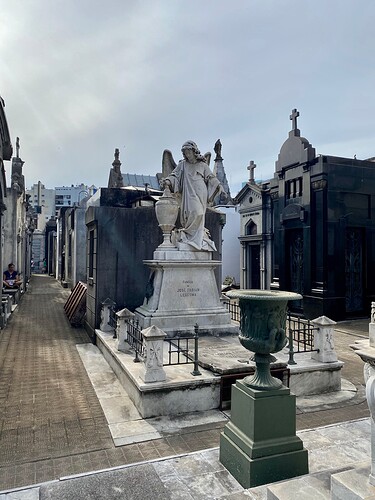 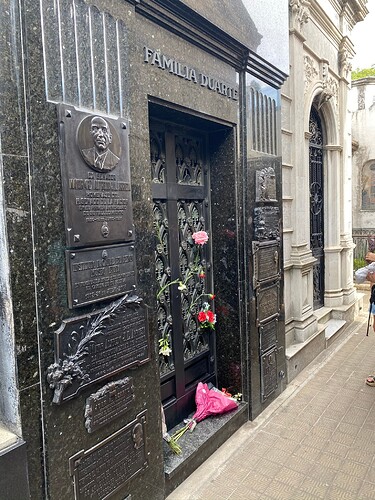 Perhaps I have different views than others but I still find it somewhat distasteful that people see a pilgrimage to a rock star’s place of rest to be anything other than lunacy.

By all means celebrate their lives and scream it from the rafters if you like, but I find death and burial/disposal a very personal thing which is devalued by token sentiment.

Ah yes, i knew it. Remember now. I wonder which of Jim or John has the largest number of fans, who go to the ceremony grave each year.

So, clearly being a bit clueless about this ‘cemetery’, what entitles one to be there?

Fame/wealth/‘nobility’/notoriety? Are these the only kinds of people important enough to be buried there?

Assuming no impediment (Oscar Wilde maybe~?) would it not be better for these people to be humbly laid to rest close to their families or region of birth?

Seems like an attempt to glorify themselves in perpetuum after death. 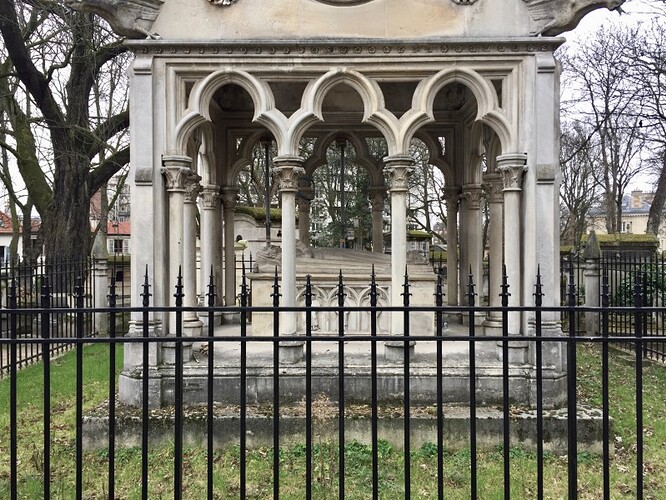 image800×600 189 KB
The most famous grave in Père Lachaise : Héloïse et Abelard. And they are the first there.

Abelard and Heloise loved each other. Their love affair, though, was so much more than just an act of carnal lust. It was also a relationship filled with charity and friendship. By delving into their love story, we may learn of a faraway world.

In 1115 Abelard met Heloise, who was living with her uncle, Fulbert at the Îls de Cité. At this point, she was likely in her early twenties, and Abelard decided to seduce her, offering her uncle to tutor her. At this point, she was known to be a brilliant scholar and well-versed in Latin, Greek and Hebrew. He, on the other hand, was 37 years old and in his prime as a teacher of philosophy and theology. Unfortunately, the affair ended in pregnancy and Abelard had her removed to his family home in Brittany, where she gave birth to a son, named Astrolabe. After having married her in secret, he sent Heloise to a convent at Argenteuil to protect her. Soon after, Fulbert organised a band of men, who broke into Abelard’s room, where he was castrated. As a consequence, Abelard decided to become a monk and persuaded Heloise to enter religious life. Their story, and what followed is known from his autobiographical writings, the Historia Calamitatum, seven letters between Abelard and Heloise, and four letters between Peter the Venerable and Heloise (three by Peter, one by Heloise). Also, we possess a collection of “lost love letters” which has been argued to be fragments of the illicit correspondence, which they engaged in during the winter of 1115 – 16.

If I go there it’s for the nice historical graves, sculptures, discovery of celebrities I didn’t knew…etc
Not to meditate before a rock star reminding.

I guess I still have some things to reconcile after my parents passed away, particularly having not buried/creamated my father yet after almost 30 months, and only 5 of us at my mother’s funeral almost 18 months after she died during the first wave. Complicating yet personal factors.

My sympathies, @Alley_Cat.
And empathy - I still have my Mum’s ashes since the middle of 2019, as family circumstances plus the travel restrictions meant we couldn’t yet carry out what she and we wanted to happen.

By all means celebrate their lives and scream it from the rafters if you like, but I find death and burial/disposal a very personal thing which is devalued by token sentiment.

If the living who made the decisions to be buried in such cemeteries with such ornate crypts felt the same way, they would not have made such decisions. Or their relatives.

Obviously many many of those entombed made those decisions prior to passing.

These cemeteries exist for the living to see.

Very likely not so James Douglas Morrison I will grant you.

I am sorry for your loss. I lost both my parents, in 2016 and 2019, respectively. I hope to return to their gravesite soon; no travel since Covid.

Sorry to read that.
My father died when I was 25. It was very difficult for me at that time. I often think of him, he is in my heart and spirit. But I never go at the cemetery. I don’t need to .

The Père Lachaise is supposed to be a resting place for Parisians, or people who died there, as in the case of Oscar Wilde.
I understand your feelings, but it really is an extraordinary place, not simply because of the number of famous people buried there, but because of the atmosphere, the statuary. The Rodenbach monument, for instance, is one of Georges Minne’s masterpieces (Georges Minne was a famous Belgian sculptor). It’s also a slice of French history.