Have any Melco users had any problems with the ex upgrade? I have. Minim server is not compatible with the Naim app. For example (this is using my N100 through my ND5XS2 connected via Ethernet cable) when I click on an album in the album view (in the Naim app) the next field shows a different title or maybe just one or two tracks and not the whole album. I have been lent a Hugo DAC and using my Melco through that using the Melco app or the Linn app or even the Lumin app all my music is as it should be. But not when using the Naim app. Whatever tree I use with Minim makes no difference it’s all wrong and mixed up viewed through the Naim app.
So, anyone else found this or is it just me?

I have 2 melco’s and one is a N100 running the new 4.01 ex software, i didnt have any problems and i would try going back to the naim app and reinstall it and see if that sorts it

Hi Dunc, I have installed the latest app update yesterday and still have these problems.

Melco are helping me to try and resolve the problems so I need to know if it is just me! I am using it stock as it were, l have not paid for a full Minim or Songkong licence.

Should get to the bottom of it then

N10 running the EX update no problems with Mininm via the Naim app but I do have the paid vesions of Minim and Songkong.

I have no experience of setting up a Melco, but Minimserver is very widely used with Naim streamers, so you should be able to get it working properly. There are no settings on a Naim streamer that control what it sees from the server, so your issue is likely to be a setting in the server that the streamer doesn’t like for some reason.
You might also have a look on the Minimserver forum. The developer usually responds there and is very helpful.

Yes it is just the same as on a QNAP for instance.
This from my N10: 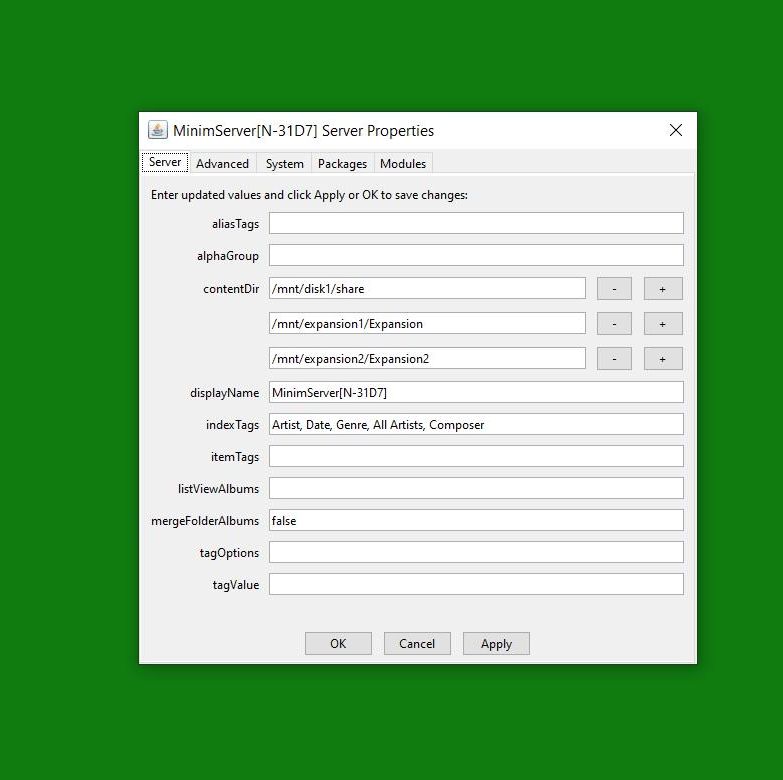 When I compared the two Music Servers, Twonky and Minim, as they were on my Melco a year ago I very quickly realized I greatly preferred the Twonky in terms of clean dynamics of presentation of micro-detail.
At the time I was surprised I was hearing much or any difference but less surprises me these days!
As I had a positive bias to wanting to use the Minim - and the considerable positive regard for it on the forum - I was quite surprised that in context of my system it was definitely not as good and gave a warmer more fuzzy presentation that seemed slightly compressed.

Do you use Roon? It has a similar sound to Twonky. I use Twonky for clasical and Minim for rock. But increasingly Roon as it is just so user friendly once the libarary is Songkonged.

I did have a Dealer demo of Roon a year or so ago and I could not get on at that time with the SQ which was worse than Twonky for me. Roon sounded more dry, hard and processed in the demo - we did play with a lot of its settings to find if I could get it to sing for me but as we gradually switched-out all the various features like transcoding rate-conversion it did begin to approach what Twonky was doing for me naturally and effortlessly. In the end of the demo we had Roon still not that good compared to Twonky - I was really unimpressed.

Given this seems to be not what others have achieved then I’m ready to believe that something was not right with my Demo, but at the time my Dealer did say the had not managed to get it to work in their top-end Statement system without reducing quality compared to either Minim or Twonky which they were using last time I asked.

So once I hear that it can offer me as good or better SQ then I’m interested. I’d like to like Roon, but it has not really gelled with me yet.

tried Roon last week, gave it 3 days then went back to audiovana, but did like the interface

I have had a browse on the minim server forums and for the most part don’t understand a word of it. It is all very much computer tech speak. I just want to be able to play my music without having to know about the tech behind it or have to endlessly fiddle with settings to get I to work and then have the next upgrade mess it all up!
I switched back to Twonky this afternoon and although some of the artwork on offer was interesting to say the least (a photo of mike jagger instead of the relevant Stones album cover for example) at least all my classical albums would play all the way through as if I was play a CD, which minim server won’t allow me to.
Back to minim now but my conclusion has to be that minim is not compatible with the Naim app as my mum collection is still chaotic with minim server.
I am not paying another subscription to listen to music, so ROON is out of the question.

I am a bit like you. Have some wrong cover albums and albums with no cover, using Naim app and Melco , connected by Ethernet to Nds.
But I don’t know and don’t want also to bother and learn how to sort out this metadata problems. I don’t want to use pc , only play Music.
A lot of members prefer the simplicity of Tidal and stream only Tidal for that reason.
My dealer doesn’t know himself how to modify the metadata from Melco, using Naim app.
So for now I leave it like that.

I demoed it with a Nucleus + and was not impressed also, one of my friends had a NUC built with an external powersupply that was much better. Being able to build my own and with the addition of a HDPLEX powersupply it sounsd rather good, it was quiet low cost, I had a Roon lifetime from the start, the £/$ was n’t too bad. I agree that the user interface is not to everyones taste and I somtimes miss file browsing so I just change about as the mood takes me, I have the choice of Roon, Minim, Asset, Twonky, Qnap streamer, Synology music DS, via mconnectHD, Melco Music HD, Roon or the Naim app from either the Melco, Qunap, Synology or a Sansung T3 SSD (yes each one in combinations sounds a little differnt). It will be iteresting to see what happen if Melco addopts Roon, as has been suggested it might this year. Roon is realy usefull when you want to multi room, as I have a mixture of Naim and Bluesound.

Use SongKong its is easy to set up and you can run it from a pc to you music storage (Melcos have it added in the EX upgrade) you can preview it before you addopt any changes.

Not so easy…I tried it once but didn’t succeed . Downloaded songkong but after couldn’t go further.
For now I don’t want to have headaches with that. Maybe will try on next holidays.

@frenchrooster It’s easy there is a very useful forum at jthink they are looking to provide it in French and German and are looking for translators. Your command of English is very good perhaps a job for you!