I’ve been playing a few records from MOFI, they all sound a bit muffled, perhaps muffled might be a bit over the top but I feel they are veiled in some way. My system otherwise on any other vinyl sounds fantastic, detailed, musical etc. I thought it might be me so I have one MOFI Ultra Disc CD, Bridge of Sighs - Robin Trower and this has the same traits. Sounds like it is coming from another room.

Anyone else had this issue? Or am I losing it

I find the MoFi’s have a strong bass but in my system that comes over as a super solid platform for the rest of the music to shine.
I have SRV’s Couldn’t Stand The Weather on One Step and it’s presence in the room is immense. Definitely not veiled.

If you refer to vinyl MOFI, they sound fantastic, specially the 45 rpm . Better vs the original. But expensive.
For MOFI cds, I have no experience.
Are you talking about vinyls or cds?

Thanks for the collective replies. I think I had better have another listen. Also wondering if I have something slightly out of whack, however everything else sounds really good. For example example I have a copy of Dixie Chicken by Little Feat on Mobile Fidelty on vinyl and also a standard copy on I think Warner Bros label and this seems to have a lot more dynamic range. Strange that I find the same with my only Mobile Fidelity CD as well with exactly the same traits.

It’s worth bearing mind that in more recent years MoFis LPs have been pressed on thick vinyl - up to 200g in some cases - and this will of course affect the VTA of your arm/cart. If your arm/cart is set up for regular 110-140g LPs then playing 200g LPs can sound a bit dull at the top end if your cart is sensitive to VTA.

It would also be a good to double check your cartridge wire connections - make sure they’re clean and correctly wired.

Thanks Richard, I will have a look. However, my Linn was setup by Peter Swain and does sound good. I’ve got a Rega P9 downstairs with an Ortofon cartridge so I’ll listen to the Mobile Fidelity albums on that and see if I get the same effect.
Tim

Had a bit of a fiddle around for an hour or so, have an LP12 with ITTOK LV2 and DV TK Rua. I found by increasing the tracking weight from 1.89 grams to 2.00 grams and using the HFS 75 set up LP I was able to tune it in a lot better with the lateral tracking bias and have improved the whole sound from bass thru mids and have a clearer high end.

Goodness, is there a MoFi CD transfer of ‘Forever Changes’?

I saw Arthur Lee (plus band) perform this masterpiece in a little club off Charing Cross Road (The Borderline Club perhaps) as a warm up gig before taking it to grander places, in the late 1990s. It was sublime.

I was there that night they named it the and more again gig I’ve still got the ticket somewhere .

So was I, I tried to see all of their gigs in the south of England, including a very bizarre one at Bisley rifle range near my home, Johnny Echols was also in the band that night. The performance area was a sprung floor ballroom with crystal chandeliers, about 30 of us in the audience! I consider myself privileged to have seen the resurrected Love, some of my most treasured musical memories.

I believe I’ve mentioned in the “what is an audiophile recording” thread the magnificent job MFSL did on its Capitol era Sinatra SACDs. I have a number of their Dylan, Band, and Miles releases as well, plus a few others (including the early CD version of Hot Rocks done using MFSLs mastering for vinyl). Quite pleased with them overall (although the stereo mix of Satisfaction is god awful).

There’s a SACD version on Mobile Fidelity of The Forever Changes Album, I never bought as I have a Naim CDS / CDPS player.

Thanks Martin, I think I may have this, not played I confess even though I now have an Oppo 205 universal disc player, must rectify that. I’ve collected many copies of FC over the years, I do have the MOFI 45 which as you say is sublime. My go to vinyl is the Rhino from a few years ago, it’s excellent IMHO.

I recalled reading somewhere about playing a record improving the sound. I have two MoFi LPs that rarely get played because the sound doesn’t seem as good as the original records.

I recently found the comment from the liner of MoFi Sheffield Steel (the text in bold), so I set up my old Rega 3 with a nearly new Ortofon 2m Red and just played each side about 10 times. I am aware that the stylus profile is not the same as my AT33 ptg II, but sure enough, when I listened, the sound seems brighter, clearer, more dynamic.
Yes, there might have been an expectation, no it wasn’t a blind test, but there is no going back to check it. 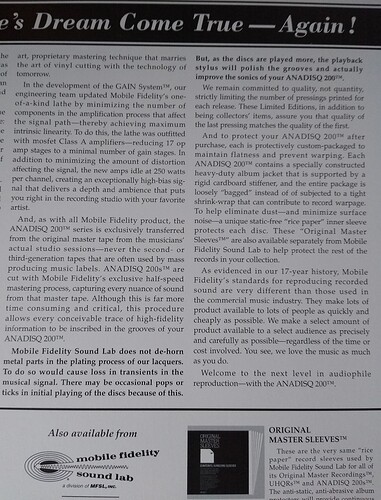