I’ve always been curious about the absence of MS on the forum and they don’t seem to get a mention much these days generally. I had a look at their website and it’s fairly poor, it seems they’re very lacking in the marketing Dept. I fondly remember the Pageants and I had a smaller bookshelf pair back in the 90’s which were great, ms10’s I think. Anyone using them on here or have any insight in to their lack of presence?

I remember the Carnival, Festival and Pageant from back in the day, but had forgotten about the much larger Signifer. It’s interesting how things have changed, with the speakers being much wider than deep, and with stands on ever so practical castors. They must have been good because Naim chose their 8” mid bass driver for the original SBL. 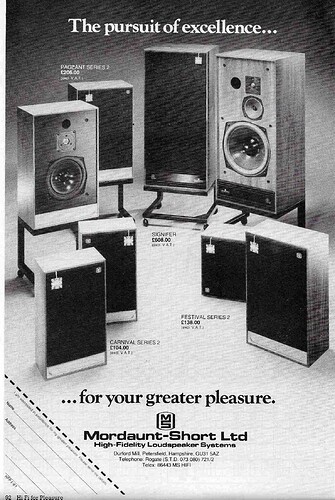 I ran MS310s until 3 or 4 years ago, before finally replacing them with Neat Motive SX3s. The MS310 was a well respected, if budget, speaker of the '90s.

I have no idea why MS aren’t as visible these days.

The Signifer was reputedly really rather good and even today I quite hanker after a pair to try. It also shares something with Naim - the “acoustic environment balance” control which is located on the lower front crossover panel uses a little plastic knob that’s shared with the Naim NAC12, NAC22 and NAC32.

And in the late '80s there was the interesting M-S 442, designed by Phil Ward. This could be considered the forerunner to the Naim NBL which further developed some of the ideas introduced by Phil in his 442 design.

Basically just a name these days.

Norman Mordaunt was already pretty active in the speaker field before setting up MS with designs such as the ‘Arundel’.

This, the beginning of a review of the Performance 6 speaker written in July 2015, is lifted from the Z Stereo site:

" Founded in Fulham in 1967, Mordaunt Short fast became a solidly middle class loudspeaker brand selling to people looking for strong performance in a conservatively styled package. The 1977 Pageant, for example, was a staple of suburban respectability, a sort of Volvo of hi-fi. But the brand went through a series of contortions, changes of ownership and market positioning. By the early nineteen nineties it was in the TGI group alongside Epos, Tannoy and Goodmans, and winning awards for its bargain budget boxes – which were unrecognisable from the designs it was selling a decade previous. Then in 1999, Audio Partnership took on the company and reshaped it for the modern world…

Launched in 2010, the Performance 6 is the company’s flagship and cost £3,500 when it first appeared. Designed by talented acoustician Graham Foy, the final pre-production version was reputedly tuned by Marantz’s Ken Ishiwata – at that time, the brand was distributed by Marantz outside the UK. There is still a pair in regular use in Ishiwata’s listening room at the Marantz headquarters in Eindhoven, Holland."

Then in 1999, Audio Partnership took on the company and reshaped it for the modern world…

It never ceases to amaze me how a company can make such a b****cks of a respected and established brand.

because these companies are usually run or owned by people who know nothing about the product area, and care less.

I picked up a pair of MS20is the late 90s version last year for a friend who waa building a new system. Out of curiosity I Put them on the end on my 252 250 sounded great for 50 quid.

I had the 10i pearls a long time ago which I thought were bright but I changed my mind- they needed the right amp. Even now I think would work well on the end of Naim gear. Fast sounding speakers

Fond memory of owning Pageants back in the late 70s with A&R A60s and Rega RP3. Castors we’re certainly easier than spikes!

Reckon that was a Hi-Fi Answers system

The 1977 Pageant, for example, was a staple of suburban respectability, a sort of Volvo of hi-fi.

Not sure I fitted that profile at the time, or even now😉

The reviewer’s words not mine but I know what you mean.

Unfortunately this happened for a lot of well respected British brands, such as Wharfedale and Quad, just to mention a few which have their current range mass-produced Far East.

Many customers seem to care more for for shiny new bling products with a well known brand name on.

I remember having a pair of MS 25Ti’s back when I was a student mid to late 80’s driven by my trusty P3 and a Rotel 820BX amp… my first ‘proper’ starter system.
Still got the P3…just

I had a pair of MS55 Ti’s in the mid-eighties, firing off a huge Denon amplifier. In the early 90s’ i was fortunate enough to work for Morduant-Short as a production assembler in Havant (Hampshire), under the then TGI Group. Under that same roof of the factory was also Epos and Goodmans Loudspeakers production lines. Those were interesing times, sadly long gone…

I have a good memories of Pageants; I ran them with a Nad and then a Nait before passing them onto my brother along with the Nait. His eldest daughter still uses that setup.