I was chatting with @billywindsock about our very interesting family histories and thought it might be a good idea for a thread.

So if you want to share yours with us please do.

Not exactly a story but on my mum’s side there were 4 children, over a spread of ~4 years. My (associated) grandad was on the merchant ships and, sadly, lost his life in WW2 (c.1943), the children pretty much timed with his longer periods of leave.

What’s amazing to me though, is how my late granny brought up 4 young kids on her own during WW2 and after, in what was a very modest house. She didn’t re-marry or have another partner. Very different times, where people tended to look after themselves e.g. the back garden was a productive veg-patch, with rhubarb also.

My dad was the youngest of nine children. They lived in a three bedroom house with no bathroom and no gas - grandad was a Spiritualist and wouldn’t have gas in the house. Of course, being the youngest it was Dad’s job to deal with the Earth closet. The eldest child was killed by a horse bus in Worthing but all the others lived to a ripe old age, 80s and 90s, and the really strange thing is that they all died in age order.

grandad was a Spiritualist and wouldn’t have gas in the house.

I bought my Wife for Christmas the Ancestry DNA testing Kit. She has found it fascinating and has worked on her family tree to great affect.

That’s the reason I was given by my Dad. I never met Grandad so couldn’t check the veracity.

My old man was a dustman and yes he wore a stereotypical dustmans hat.

The rest of my family are/were equally unremarkable but didn’t have songs made up about them.

My dad was a milkman and had a song too. He wasn’t called Ernie, though my uncle Ernie was, and he drove lorries.

Mine were all convicts.

Ha , not sure if you are being serious. 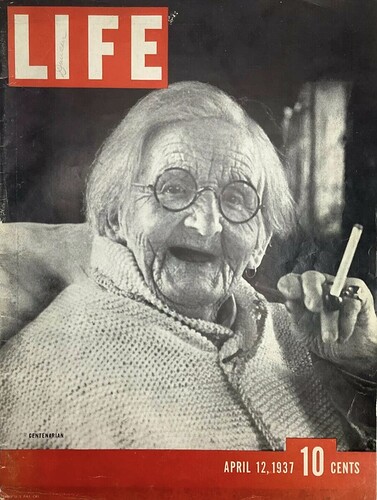 This is my great great grandmother - 1837 - 1939. Celebrated smoker! I still have the little pipe she’s holding with the cigarette ‘a la chimney’.

When she turned 100 she ‘…received a telegram from the Queen and well-wishers sent 100’s packets of cigarettes’ a newspaper article recorded.

I often reflect on what it would be like, now that one has the maturity of ‘life’ and adulthood, to have spoken to one’s parental chain, not in comparing to the present, but more to learn of their attitudes & approach to their lives - needless to say, their sacrifices as a collective at times of war are well-recorded.

Perhaps Messrs. Bezos & Branson could club together and build a TARDIS

Perhaps Messrs. Bezos & Branson could club together and build a TARDIS

I left it too late to figure out my family’s history. Always had a sense certain things were simply not discussed/avoided. Father was the youngest of four, all my paternal cousins were 20 years+ older than me, and they were called Auntie/Uncle when I was young. Never knew paternal grandparemts who died before I was born. Father never talked about them.

My maternal grandfather was a hospital porter, stern chapel deacon, smoker and enjoyed his beer with my father probably away from chapel gaze. He died far too young when I was 10-11. Maternal grandmother lived to 100 years, great cook, once was matron/ran kitchens in a workhouse in Daventry. She could have taught me a lot of family history but strange in your youth/teens how such things are of little interest, then of course it’s too late when you actually are.

On my fathers side, everyone was military (I can trace four generations back) until my generation of which no-one bothered. Dad was involved in developing the guidance system for the Blue Steel Missile in Australia, (that’s all he was prepared/allowed to say) and I was born over there near Adelaide.

Mrs G’s side are all doctors, lawyers and civil servants for many generations, with Mrs. G following in their footsteps as a doctor. (hospital consultant, Acute medicine).

I have often pondered tracing my ancestry, but have floundered on a basic issue. Do I trace back along the paternal or maternal lines?
On my father’s side there is a line of clergy from North Wales, on my mother’s line, albeit sidelines, there a few interesting characters, mainly doctors involved in public health, the navy or exploration.

I researched my family history going back through both the paternal and maternal lines. I think this is what most family historians do - after all, both lines have equal importance to your family history.

Medicine ,the law and civil service on both sides of the family and ( if I dare mention it ) colonial administration !
Regards

My family history consists mostly of agricultural labourers moving from the Lancashire countryside to the cotton mills of Bolton in the 1840s / 1850s. I seem to have deep roots in Lancashire, with just a few individuals who arrived in Lancashire from outside the county.

I’ve traced most of my lines back to the mid-18th century, but haven’t done much research for the last 15 years or so. Now that I’ve recently retired, I’m hoping to pick this up again in the near future.

I’ve discussed my Grandmother’s Romany roots so won’t go into that again here but she married a man 20 years her senior at the end of World War 2.

He had joined the Army in the early 30’s found himself on the beach at Dunkirk and served in North Africa and was at Monte Cassino we found all this out after his death when one of my Uncles (who is now an ex Labour Councilor Mayor) accessed his war records.

My Irish Grandfather and his sister where orphaned in a TB epidemic and both ended up in England. My Grandad laid bricks and met my Irish Nan in Lambeth where she was in ‘service’.