Since the last update I am finding the app quite annoying. I used to have artists listed alphabetically as a default setting.

Now when I go in I get a short list of the last artists I added. Then, I have to click on “more” to get the full list which switches back to a date added order every time I reopen the app. See photos showing this.

Does anyone know can I change the shortlist of artists, and then how can I make the full list alphabetical as a default?

Apologies in advance if I’m missing something obvious…

Swipe the page down, and some options appear near the top of the page. One of them is the sort order for the list you are viewing.

Swipe the page down, and some options appear near the top of the page

Is this an iOS-only feature? Swiping the page down does nothing for me on Android, except that it seems to refresh.

Edit: I mean swiping down alone. I do need to swipe down to touch More, and only then may I see the search menu

Not sure if Android is the same, I haven’t used it for a while. On iOS it’s one of the buttons to the R of the search box.

I know others have been confused by the hidden button that changes this setting, and feel that the default order is the one they wouldn’t normally use, so hopefully they’ll improve this at some point. 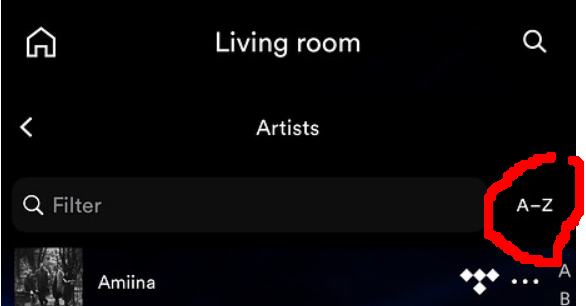 I have that too in Android of course, but only after I scroll down and touch More. It has always been like this for me on Android as long as I have used the app (since August or so, also the previous two versions). I understood that rich’s complaint is that it is like this for him now, too

I am missing the actual alphabet on the right side, even though it’s in alphabetical order.

Lastly, I have the same issue on iOS 14.2, when you quit the app, my list of the artists goes back mixed order and I have to click on More then on A-Z, then Sort by… title.

Also I have issues with the app, whenever it’s open or it’s been running for a while, it freezes. Whether I press play, it doesn’t react, neither change the music or showing the music actually playing. It shows the music that was on before I quit the app. The only solution is to force close and open it again. Has anybody experienced the same issue?

Missing the alphabet on iOS or on Android? There is no alphabet in Android as it is a feature built into iOS. But on Android you can still touch and hold the little scroll handle (though it is a bit difficult to grab it) and then scroll by dragging. You just don’t have the letters for orientation

As for the freezing, I don’t have what you describe but it tends to be unresponsive for a few seconds after waking up the screen. Was worse with a Nova than it is now with NDX2. Search for my username and “unresponsive” to get details of how it behaves for me

That’s right. I used to be able to sort alphabetically and it stuck. It always switches back to date added now, so annoying!

This part I understood, my question was regarding the alphabetical list on the right.

I have iOS and as you can see in my screenshot, alphabetical order is missing for me. Also I have a Uniti Nova, but after waiting for a few seconds, it might be 10 in the worst case, everything refreshes on the screen and the app comes alive.

Out of curiosity, what’s the first difference you’ve noticed with the NDX2 compared to Nova? What’s your current set up? I’ve seen many equipments in your profile. I love my system with the Arias. I think it’s a decent first system. Thanks for your time.

It is strange that the alphabet is missing for you in the app on iOS. As mentioned, the alphabet does not exist in the app on Android, and when I asked why I was told that this feature is provided by the iOS operating system and Android does not have such a feature. Therefore, the Naim app only has it on iOS. I am not an iOS user, but if the feature comes from the operating system I wonder if you turned it off in some iOS setting maybe? Do you see the alphabet in the scrolling lists of other apps or is it messing everywhere?

Yes, I had the same app behavior on the Nova, it takes a few seconds to wake up (or also when switching from a different app to the Naim app), sometimes 10 seconds but not always that long. After this, it is fine. However, quickly changing the volume or pausing the player is difficult if the tablet was sleeping (e.g. when phone rings). It was even worse for me on an older app version. I contacted Naim support and they looked if something was wrong in my network, but there wasn’t. The app responsiveness did not get better than this even after talking to support. (I used the BluOS app, which is very similar, in the same network without such delays.
The unresponsiveness is better with the NDX2, but not completely gone. I am now about to switch to Roon anyway.

The equipment in the profile is up to date, and except the speakers everything was purchased this year. I am exhausted

The 252/SC/NDX2/555PS were just added two weeks ago. I have not had the chance for long attentive listening yet in this new configuration. And so many things changed (before the 252/NDX2 was the Nova for a few months, but before the Nova it was different again) and I have to admit I cannot say anymore. When I switched from the Nova to the new things it was a lot of work that included rebuilding the rack and lots of cable dressing, after this it was very late at night and I was exhausted and sweating. Sure there were differences immediately, but I can’t put them into words. I need to let the new system settle down without further changes (thankfully all is done now) and listen to music for change. And in a few weeks I will have forgotten all about the Nova

In particular impressed with the P8 (on its rather fancy shelve) & Aria . The one time I really had some time to listen, I compared the new release of Getz/Gilberto in the Qobuz hir-res streaming version versus the audiophile pressing (recently released by Verve Records) and while both sounded fabulous I preferred the vinyl source.

Thanks for your detailed and informative response. Happy listening and enjoy your system

About the app, I just realized that the whole unresponsiveness is much better on my Motorola G8 Power phone than the Samsung tablet I usually use. Both are Android 10 and rather new, the Moto is the model from this spring, the Samsung is from 2019. On the Moto it is still slightly present but not really problematic