I picked up a new Atom yesterday after trialling one at home. I hadn’t noticed this on the trial unit, but there seems to be an after image on the screen, ie like a watermark of the previous thing that was playing. In the attached example you can see a washed out BBC Radio 6 logo behind the volume display.

Any ideas how I can fix this? The screen does go completely black when the display is off. 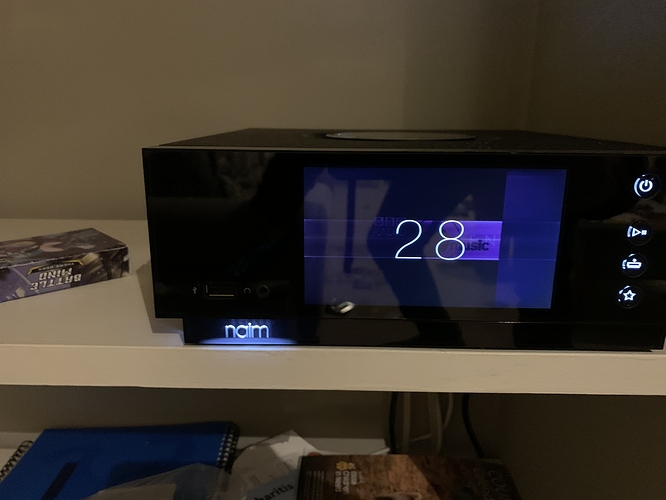 That looks a bit odd, I’ve never noticed it on mine. I would give Naim or your dealer a call.

Power it down from the mains plug, switch back on. But still call dealer and Naim to log the concern.

Thanks. Do I have to leave it off for a certain length of time? First attempt hasn’t helped - if anything there is more noise. 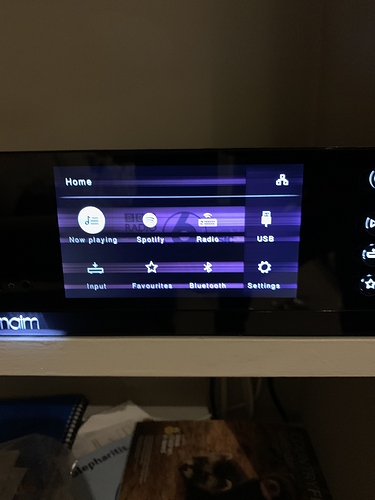 Having experienced display issues and considering the comments around, I’d demand a replacement unit under warranty

Thanks. Have emailed Naim.

No a few minutes…if its still a problem, call to dealer and replace.

Seems knackered. Sounds good though. I’ll wait for the official line from Naim then I’m sure the dealer will swap it.

Mine had a complete meltdown not long after I bought it, with lines across the screen a bit like yours. After a restart, it recovered, and has been fine ever since. 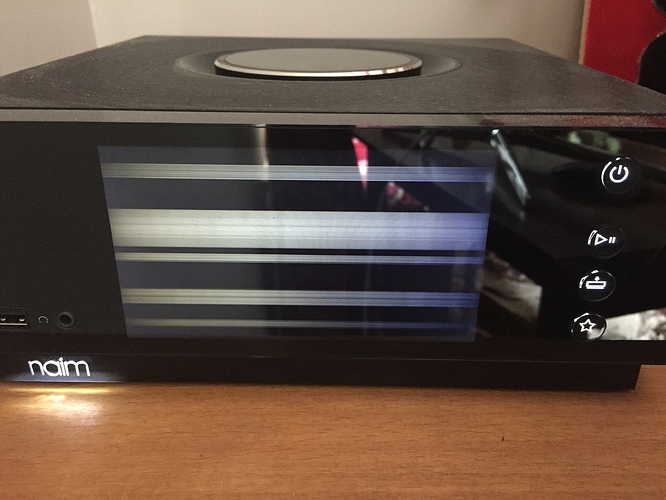 Did you leave it off for an extended period? I tried about 5 mins with no benefit. Will see if leaving it switched off at the mains overnight. helps.

I just turned it off and pulled the mains lead for a few minutes.

I’ve had also an Atom with exactly the same display issues … my dealer replaced the unit.

Power down at the mains switch, remove the power cable from the back, leave for several hours and reconnect at hthe back before enabling at the mains socket.

I returned an early Atom for a very similarr eason, upgraded to the newly available Nova 2 years ago and had a similar issue after changing to a Powerline a few months ago.

I was going to get it repaired by Naim but unplugged it testing other components, and many hours or even days later it was fine.

Thanks. I’ll give that a try. Not keen on it becoming a recurring problem though…

I would let your dealer know anyway. Then if it recovers and you decide to keep it, I’m sure they would replace it later if the issue recurs.

Suspect these screens are bought in, perhaps I am being cynical but I do notice that when parts are clearly bought in then the failure rate seems higher .

You should do this through your dealer. It will be far more effective than asking direct. Just say you’d like a new one. I once bought a 555PS and its front panel was wonky. I wasn’t happy, my dealer spoke to Naim and a replacement arrived the next day.

These screen issues for Naim must be a real headache and whether you are using the old OLED on the older streamers or new tech they just dont go away.

Your Atom needs to go back to the dealer.

If course they are bought in, no HiFi manufacturer is going to manufacture their own screens, any more than they are going to build capacitors, or many other components that go into their boxes.

The NDX 2 had gone back by the time I tried the Powerline and in hindsight I’d have liked to have heard the NDX 2 with the Powerline vs Nova/Powerline. I bought the store’s Powerline and have a second on demo - sadly lack of time, fiddly equipment access, pressing family matters and a multitude of permutations are confusing me. Interestingly, the Powerline brings an uplift on my Linn Linto phono pre-amp which may justify one alone! It also does something to the LP12 Lingo PSU. Not convinced…

The problem has not reappeared - I was absolutely convinced it was a hardware fault but I can’t see how unpowering for several hours (possibly longer) would cure a hardware fault, so now more inclined to think it’s a spurious software issue.

I think it may have happened when I tried a new Powerline on the Nova - very stiff plug that probably wasn’t inserted properly coupled with me not turning the wall socket switch off, so the Nova potentially got a burst of intermittent power for a few seconds - maybe some component didn’t start up properly?

If you’ve powered it down plug the Powerline lite socket into the Nova before plugging the other end into the wall socket/power strip and if there’s a switch on the wall socket turn that off first then flick it when all connected.

The Nova’s socket is wobbly to decouple it so make sure the mains lead plug is in firmly as it can make contact without being fully in.

As others have mentioned, definitely mention it to your dealer and maybe even e-mail Naim support to document it.

If an extended power down fixes it, then if you decide to keep it, you’ll at least have it on record if the issue recurs.

If brand new however you might just want to take it to the dealer and get it exchanged.

Nothing I did fixed the Atom display which was why I took it back and exchanged it (for the Nova actually which was not available when I got the Atom).