When will a NAIM App for desktop computers be available?

There are no plans AFAIK

I don’t know if there is a desktop version in development.
If not, you maybe could that in those thread:

But there is already a little unofficial possibility for controlling your device via a desktop:
Open a Browser and type in your IP address and then /webclient/
For example: http://192.168.1.100/webclient/

For the brand new M1 Macs it should be possible to use the iOS app on the desktop as well.

Tha latest Macs can run iOS apps on their OS, so it’s possible depending on what Mac you have.

As a Mac user the new M1 Macbooks now solve it as you can install the iOS apps on Macbook. Works great

I have MacBook Pro 16 with Intel

I have MacBook Pro 16 with Intel

Okay. Sorry to say, but the iOS Apps only work on the new Apple self developed and built processors like the “M1” - so called Apple Silicon. Unfortunately the iOS Apps do not work on any Intel Macs.

I have an Atom on my office desk on which sits also an iMac. When I don’t have my phone or iPad to hand I run Linn Kazoo on the iMac to control the Atom.

To make this work I have BubbleUPnP Server running on a NAS and use it to make the Atom open home compliant. It certainly works well enough for me.

For PC you want NOX, which emulates android. NOX is good because you a can pass through the network so it sees your LAN. Works perfect for naim gear.

There are some alternatives, including the webclient mentioned above, although this is a bit clunky and was never intended for public release.
An Android emulator would do it, or there’s Roon.

But there is already a little unofficial possibility for controlling your device via a desktop:
Open a Browser and type in your IP address and then /webclient/
For example: http://192.168.1.100/webclient/

Quite interesting, I didn’t know that (it works in Windows)!

Not work on Mac

Maybe a silly question but you did put the IP address of your streamer in the browser address bar rather than the one in the link?

Yes, use the IP of the streamer, which is found via the app. 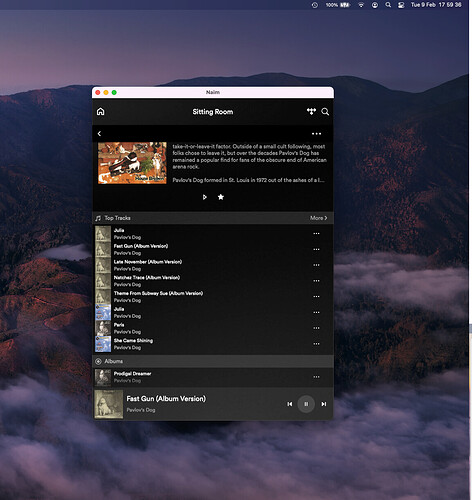