It’s un-tinted cherry. I have the same. It darkens slightly over time but still remains a lightish colour. Apparently it is no longer available as all the new cherry Fraim is tinted.

Interesting, so Naim have gone back to a tinted cherry…

When I bought three levels from TomTom Audio a couple of years ago to match my existing un-tinted cherry James said that they were the last of the un-tinted so I assume that all the new stuff is now tinted, unless some one knows otherwise.

I’m confused now my pic above is what I think is the original American cherry dating back 18 or so years as it’s the same shade as the SL2, Allaes etc is there two further variations of cherry?

dating back 18 or so years

After 18 years, cherry wood will have fully darkened due to UV exposure. If there was some tint in the finish originally, the darkening of the wood itself will have taken over.

(Virgin cherry wood is almost as light as maple. It darkens rather rapidly. When we bought a prior home, it was brand new and the builder had just installed the kitchen cabinets. We specified cherry. I went over to look, moved aside the protective plastic, and called the builder because they’d installed maple or birch by mistake. MY mistake.) 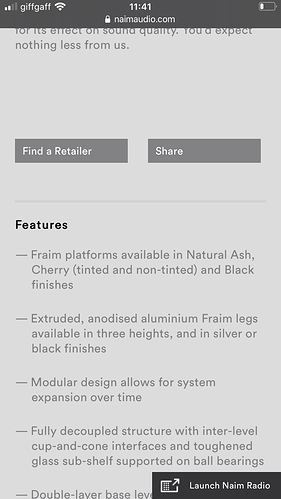 I’ve just returned from my local Naim dealer and ordered a cherry level in the original shade of cherry as they are still available as a special order. 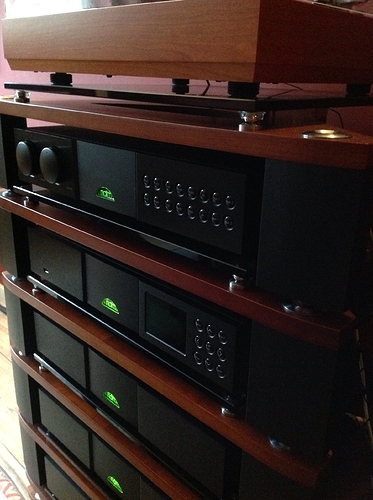 The pic. above it’s definetely Non Tinted Cherry. I recently ordered 2 new bases e 1 extended level. Unfortunately my dealer, or the distributor did not specify this so received the tinted version and we had to send them back.
Btw on last gen. package is specified Tinted or not version. 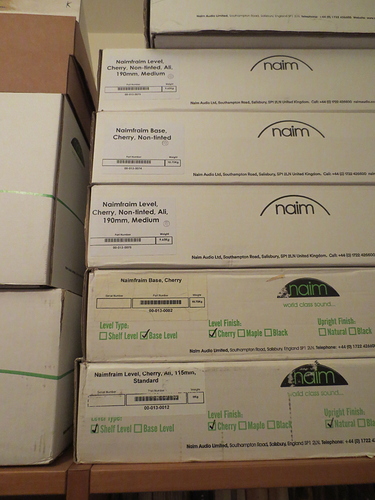 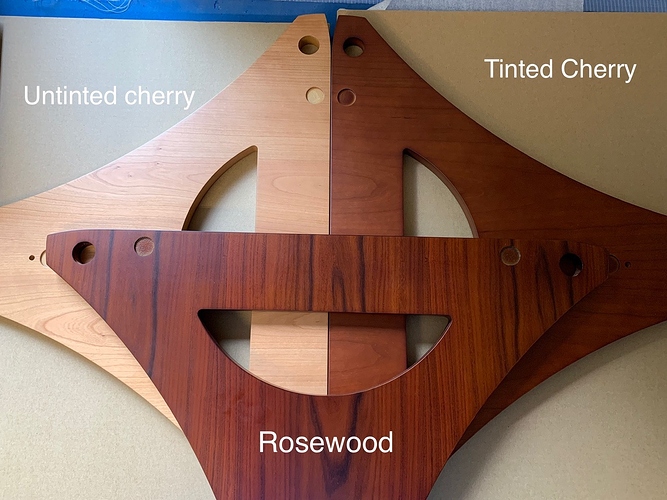 Went through this very matter recently with a customer’s order and Naim sent me this photo to assist. The tinted/non-tinted cherry option only applies to Fraim though.
ALL FraimLite wood is Tinted Cherry I am advised.

So, to answer the OP’s question, to my eyes the photo shows non-tinted cherry.

Many years ago I made a set of drawers in cherry - and it has not darkened (at all, I think).

UV-blocking finish? Or maybe a different species of cherry?

The finish was French polish. The cherry was normal cherry of the sort that you eat.

May have been a different species.

Tony, thanks for the picture. Very helpful.

Of course, just to make it all a little more confusing, there’s also the original Cherry fraim, which was I guess similar to the current tinted cherry (albeit, perhaps a touch more orange) and then the later lighter tint (much less orange) which is somewhere between the current untainted and tinted, but perhaps a bit closer to the current untinted…

Glad it has helped.

Is that a bit like a certain US president’s spray tan “orange”???

If I am not mistaken, the darker tinted cherry finish on both Fraim & FraimLite ties in with the introduction of the Ovator cabinet finishes as this is also when Naim moved from Maple to Ash finishes too. Different woodwork supplier, I seem to recall being advised.

The very first year or two the cherry was quite heavily tinted - much more like current tinted cherry. I recall when it was decided that it was just a bit too orange tinted and so there was a move to a more clear coat to reduce the orange tint. IIRC this was when Castle Acoustics were still making the Fraim shelves. However, light tended to darken the clear coated cherry and lighten the heavily tinted cherry, so after a while you could mix them all up and they would look OK - that’s what I have at home across three stacks, along with SL2s built from a pair of early cherry cabinets that needed some cosmetic repair after a shipper damaged them. Initially the cabinets looked almost like they were Rosenut/Rosewood, but they have mellowed a bit over the years.