I was referring to his interview with tom tom audio about working at Quad…….if it measures good it is good……. Just need to measure the right things, this being the problem. Naim and Quad being bipolar opposites.

We are all here because we like Naim’s “house sound”

A good assumption to make, but, actually, I’m here because I like the vibe (and the people obviously) in this forum. I do actually like Naim gear, but my main gear is not Naim. 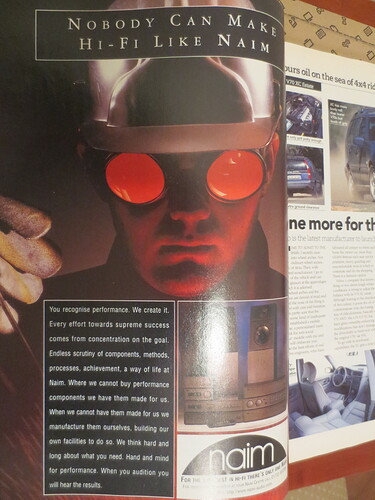 When the Covid situation is clear you should ask your dealer about a visit to the Naim factory. There you can find out about some of the “little things” such as the formed legs on resistors.

When I first started at Naim as customer service manager, the first few weeks I spent time in every department, on the factory floor, as that’s the best way to learn what Naim is all about. One of my first jobs was in the PCB department where I took big green resistors and formed their legs around pins on a very neat little wooden jig - one of many for different tasks such as this. From what I understood it was a relatively recent discovery (at the time) that in the power amps, they sounded best with these big green resistors lifted off the PCB and suspended thanks to a carefully formed bend in the legs - the so-called “resistor lift” .

These small things that we would normally not think about is what makes a company a cut above the rest. Attention to detail at its finest.

From what I understood it was a relatively recent discovery (at the time) that in the power amps, they sounded best with these big green resistors lifted off the PCB and suspended thanks to a carefully formed bend in the legs - the so-called “resistor lift” .

Do I assume these are metal film resistors… there are some interesting papers in the AES that go back quite some time investigating the microphony effect of certain components in audio circuitry, more typically but not limited to capacitors, … and the approach you mention is like a kind of mechanical spring which I have seen elsewhere, as well as allowing effective heat dispersal… an issue with resistors, albeit more typically carbon film where heat changes the properties and adds distortion.

I think some of the tweaks in Naim designs do seem to be about electro mechanical resonance mitigation … and clearly are very effective in these designs.

Trying to work out what you are describing here… I think you are talking about phase response … which effectively means minimal filtering in the pass band and carefully managed feedback circuits … which absolutely are key attributes in low distortion amplifier design.

Though some studies I have read show our hearing system is not sensitive specifically to such phase distortion, but it can mask fine transient detail or stereo spatial material which can be noticeable if present in the recording.

Often a reason why fast or wide bandwidth amps can sound more natural in my opinion… when matched with the right components.

I love the attention to the micro details. One theme that springs to mind is who determines it sounds better? Is there a focus group of Naim employees or customers? Is it a well honed ear of one or two people, in which case, how does that get passed down to the next generation? How will the Naim sound be maintained long term?

How do Naim voice their equipment? Hi-Fi Corner

As a member of the Beta test group there are often comments re. the difference in SQ between various Betas. This set me wondering ‘how is the sound quality of the equipment ‘voiced’ & whose ears, if any, are relied on?’. Is it:- 1 Purely by a computer programme setting the parameters? i.e. coding bass, midrange & treble by numbers. 2 Purely by Naim engineers listening to the equipment with a set playlist? 3 A combination of 1 & 2 above? If it is 2 or 3 above what music is used f…

There must be enough data from measurements to build a strong correlation between old golden ears and the naim sound to create an electronic set of golden ears. Golden eEars?

Surely, by definition its a secret.

Once you know the secret behind the magic, it’s not magic anymore🤔

How will the Naim sound be maintained long term?

It has been suggested in various threads over time that the “Naim sound” has reduced over time and reduces as you go up the amp ranges. Given that as I understand it a, or maybe the, primary sound quality driver for Naim has been timing, I formed an assumption on this, though no idea if correct: I am guessing that earlier on and in the lowest models the focus on timing meant other aspects of performance may have been more compromised, and it is that tgat created a house sound. Then over the years greater development meant greater ability to improve those other aspects without adverse effect on timing improved, likewise going up the range with greater expense on design and product, in both cases reducing tge prominence of that sound character. Maybe at its ultimate there is no “Naim sound”, just perfection, opening Naim to people who want more of a neutral accurate sound (once Statement prices drop to affordable!).

I personally feel the full circle has been completed, With black box classic series being the pinnacle as far as the “the Naim sound” is concerned.