Firstly thanks to the members who helped on my first post re Naim pre/power combinations.

Well I have now a quite a stack and as I understand it there may be a right and wrong order in which place each unit?

I have an Atacama Evoque Elite Rack System with 6 shelves;

I realise I will have to put 4 half size units on 2 shelves - and my thoughts there would be Core & DAC on one and MF Phono & TT PSU on another but not sure on order?
Any help would be much appreciated.

Thanks in advance
Simon

I know there’s likely a defined base shelf, but I split a 7 shelf Atacama into two, putting the more sensitive kit into the stack with the dedicated base. 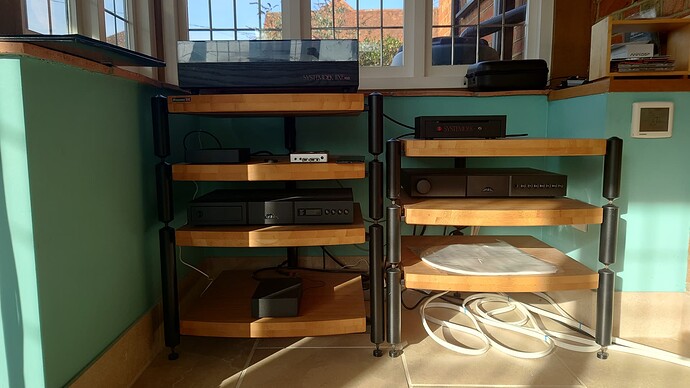 Done for various reasons, not least of which I do not want a tall rack in the room.

(Russ Andrews strip behind it too!)

Yes I see what you’ve done but I can only have 1 rack as I don’t have space to split them - as you look left to right from my listening position which is on the right side of a three seat sofa (but in the middle of the speakers) its Hi-Fi rack/left speaker/fire place/right speaker/large(ish) tv on separate stand (with small system and small speakers underneath - tv sound is rubbish!)
So basically FlatCap to the bottom, power amp, pre amp, cd/dac, phono, turntable.
Would the TT psu be best out of the way or will it be ok next to phono stage
Thanks

I think keeping PSUs away from phono stages, where possible, is best

Do you think it would hurt too much if I put the TT PSU on top of the FlatCap?

I honestly don’t know, but suspect it would be better that way, than close to the phono stage

Can the uniti core go elsewhere?

Don’t think so - I’m basically using it as a CD Player rip then listen, into DAC and onwards