Hi, first off thanks for letting me join the forum

I have been the happy owner of a Naim Nac 112 and Nap 150 for a couple of years, but have noticed a drop in sound quality in the last few weeks.
I have indentified the problem to be with the Nap 150, as i have a diy power amp which i have used with the Nac and all seems fine.The issue is mainly with bass, its become very boomy. 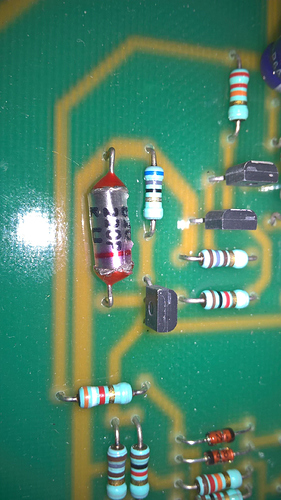 When were the pre and power amp last serviced? If never, they will be well past their best by now.

It’a a 220p capacitor. Caps have a certain lifespan before they need to be changed. If you don’t know what that is then you don’t have the skills to take it further yourself. It can in worst case kill you or burn down your house.

Thanks for the reply, having only owned them for a couple years there history is unknown, so a service is overdue.

Thanks for the reply, and identifying them as caps.I don’t plan to replace them myself !

looks like a polystyrene cap which don’t usually fail, but i would think the main power supply caps are getting tired

Thank you, i guess it’s best to get it serviced.I think the sound quality has been deteriorating for awile, it just lost that Naim sound

It wasn’t until i tried the DIY power amp with the 112 that i relised how bad it had got.

Indeed, those capacitors will last for decades. If anything your main electrolytic reservoir caps will be the ones causing a problem through degradation.
It’s quite common to find they rattle when removed from the PCB as they have become internally dry (presumably).

Darran at Class A serviced my 150x a couple of years ago.

He used Naim provided caps and other parts.

He said it would sound better than it did when it was new, as the parts were even better than the original ones.

And indeed it did and still does.

It is true that we do use a different brand of capacitor now.

Whether they sound better than the original ones is down to your ears!

Thanks Neil for the confirmation that the caps are of a different type.

If I’m totally honest I can’t say for sure that my amp sounds better than it when I bought it in 2004.

So many other things have evolved, including my ears and tastes, as well as all the other components.

And it’s so long ago - I struggle to compare changes when they are 10 seconds apart sometimes.

But my system definitely sounds much much better than it did then.

I wouldn’t want to cast aspersions, but I think there may be placebos at play sometimes - if you strip your system down and dust everything and replace it exactly as it was, somehow it sounds better. I mean you put the effort in so it must do right?

I don’t know, but it does seem to!

But also there are rational reasons why unplugging your system and rebuilding your racks will make the supports more stable and mitigate cable interference problems and refresh the metal on metal contacts of connectors.

So the SQ really may be better after a spring clean.

And my system really is miles better than it was - not least because it’s set up very carefully now and it wasn’t then.

And because it’s got much much better components in it.

In fact the Only things that are the same now compared to 2004 are the 150x and the snaic and one old Naim power cable that I currently use on a switch.

Even the parts that make up my ears and brain have almost all been replaced.

Absolutely breaking and remaking plug and socket contacts can only be a good thing - high resistance joints is the last thing you want.
Darran is one of our trusted service engineers and no doubt he did perform some magic on your 150.

Thanks everyone for your replies, i have emailed Class A for a quote on servicing the 150.

And i agree unplugging everything and reconnecting once in a while can be beneficial, especially on phono stages where resistance plays a big part.