I have lost the signal from channel 2 of my 300DR amp. I’ve switched speaker cable order, input sockets and used two different pre amps, blusound node and any A&K player but whatever configuration I have, the signal is dead from that channel. Any input much appreciated.

The DIN 4-XLR cables are specific to each channel so swapping them won’t work as a test of the cables, you just get nothing on both. If it was working on both then you lost one channel it will be a fault rather than a wrong connection. With the tests you’ve done I think you’ve got it down to the cables or the amp. If you have an Ohmmeter you can check the cables yourself but since you haven’t mentioned doing this I suspect you haven’t so it’s back to the dealer to get the amp and cables checked out and if you bought used privately you’ll be looking for one who’ll cooperate. Many will but some can get a bit shirty if you’ve never bought anything from them.

Thanks Yeti. I dismantled the system for a move so the issue has only arisen since I put it together again. The 6pin interconnects from the PS to the amp are identical, as in there are no markings to suggest which cables go where other than the Ch1 and Ch2 need to align of course.
The 3pin audio input is the usual red and black. I can swap them and still get a signal, but only from one channel, the same channel, regardless of how they’re connected.

Did you connect the cables to the 300 in the same manner as before? There is a right and a left channel cable (but as Yeti wrote, connecting them the wrong way around gives you no sound on either channel, so this is probably not the issue)

The 3pin audio input is the usual red and black. I can swap them and still get a signal, but only from one channel, the same channel, regardless of how they’re connected.

As far as I can tell. The six pin power interconnect cables aren’t marked as far as I can see, so I imagine it makes no difference which cable goes where as long as Ch1 goes to Ch1 etc. This is the power cables between the units, not the audio cables from the source. The result is the same whichever cable is used,

I meant the signal cables (DIN-XLR from SC to 300), but as mentioned this is probably not the problem because you would have no sound at all if switched around

Appreciate your input. Thanks for the clarification. However, as I’m not using a Naim streamer (I sold my nac 272) I’m using Din to Phono interconnects to my Blusound node streamer.
The left and right audio input terminals are interchangeable ordinarily from a technical standpoint of course, in that they work when switched around, just in reverse. But, when I swap them over, the same channel is dead. So I deduce that the amp is receiving a signal through both cables from the source.

Thanks, I was not clear about your setup at all, but I think I get it now, and if your RCA-XLR cables are not both broken, I agree it sounds like a channel in the 300 might be dead

Each RCA-XLR lead should be wired differently (see the pin diagrams for each channel on the rear panel as per the picture here) if they’re to work properly - they certainly shouldn’t be interchangeable as the pin connection in each XLR is different. 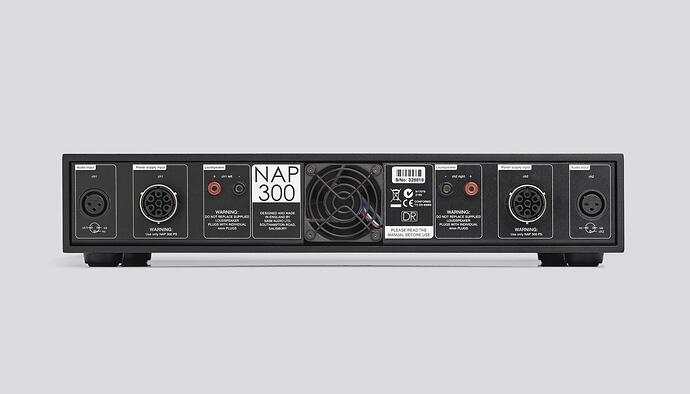 Ah. Thanks Richard. If I understand that correctly, does that mean I need different cables for each channel and so my identical bog standard xlr to rca cables wouldn’t cut it? Sorry it’s taking a while for the penny to drop.

Yes, you’ll need each one specifically wired for each channel.

Be clear, XLR isn’t DIN but you seem to be using the terms interchangeably and it’s getting confusing. Just what are you setting up post move and is it different to what worked before?

An RCA to DIN suggests you’re connecting a source to a Naim pre amp, you’d then take the signal from two of the DIN 4 sockets on the pre amp power supply to each channel of the power amp by separate, non identical cables, colour coded with red and green bands.
RCA to XLR would go from a non Naim pre or source to the power amp but again the cables wouldn’t be wired identically.

In either case checking how the cables are wired against how the sockets are wired at the Naim end, it’s in the manual, might give you a clue. Naim use XLR sockets for the power amp input but not configured in the way commonly available for balanced use.

Do you have the original DIN to XLR cables that were supplied with the 300? The simple solution might be to have these re-terminated with RCAs instead of DIN plugs at the preamp end, then you can be sure that the XLRs will be wired correctly for the power amp.

Thanks All.
Yeti - sorry I confused things mixing up XLR and DIN, I definitely could have been clearer.
Richard - I’ll see if I can get compatible cables before returning the unit.
Chris - That sounds like a possible solution.
Just out of interest, is it just NAIM that wires the interconnects that way? Prior to this I would have thought source audio interconnects were standard, ie if the L and R are wired differently, they’re at least wired the same across brands. I use those same xlrs on all kinds of audio equipment here, Genelec 8020D monitors, Tascam audio recorders, Rode microphones etc and not ran into an issue.

Just out of interest, is it just NAIM that wires the interconnects that way?

These cables for the NAP300 (and the NAP135s and NAP500) are unique to Naim - hence why they come as part of the package. If you want RCA Phonos in place of the DINs then either have the supplied cables re-terminated by your dealer, or else ask them to make up some custom i/cs for you.

Naim uses XLR plugs in this case, but they are NOT balanced and therefore wired differently (as shown in the pictures next to the sockets on the amps)

As Richard wrote above, ask someone who knows how to rewire them with RCA instead of the DIN on the other end, preferably a Naim dealer to avoid any errors.

However, if the cables are wrong I have no idea why it apparently worked before you dismantled the system, so this may or may not be the cause for the silent channel now

That makes sense. Thanks for the clarification all, and thanks for helping me sort this out, hopefully its saved a ton of downtime and expense at the service centre.