I would be grateful for any advice choosing and setting up a NAS drive for streaming to a Uniti Nova. Would something like the Synology DS220j running Asset UPnP be a good choice? Do I need the more powerful Synology DS220+?

I’m thinking that an SSD would be a better storage option than a mechanical drive - quieter and more reliable? WD Red for instance?

RAID with disc mirroring seems to be the normal setup, but maybe a single drive would do since I already have my music files stored on a Mac and backed up with Time Machine plus Cloud storage.

Anything else I should be considering? Thanks.

Perhaps try a forum search first to get the info and advice you need. There are countless threads here.
Good luck anyway, its not complex and doesn’t have to be overly expensive.
Happy New Year to you.

Hi Nick, a Synology (or QNAP) would be ideal.
With your existing back ups, a 1 bay would be OK, the Synology DS118 has more computing power than DS220j, so I would go for DS118 that rather than the DS120
SSD options are a good idea, but noise is not a real problem, my DS214 lives in a cabinet in the listening room & the only time I hear a noise is when it’s starting up after a power down.

Exactly what we run.

Synology can integrate with some cloud services, so we backup directly from NAS to Google cloud. Easy to setup via Synology Wizard.

You can have a 2 bay Synology out of box, drives fitted, networked, RAID mirror configured and Asset installed in under 30 mins.

Id not bother with SSD, get a nas rated rust spinner, i.e. traditional hard drive. Asset and dB Power amp to rip cds is all you need.
Buy the best synology nas you can afford. Their online support is great. My 218+ has 6Gb of memory and always " just works".
Others will roll in and tell you you need a naim core or a melco. You don’t. And being connected to your network via ethernet means ot can sit anywhere. Mine sits in my study. I never need to look at it or hear it. In fact, it could be anywhere on the planet as far as I’m or my ndx2/muso2/node is concerned.

Hi @nickrich. I wouldn’t let the noise of a mechanical drive be a reason for choosing SSD. The Synology in my small office is very quiet — it never interferes with listening to music there. But, if it’s a problem, you can put your NAS in a different room from your hifi.

FWIW I have exactly the same NAS setup as @IainO and it works very well. I bought mine with the drives already installed and configured, so setup time was zero.

Asset doesn’t stretch a modern NAS at all - even when transcoding on the fly CPU usage is low.

We fitted extra RAM to our DS as we did, for a short while, run a couple of virtual machines now replaced by a Ubuntu mini PC.

How much do you listen to local music - is it most of your listening? Do you add content often? Do you need a very large capacity? How do you back up? Will you be using the NAS for something else? Just some questions to help decide I guess - if yes, servers may be useful I suppose, otherwise in my case of limited local music use (mostly streaming and vinyl) - as with all my hifi - I like things smart and simple, so have gone for a USB high quality Melco E100 HDD. It’s a specifically improved design for audio use, very quiet, sounds great on comparisons with CD or streamed HiRes content, and the Naim app takes care of it all, done.
I know the E100 is more expensive than an average NAS but there are cheaper quiet and good sounding drives and unless local is exclusively what you are listening to, not sure why I would keep a whole dedicated computer unless shared for other duties.

Buy the best synology nas you can afford. Their online support is great. My 218+ has 6Gb of memory and always " just works".

If you intend (as I do) to simply use the nas to stream music, memory size is unimportant.

Below is the memory usage of my 256mb memory nas streaming Hi-res. Streaming doesn’t actually use any memory.
The drop in memory usage was due to turning off the LMS, which I wasn’t using as I was streaming from minserve.

If you turn off every app except the media servers used to stream and disable all automatic scanning, (as I do) I doubt CPU size is important. 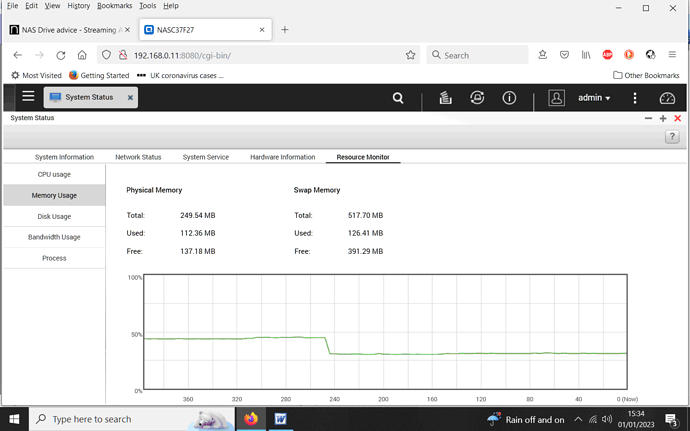 But that is the fun/appeal of the nas over a core or melco etc, you can use it for other things and at the same time. Mine stores photos and all my dvds/blurays. So yes, it does serve up .flac files brilliantly but all the other stuff too. I did use it to run roon. Now, that did stretch it a bit, but never slowed it down. But i binned roon, and went back to asset and the naim app.

Thanks everyone for your suggestions - lots for me to think about there.

To answer your questions garçon, I listen half to local music and half to Spotify. Additional content is only occasional now. Backup arrangements mentioned in my original post.

At the moment I use my ancient (and noisy!) NAS to store photos & videos as well as the music, but am thinking it would be useful to have other options for the future: maybe a Plex server or something I haven’t discovered is possible yet! So future proofing with something more capable is what I have in mind.

Good advice in previous comments. I have used a QNAP four bay, which I have just upgraded with 4TB discs as a music source in the past. If I was starting now I would go with Synology because my IT friends tell me that QNAP might be vulnerable.

I used the QNAP as a work / music server for 7 years before moving my music to a dedicated Roon server. The QNAP is now a Raid 5 system with a copy of my music, with more copies on old hard drives. It’s not a perfect backup system, but with a couple redundant hard drives off site I hope I’ve covered most eventualities.

How about a Raspberry Pi / Asset / Portable hard drive. Can be run headless from iPad.
Much cheaper than a NAS and no noise.

Would something like the Synology DS220j running Asset UPnP be a good choice?

Yes. You have a lot to choose from. We stream music up to 24/192 and DSD128 over our home network via Ethernet cable. We have found that a high performance NAS is not essential for streaming, although we tend to go for mid spec because our NASs do a lot of work besides storing and supplying music files. We’re slowly switching to Synology, currently running a DS1520L, 2GHz 4 Core celeron, 8GB RAM, which is way more than we would need for just local music streaming.

We used to be standardised to QNAP but we have suffered two motherboard failures resulting in a non repairable NASs, and a CPU fan failure on a three year old top spec model for which no one could source us a replacement part, meaning I had to bodge it. We don’t recommend QNAP any more.

One word of warning re separating out NAS from streamer in n different room - if using a mesh network, connecting the NAS to a different node in the network to where your streamer gets it’s connection can create a massive headache. I had this issue for a while in my streaming setup and Google mesh network. Solved by getting an EE8 and putting them all onto a single node.

@nickrich Unless you already have another NAS as a backup server, I strongly recommend configuring the second drive as an incremental backup rather than using it as a mirror - a mirror drive is NOT a backup.

Good advice, bit I would strongly recommend putting that second drive in a second NAS enclosure for resilience. There are, as I’m sure you know, plenty of things that can damage a NAS other than just the failure of an individual hard drive.

Google mesh devices have been known to cause issues for a number of users due to the fact that they cannot be configured to work properly in some types of home network. This should not put people off using mesh networks in general.

I have a Qnap HS210 (an old Fanless model) with 2x2To SSD.
use minimserver for music server.
and don’t forget to save your music library