Tried to listen to something via my NDS today, and discovered that my QNAP TS219Pii NAS has ‘died’.

Pressed the power button - no response. Unplugged the external 12v 5amp power supply from the NAS, only to find that the connector was red-hot. Left it alone for 20 minutes until it had cooled down. Plugged it back in. Lights came on the NAS for less than a second, then it ‘died’ again. Connector was immediately red hot. hmmm … fire risk? …

Tried to contact QNAP support via t’internet, but the website wouldn’t let me log in, even when I tried to set up as a new user. After a little effort found a UK phone number for them, and spoke to a support person. Told him that either the power supply or the NAS was faulty (not under warranty as >8 years old).

So - what do you all think? Should I give that a try? It will probably mean getting a multipurpose power adapter of same spec, hopefully with adapters so that I can actually plug it into the NAS. Or should I just bite the bullet and get a new NAS?

If it’s a new NAS, what specs should I go for? I only use it for storing audio files, which I access via Asset UPNP (installed on the NAS). I use a 2 bay drive with 4TB drives. Does it really matter how much RAM it has and how fast the processor is?

Think I’ll just listen to LPs until I sort it out.

Get a new one.
Don’t spend loads, they have come along way in 8 years.
Get SSD drives too.

Do you have a backup of the NAS? Do you care about recovering the files that are on the NAS?

My synology 218+ was £300? Via amazon. I expect cheaper now. Dropped my ex WD nas drives into it and it sorted itself out. The wd drives are 5 years old now, but still perform fine. Both are 6TB and run in mirror raid mode. So if one dies I can pop another in and it will sort itself out. Qnap or synology are the favourite nas machines as 3rd party apps are well supported such as asset,roon and mimimserver. I added extra ram, because it was cheap, but doubt it made any real difference. Think I added a 4Gb to make a total of 6Gb.
Anyway, great nas, switches itself on and off and serves up my cds well. Why would you want a Melco or Core or anything else?

I have 3 TB of audio data. Rather expensive to buy SSDs, perhaps?

Yup. More than one, in fact.

Yes, but quieter and no mechanicals to break down.
Just a suggestion.

Then I’d recommend getting a new NAS and not wasting time with the old one. As others have said, nothing fancy needed. SSD has its advantages, but obviously a cost question. Fewer breakdowns, but that may not matter much if you use the 2nd disk in the 2-bay for an internal backup.

Get regular HDDs but make sure they are rated for Nas use. They are designed to last a lot longer.

That’s the way I do it : Mirror drives

Just been looking on Amazon :

Sounds very similar in spec to my current NAS, ? slightly slower processor, but 1GB RAM. Think it will be adequate?

Should be able to just use the WD Red Drives from my current defunct NAS.

Qnap have a transfer compatability site and these two are compatible. It also gives details of what to do.

Thanks. I’ll order one tomorrow. Don’t want to order it tonight as we have our usual grandparents’ duty tomorrow so wouldn’t be here to accept delivery.

I would check to see if the resistor fix will work first.
https://forum.qnap.com/viewtopic.php?t=157459

I doubt it it’s not got the Intel Atom C2500 chipset that has the issue, my Synology 415+ had and it went pop. 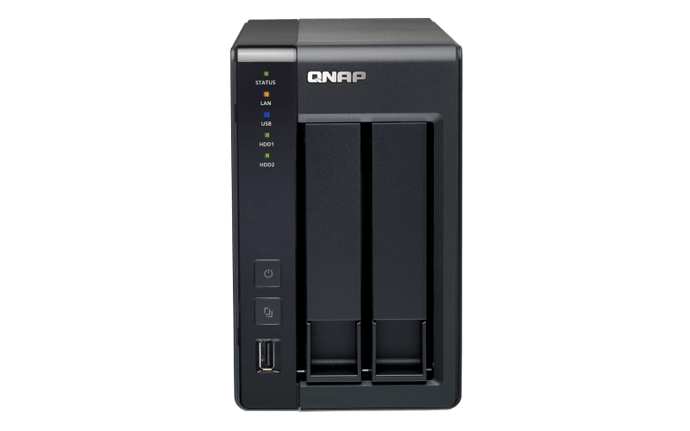 Has anyone some real life and/or MTBF info on typical NAS & HDD life.
Might be useful to exchange whatever we have on this & help everyone plan for future needs.

My Synology DS214 was bought in 2014, its still quiet, no sign of problems, WD Reds are still running quietly. The only thing I’ve done is pull it out & open up for a dust clean every other year or so (the fan moves dust inside & it sticks around the vents)
Next move will be go for a model with more CPU & SSD, but not for a while yet.

Will depend on the HDs and their specs should state the MTBF. I have a 5-bay QNAP also with WD Red (5 TB each as a Raid 6). It’s now 10 years old and S.M.A.R.T. is reporting 100% healthy. However it has been light usage with just one daily backup run from my work machine and some light video streaming for a few years before Netflix

Nas rated drives are the key.
My WD reds started life in a rather poor WD Nas, but were transferred to the very good Synology about 18 months ago.
The Nas used to be on 24/7, but now only runs during the day at weekends and in the evening weekdays. Not least to reduce any unnecessary electricity consumption. I ought to look at the running hours of the drives.
Whilst ssd appears the future, they do degrade. Usually with lots of writing to, rather than via reading from them.
The most robust drives are the ones used for cctv recording. They get a 24/7 hammering.
If you use a simple 2 bay set up in mirror, you should not have an issue. Just replace each drive as after it fails. Although I do also backup my catalogue to a separate HD on my PC to avoid having to rip to Nas ever again. But that is overkill.

Why not get something lik a dell optiplex and stick it in the cupbaord, these NASes are all way over priced and underspecced.

just as a footnote on this - my older QNAP HS 215 would not upgrade the firmware and with the recent issues on QNAP with mailware, I decided to get an newer QNAP which I have been running now for a couple of month TS 251+ which I have to say is superb