After everyone’s good advice on my cd player dilemma I thought I’d seek some advice on the possibilities for taking my system active
Currently running an all olive system with mk1 sbl
Nac 82 hicap nap 250
I have another power amp which is bolt down cb nap 250 . I’ve seen an olive naxo for sale and was wondering what would be involved in making this work ? I also have a spare flatcap olive if this is any use .
Am I barking up the wrong tree ??

The two NAP250s will need to be closely matched (is the other one a bolt down as well?) as each amp will power a different channel.

A Flatcap can power a NAXO but you’d be much better off powering it from a HICAP.

Do you know the provenance of the NAXO? Was it originally for SBLs or something else?

Would it not be possible to use the olive 250 to power the tweeters and the cb250 the bass/ mid ?

I believe the amp to driver allocation varies with the version of NAXO…?

That would require a SNAXO 242. The NAXO can be re-wired but it’s an unofficial modification (and can cause real damage if not fully documented and re-labelled) and falls outside of forum AUP.

Ah right
So in effect I would be using each 250 as a mono amp to power one speaker with the two channels separately driving bass/mid and treble ?
The reason I find this confusing is my background is in live pa equipment where we would use 3 stereo power amps ( one each for bass , mids, treble) fed from a 3 way active crossover . The left and right channels driving left and right speaker stacks .
I cant get my head around how the snaxo crossover works when placed in front of a stereo power amp driving one speaker

If I understand correctly, the latter SNAXO242 or SNAXO362, does exactly what you are expecting, like in a live music PA system.

I am not claiming to understand how the earlier NAXO’s work, now……

With a 3 way version you would have the same arrangement for the HF and MF, with the LF split between each channel of a third power amp.

Ideally of course, back in the day, you would have mono amps (NAP135s) used for each drive unit, hence where the terms “4 pack” and “6 pack” come from in Naim parlance.

Hence the reason the power amps need to be a matched pair . I naively thought I could make use of the spare nap 250 and cabling I have, to go active at relatively low cost by buying the naxo .
I couldnt justify the cost of the snaxo .
Ho hum back to the drawing board

Here is the diagram taken from the Naim NAXO Manual, for a 3 way, NAXO 3-6 based system: 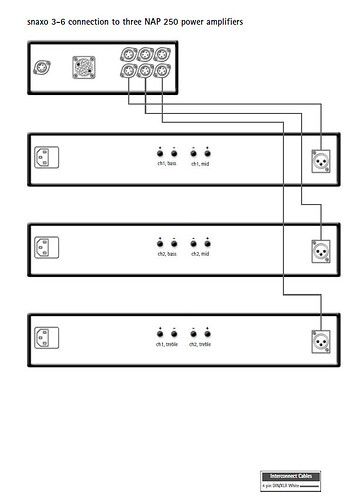 [I found the complete manual, as a pdf, on AVOptions website - and have saved a copy. However, I cannot now find my way back to it, no matter how hard I try… (yes, I have checked my Browser History…) Grr…

One suggestion if using a CB NAXO24 is to have it serviced by Naim. I did this with mine when I still had SBLs and the improvement was noticeable. Also you will need at least a HiCap to power it up. If not serviced, worth getting done. Enjoyed SBLs driven by 135s, then 300s for many years before moving on. Driving them actively opens them up quite noticeably over driving them passively. I would say it is well worth the investment.

The star of which just has to be the 1985 calendar!

The naxo I was looking at is an olive but my problem is that the two power amps I have are different. One is an olive 250 and the other is a cb 250 so unless the naxo can be used in the same format as the later snaxo then it wont be worthwhile

The non-bolt down CB250 and Olive 250 were the basically the same amp in different cases. Problem (potential) that you have is the bolt-down version of the 250 may have different components to the the other models. An option that may work is to have Naim adjust the bias on the amps to the same value (attempt to closely match the amps on output). When assembling an active system this is something that I have had Naim do, match the bias on all the amps. Unfortunately it means sending the amps in and having to resort to other amps or resetting to a single amp and passive mode. In my opinion, well worth the inconvenience for the gain in sound quality.

IIRC, there’s a small gain difference and the amps use different output devices and different transformers, so I would not recommend pairing them on an older 2 way NAXO or SNAXO.

I do agree with Richard on not mixing and matching various series of equipment if at all possible in an active system. Any discrepancies between amps (particularly with the older crossovers due to the vertical amp arrangement versus the horizontal of the current crossovers) will be apparent. Even small gain differences (you will inevitably have an off-centre balance setting to try to offset the gain differences) can/will be readily apparent when using the older crossovers. This I know from my own experimentation over the years.
I do know there was the change in transformers from the Holden & Fisher to the Tolema ones during the Olive phase but was under the impression the output devices were the “same” Motorola devices until production of the devices was discontinued by Motorola. Was that at the end of the Olive series or during the Olive series?
As I have no experience with the “bolt-down” series of CB, have no idea about variations of the transformers and/or output devices and/or circuit refinements between those earlier versions and the full case CB series.
Even if one has two or more amps of the same series in an active system, if they were not purchased at the same time and do not have consecutive serial numbers, would still urge one to send the amps in for servicing to ensure they are as closely matched as possible for overall performance regardless of whether an older crossover or a newer crossover is being used. Having an older crossover serviced as well to ensure the crossover points are set correctly and all other internals are within spec is something that I would also highly recommend based on my own experience. Having the units looked at by a qualified Naim technician is particularly relevant when building an active system if buying equipment on the used market. The peace of mind and sonic gains are well worth it.

the change in transformers from the Holden & Fisher to the Tolema

I understood the new/present transformer supplier was a company called Nuvotem…?

The Bolt-down NAP250 used BDY58 transistors. The gain was increased in 1980 when the NAP250 was re-engineered and moved into the U chassis and one piece extruded sleeve. Custom made NA001 transistors replaced the BDY58s in 1982. The transformer was uprated from a 400VA to a 500VA one in 1984. With the demise of Holden & Fisher in 1993, Naim changed supplier to Nuvotem (IIRC they basically took over production and took on ex H&F staff).

Thank you for the great information Richard, much appreciated! Is Nuvotem the same as Tolema?