You are very lucky is all I can say. Probably the reason not many people have noticed the problem is that there aren’t many files of this size. I know I wasn’t the first person to report it to Naim as there was a thread on the old Naim forum that dates back to 2017, I think.

I do wonder why the same file plays in full on a Naim Atom but only plays a small part of it on an NDX. Can you explain that?

I don’t think it normal to have DSD albums of less than 1GB, in my case I can’t find one that is smaller than 1GB, most are closer to or even larger than 2GB
No I can’t explain it, 'cause I don’t have the problem.

I advise to flag it up to Naim again & don’t let it sit without a response, keep pushing, they normally are very good ITR.
Also include a link to this forum thread.

“I don’t think it normal to have DSD albums of less than 1GB, in my case I can’t find one that is smaller than 1GB, most are closer to or even larger than 2GB
No I can’t explain it, 'cause I don’t have the problem.”

Ahhh !!! I will go searching what I have, but as yet I’ve never had such or similar problem. … so suspect no individual track of that size (length) 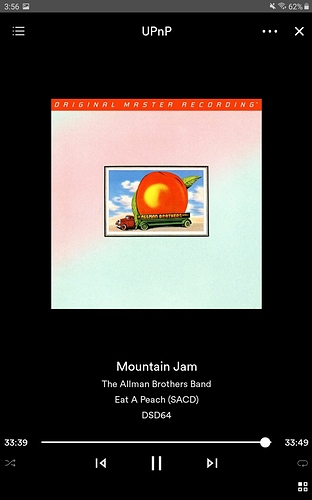 Well,the plot thickens then.
I ripped it the same way from the same source MFSL SACD and only get it to play complete when I rip as a DFF file. DSF only plays first 8:19 minutes. NDS on V4.7
Tried playing from uPnP and USB. Both fail.

As Naim confirmed there was an issue, as mentioned by Olik, it would be nice if someone from Naim could chime in.

would be nice if someone from Naim could chime in.

Naim don’t routinely read the forum, best you e-mail Customer Support & include a link to this thread

I believe it is the the way the NDX(S) talks to the upnp server or an issue with large .dsf files. I copied the sacd album to Asset Upnp on my NAS (see profile). Then loaded the Naim app and look at what I see: 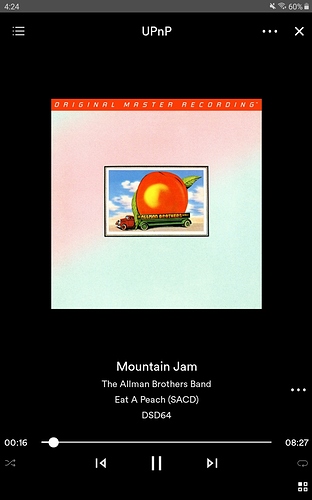 Converted Mountain Jam from .dsf to .dff then transferred the dff file to my NAS. Loaded it up in the Naim app and it all looks good for length. There is an issue with large dsf files and the 4.7 firmware (my guess). Dff is ugly with no metadata, but it plays fine if you can ignore that issue. 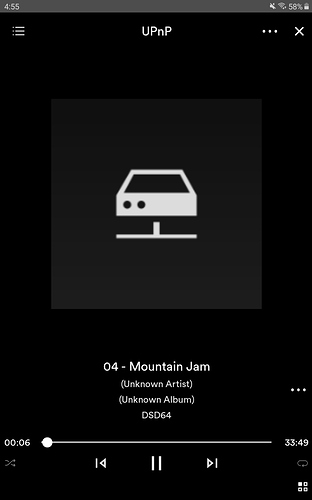 Not familiar with Audirvana but when I take a look at their website they say " Audirvana always transmits a “ready-to-play” audio stream, i.e. a PCM (or DSD) stream already decoded".
So it changes the bitstream presented to the Naim firmware. Could explain why dsf plays okay with Audirvana.

Likely so, there are settings for each endpoint in Audirvana so with the NDX I set that it accepts up to DSD64. When I view in the Naim app the Audirvana stream, the app reports DSD64. There are some bitstream differences as you say, enough to make large dsf files work.

Anyway, reported this problem again to Naim support with a link to this thread. Will see if they come up with an answer. Can not imagine this is hard to fix in the firmware coding.