While it still requires a mobile, in an emergency you can install the app on any other Android or iOS device you happen to have lying around. If you have an M1 Mac, you can install it there, too

I mainly use mine to adjust the volume as it’s quicker than going to the iOS app.

How else will Naim know what their customers want?

Write Naim a letter, call or send them an email. 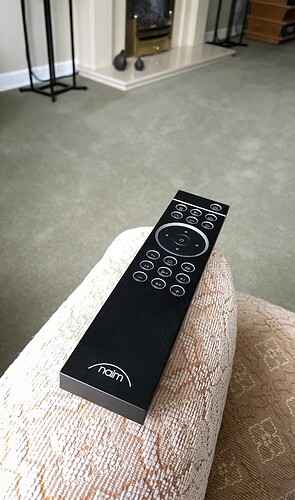 The question is - how come it’s not standard with the NDX2 which now costs over €6k? Reminds me of the Muso Mk1 remote scenario. It’s incredible how a brand lets itself down badly over a few quid.

The 500 series sources have always been supplied with posh remotes, it’s part of making them special. The remote could of course be supplied with the NDX2, but it would add £500 to the price and dent sales accordingly. You could add a PowerLine and another £500 too. It’s surely best to keep these things optional, in order to make the entry price as reasonable as possible.

Sure, but a 6k streamer deserves a posher remote not the nasty budget version.

A lot of people think they deserve a lot of things but they aren’t going to get them.

It’s not a matter of deserving anything, it’s more about value. I got 2 remotes with my mid range Samsung telly, one normal type with all the functionality and one really nicely and ergonomically designed remote with just the basic functions. Nice touch. To me it makes no sense to sell a premium product with a sub premium accessory - it does the brand no favours. Anyway, we digress……………

Write Naim a letter, call or send them an email.

Sounds like a good idea …
…except: I tried that some years ago (re: the NDX - change of display from Album Artist to Track (Contributing) Artist which did not suit me) but it got me nowhere. In simple terms I was told to go away and stop bothering them.

Also, a missive from one owner is unlikely to match the impact of many forum posts suggesting X or Y. We can see above that not everyone dislikes the new remote … or the fact that UPnP is not accessible from the screen or remote. But enough posts asking for a change might have the desired effect.

But enough posts asking for a change might have the desired effect.

My understanding is that Naim’s Marketing or Development team members do not monitor the forum. They have moderators who enforce the Forum guidelines and they will occasionally bring an issue or question to someone at Naim HQ. Otherwise folks are encouraged to open up a ticket with support.

I might be wrong but discussing future changes/enhancements here on the forum does not have any follow up action from Naim. Like whistling in the wind…

My reading of the responses to the thread seem to indicate that most folk actually dislike the NDX2 remote, it’s the associated functionality where there is a difference of opinion.

It doesn’t bother me sufficiently to write letters, but this and a few other reasons are making me reconsider any future investment in the brand.

I’ve had most of my system for years and love it to bits but I definitely think I’m on the “diminishing returns” track now and getting a (to me) substandard remote doesn’t help.

The majority of Naim owners stay with Naim for the kind of sound, not the features, even sacrificing some comfort and accepting humming ps.
Then another part for the Naim aesthetics or reputation as a solid uk brand.
There are other brands with better value per cost, but no one with that sound.

I am however not saying I deny your experience.

I also think that not being able to use the remote to access an UPNP device is a big error in the useability of the NDX2 and ND555, also the quality of the plastic remote you get with the NDX2 is awaful - I cound not stand using is and purchased the MUCH nicer metal remote that comes with the 555 and paid the really silly asking price Naim were asking for it…

Dont know if NAIM plan to update the functionality of their screen, but the ability to be able to use the remote to access UPNP devices and improved disply informaton would be a great step forward in the useability of the NDX2/ND555… for goodness sake there was better functionality with th old NDX…!!

I suppose a lot of this depends on how you interact with the device. I use Roon via an iPad so the display, nice as it is, is a feature that I don’t really use. While I can see it might be useful to be able to use the remote to access and navigate the library, it’s a bit archaic and not as useable as a phone or tablet.

Same with the remote. Here, it’s usually used just to select the TV or DVD input or maybe put the NDX2 into Network Sleep. The remote is functionally fine and I’d much rather money is spent on engineering the bits that matter rather than be spent on the accessories.

If you think you can do anything without your phone nowadays, you are sadly mistaken. This is just another example of how intrusive it has become in our lives.

I also hate the NDX2 remote. I hate touching it. I hate looking at it. It’s the worst remote I have ever owned. The remote on my Roku is even better.

Imagine…
a tablet, a smartphone, an app store…
Did someone “then” seriously consider that there were no more cellphones from NOKIA or BLACKBERRY?
Much earlier I only knew Apple from records

But the apples on the phones have yet to prove that they are just as durable as records.
Now I have an 8-year-old device for which the app for operation is no longer available in the app store. Old apps can’t be transferred to new devices… Now I keep an ancient tablet in order to be able to continue to operate this device.
And then at some point I’ll end up guarding an ancient iPad pro to operate the NDX2 ??? Wonderful
… — …

One way to look at it is that the 555 remote costs the same as a phone, so get a phone, install the Naim app, and pretend it’s a fancy programmable remote

Not a lot of love out there for either the remote or the limited functionality of the screen interface it seems.

Regarding the functionality aspect, my (admittedly cynical) guess is that Naim would need to pay the software engineers, who write the microcode for the display, wodges of cash to make it work properly so decided to not bother and just suppress the functionality.

I also don’t buy the “music is everything” argument either as (to me) once you get past a certain price point, customer experience starts to play a part. I’m sure some of us remember the early Range Rovers with a premium price tag but Morris Marina door handles. The sh*tty remote supplied with the NDX2 smacks of the same attitude.

In my early days of Naim gear, they were regarded as a bit “hair shirt” and there was a degree of perverse pride in owning “eccentric” gear. The upcoming customers are, I imagine, likely to have grown up with different expectations and Naim could find themselves losing market share to brands that recognise the experience part as important.