Networking for Dummies (i.e. me)

Tidal streaming works fine, either via Naim app or Audirvana on Mac OS X. But I’m unable to connect via my Mac to either Minimserver or Bubble UPnP (grey icon on Minim; error message on Bubble server). I’ve forwarded the relevant ports on both routers.

I was previously able to connect to both Bubble & Minim using a single router setup and a different ISP. Any obvious errors or oversights in my network config?

Have you also made sure dhcp is disabled on one of the routers? You might have IP address conflicts otherwise.

ISP router is in PPPoE mode. I’m inclined to leave that one well alone.

Second router is in DHCP mode. On a whim I rebooted it in bridge mode – with my NAC 272 then refusing to connect to the network at all…

Some days I miss my old Linn LP12!

You need to set the ISP fibre router works as a bridge, turning off wifi does not do what you intend it to do,

You must only have ONE router in your home network connecting to the internet or it won’t usually work. You should only have one network for home streaming to work, you show two as you have two routers. So use just one router.
Choose which it will be … you indicate a broadband router… can you not have that as your router?
If not can you put it into a pass through mode if you need it?

@Simon-in-Suffolk - Yes, trying to put the (Huawei) ISP router into bridge / pass through mode as my Linksys has much better wi-fi performance.

No joy so far, although seems other users of same ISP have also had trouble accessing bridge mode. Have sent enquiry to ISP.

My suggestion is use your ISP router as the router, and for wifi use proper wifi access points… not a wifi access point bundled into another router. Try and keep it simple.
Ubiquiti and in the UK, BT, make ideal wifi access solutions that will work with your existing home router. The latter is truly plug and play. But there are many products out there, many are home mesh systems and they work really really well.

If you have more than one subnet active you need to tell minimserver which one to use. From minimwatch select Options -> properties (watch) and you’ll see a screen like this 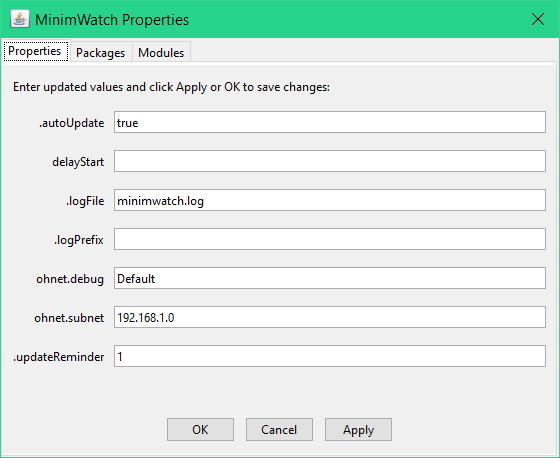 In the ohnet.subnet field enter the subnet that the minimserver is running on

Have a look at the UPnP Subnet section here https://minimserver.com/ug-other.html

That said, @Simon-in-Suffolk’s suggestion of a mesh wifi system is a good one, I recently switched the the BT Whole Home wifi and it has been great

Yes, trying to put the (Huawei) ISP router into bridge / pass through mode as my Linksys has much better wi-fi performance

I think it’s the second router you need to run in bridge mode, not the ISP supplied one, on which you should just disable the WiFi.

You need to set the ISP fibre router works as a bridge, turning off wifi does not do what you intend it to do,

Yep they cause more issues with device discovery than anything else like a lot of these mesh systems if they create a double NAT. Very poor design if you ask me but you can put them in bridge mode but for some reason Google frown on it in their docs.

If you really want to keep the Linksys for its WiFi performance and spend nothing you could try this.

The WiFi on the Linksys will naturally bridge to its own LAN side switch, this is now connected to your ISP router’s LAN side switch by a cable and so is effectively bridged to that too.

This is not really how to do things, as Simon recommends a dedicated WiFi access point is better, however this will work and is free to you.

@Pipdan, that will semi work, additionally you need to set the Linksys device with the gateway address and DNS of the main ISP router, when you set it up with an IP address and network mask, unless the device can work as a DHCP client… which would be unexpected.
Otherwise the Linksys device will be isolated from the internet and/or cause unpredictable results.

True, but the Linksys does not really need to go onto the internet at all. It wont act as a Gateway for anything other than itself. All that would be in use would be the WiFi and LAN switch, not the WAN or router function.

No, but it may be using NTP, checking for firmware updates etc, and it will need to know the gateway address or it might complain or error… as you say it is being used in a way it’s not designed or intended to be used.

You are absolutely right, but it would not be using those functions, it genuinely would not matter to it as all the Linksys would see is that its WAN port was disconnected. It would not care about nor try to access the internet. The WiFi and LAN switch would function as normal.

Fair enough, as a stop gap / kludge it should work… but I wouldn’t leave it like that as a permanent setup. Yes all the layer 2 functions should work regardless.

Totally agree, it would not be my choice either. However, its free and immediate and that can matter.

On another topic, I’d appreciate your insights on how IGMP filtering affects SQ related performance, prob swap to another post for that one.

Start a new thread and I’ll chime in… the benefits will depend on how much group data you have flowing in your home network.

Thanks to all for the handy tips.

I stand guilty as charged of overcomplicating my network & have reverted to a single router.

The second router wasn’t actually doing much other than boosting wi-fi to my TV. (The NAC 272 is wired in.) Running an ethernet cable from the switch over into the TV room wouldn’t be a massive job. (Ah, but which cable gives the most vibrant colours?)

Had to hard reset the ISP router thereby wiping all the port forwarding settings, so Bubble & Minim are still offline, but I think I’m up to the challenge…

Will report back if further assistance required