Maybe this will be the answer to all those dodgy vinyl discs.

Seems that T Bone Burnet is working on a format that combines the benefits of vinyl and CD. Ionic Original claims to offer master disc quality using an alloy based disc similar to an LP that’s spun and read with a stylus.

I’ve seen nothing so far that indicates whether existing TTs will read this format, but Bob Dylan has recorded songs on the format.

Maybe another bright idea like Betamax that will go nowhere. We shall see.

I thought April 1st had already been and gone

A new version of the acetate disk on an aluminium platter? 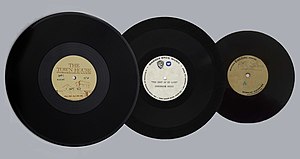 An acetate disc (also known as a lacquer, test acetate, dubplate, or transcription disc) is a type of phonograph record generally used from the 1930s to the late 1950s for recording and broadcast purposes and still in limited use today. Acetate discs are used for the production of records. Unlike ordinary vinyl records, which are quickly formed from lumps of plastic by a mass-production molding process, an acetate disc is created by using a recording lathe to cut an audio-signal-modulated groove...

Now if Phillips or Sony were behind it… There was a revival of Edison cylinders with field recordings a few years ago for folk musicians to sing or play along with. Bound to be a curiosity, nothing more.

In 1985, GZ implemented the DMM (Direct Metal Mastering) technology founded by the German company Teldec. This technology involves the production of steel plates which are coated by a layer of copper through a special galvanic process. The advantage of manufacturing our own copper plates is the possibility to control their quality and adapt the number of plates produced according to the pressing requirements. After cutting the audio grooves into the copper layer (see page Mastering) and engraving them with information necessary for identification, the plates are then immersed as a cathode in an electroforming bath. An electric current flowing throughout the bath from the nickel anode to the cathode creates a deposit of nickel atoms onto the copper layer. We then get a mirrored image (negative) of the plate after separating the accrued nickel layer, therefore yielding an unformed stamper. DMM technology allows for several sonically accurate stampers to be directly produced from 1 DMM plate.

Streaming is the present as well as the future.