Further to an earlier thread on looking at Melco in my system, I found some seemingly rare ex-dem Melco stuff in black and so went for it. So I now have an N10, S100and D100 with AQ cables. It’s set up and sounding good, (“better” than the N1 one-box I tried), but I seem to have an issue with Songkong. I installed Songkong and MinimServer as recommended in the Melco leaflet, as the Artwork was mostly wrong in the initial rips, using the pre-loaded Twonky, I guess. However, when running Fix Songs in SongKong, while the Artwork was corrected well, every track of every album lost its title and just became “Modifed or deleted item” and could not be played at all. Switching off Songkong but keeping MinimServer kept the correct Artwork and reinstated the track titles/made them playable, albeit with a few inconsistencies in listings on multi-CD special editions. This is using the Naim App as the control App for the ND555 and the Melco as a Server.

What am I not doing/doing wrongly with Songkong, and/or are there compatibility issues with the Naim App?

Grateful for any pointers (In simple terms/words of one syllable, if you wouldn’t mind)!

@Meni, @Dunc, and @Peter1480 have the N10. Should help.
I have the Melco N1z2 with Twonky, have changed or installed nothing. No problem with metadata.

Sorry cant help, as i dont use mine with naim app. I have only just got the N10 and the transfer went very smoothly, apart from it taking about 8 hours. Nothing lost or changed, or as far as i can tell tight now

I have n10 running songkong and minimserver 2. Works seamlessly. If you run songkong in preview mode, you can see the changes that it will make to any meta data before you run it for real. In songkong go to tasks, fix songs and tick preview mode box. Run it and then you can inspect the changes it would make

@NB60 Same here, N10 but I run Roon on an external NUC to contol the N10. These are my settings. I’ve never had a problem with SonKong, its great for rock and classical. 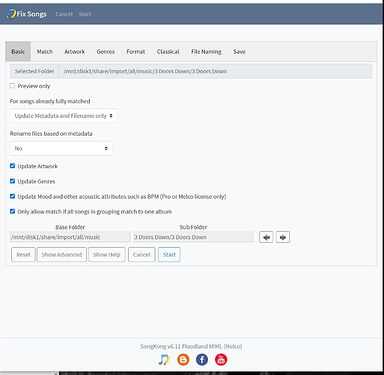 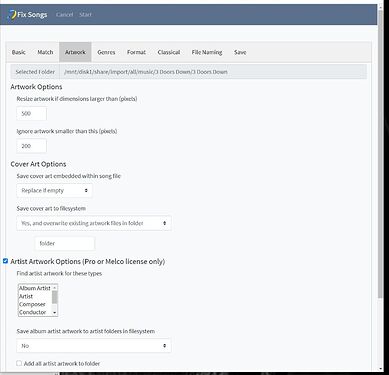 I would get on to Melco they are supposed to be pretty good on customer service…Phil Harris does pop up as (Balou) on the forum from time to time…
but best contact direct.

Phil Harris is very helpful, there is aslo the Song Kong forum that you could post you problem on.

The Melco site have also a contact possibility. You can send a message and they respond very quickly.

Yes, I tried the Songkong preview and the spreadsheet all looks good. It’s just that if I run it, all the tracks change to “deleted/modified” and are inaccessible/won’t play. Will post on the Songkong forum and contact Melco. I had hoped I was just pressing a wrong button or similar…!

For the Melco support (Phil Harris), is that through the Melco website contact form, or the UK distributor? (Audiophile Digital Music Masters).

The UK distributor will be fine, they will sort you out.

I emailed through the Melco Support page, so let’s see. I tried to join the Songkong forum but it keeps saying it’s sent a validation email, but nothing comes through (including in Spam), so can’t post anything!