Just seen that Dali has launched the IO6 headphones and since I’m in the market for a pair I wanted to check if anyone has tried them? How do they fair against the likes of Sony 1000xm3?

Any other nouse cancelling (non Bluetooth) over the ear headphones I should consider?

I plan to use them wired (Not keen on Bluetooth transmissions that near my head) so I hope the Bluetooth can be switched off? Also is there a cable available that ends in a lightning connector so that I could plug directly to iphone xr?

As I understand it they’re not put yet and don’t seem to be offering the full on noise cancelling of Bose or Sony.

You could try the Beyerdynamic Lagoon which can run with Bluetooth off. Sound good, but a bit flimsy and (I find) uncomfortable if you wear glasses. They would be better if they didn’t press the tops of your ears (they don’t quite surround my ears).
Alternatively Sennheiser’s new Momentum 3 - though the battery life is quoted as 17 hours (assumes bluetooth on) - very comfortable, or their even newer PCx550 Mk2 (the Mk1 is ok too). I think there’s some kind of limiter in the Sennheiser as they don’t seem to go very loud when connected to an iPhone - I’ve yet to try with the output from a “real” amp. I found the Momentums to sound very good too.

If they fit you then the Beyerdynamic would be the ones to beat. NOt heard the Dalis.

Bang&Olufsen has Beoplay headphones to choose from. F. Eg. H9. I have an older model H6(wired) and Sony wh-1000xm3. I prefer H6 over Sony soundwise. So I would think H9 might be worth listening to. If you travel much then Sony’s noise cancelling is priceless. During my trip I fell in love with Sony when I managed to travel by plane over 14 hours without the need to recharge headphones using noise cancelling&bluetooth. I find mute option using your hand very usable.
Some noise cancelling headphones can be used both bluetooth and wired so that offers variation depending your needs.

When I bought some noise cancelling headphones (for use on the treadmill) I listened to a few of the popular ones but ended up with Sony XM2 (XM3 were just out but I though the XM2 sounded better). Never been a fan of Bose (always found them uncomfortable) and the Sennheiser (cant remember model now) did not seem to have the range of the Sony. This was over a year ago now so not sure about the current line up.

You might also want to consider B&W PX7 in the pack.

I have to say I thought the Sennheissrs were also poor on range and it that comfy.

I wanted to buy Bose QC-35 when I went to store. Bose and my skull didn’t cope well making my head hurt behind the ears after 10min of listening. I then turned to Sony and never looked back. It was surprising to me because I don’t have good history with Sony products. But these headphones have made me smile few times now.

We have two pairs of Bose noise cancelling headphones. My wife uses QC-15, which are hard wired, whereas I use QC-35, which are Bluetooth, but can have a cable plugged in to bypass the Bluetooth. They both offer reasonable sound, but have very good noise cancelling properties - essential for frequent flyers (and anyone flying in a B777 aircraft!). Neither have a FireWire connection, but the converter is probably the cheapest item sold in the Apple shop (<£10).

Neither have a FireWire connection, but the converter is probably the cheapest item sold in the Apple shop (<£10).

If you’re referring to the Apple Lightning to 3.5mm jack adapter, yes, it’s cheap by Apple standards, and it has the worst reviews of any product that has ever had online reviews as far as I can see! I usually take such reviews with a large pinch of salt, but the universal slagging this product gets is pretty severe, so when I bought an iPhone with no headphone jack, I treated myself to an Audioquest Dragonfly instead, which has been excellent.

The latest edition of Bose has better noise cancelling than Sony but still can’t match sound quality or comfort imho.

I would dread to think of how many hours I’ve spent in aeroplanes listening to music with my Sony. When you take them off you realise how loud aeroplanes are.
You can use them wired but they are designed for wireless.
Probably one of my best ever purchases.

Wired are a completely different ball game though and imagine will be better sounding.

Highly arguable as to whether that’s true. Most reviews of the Bose say it’s barely better than the QC-35; probably just about on a par with the Sony; the build quality is worse and the price is dearer.

Thanks for the tip; we’re just about to upgrade our iPhones to models which don’t have proper headphone sockets.

Used many Bose models over the years, purely for their noise cancelling performane on flights.
Took a chane with Bang & Olufsen H9i - good sound quality, decent noise cancelling. And very well made too.

Thank you guys. It sounds like the Sony wins the battle so far for providing a good balance between comfort, NC and sound quality.

I did a search on that and it appears to be a DAC? I’m looking for a Lightning to 3.5mm jack converter.

Hi. I have personally tried the Dali iO6. I have also owned the Sony MX1000, Bose 700 and BW PX. I have also extensively tried the Sony MX1000 M3. The noise cancellation is superior on the Sony and Bose. But the Dali iO6 does not lag significantly behind. It’s better than the BW PX. Sound wise, in my opinion, the Dali’s are the best sounding of the lot. I find the mids on the Sony tend to muddy the highs. The Bose are fun but bloated. The BW are really clean but the Dali’s sound fuller without colouration. Short answer : I bought a pair of Dali’s and the BW is being sold. Hope this helps. Do go give the Dali’s a try. They are outstanding. With regards to your question about a lightning to headphone cable : I believe Belkin has one.

Yes, it’s a DAC, but so is the Apple Lightning to 3.5mm converter. It converts the digital output of the iPhone to an analogue headphone output.
You need an Apple CCK adapter to use the Dragonfly, as it has a USB input, so it’s not as neat as it could be, especially if it use it in your pocket, but it does sound good.
Another option would be the Fiio i1.

I did like the dragon fly but with adapter required to connect it to your iPhone it made the whole thing not very “mobile!”

Shame you can’t use a dac with true wireless in ears.

Yes, it’s fine if you’re going to use it with the phone sitting on a desk, but not ideal if, say, you’re on public transport. 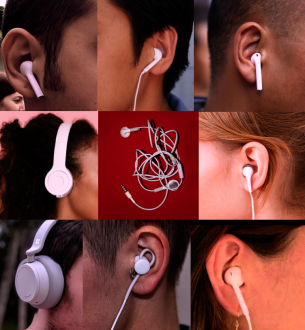 If I told you about a piece of consumer electronics technology that: A billion+ people own and use every dayHas changed those people and their world in some pretty radical and consequential waysGet…