I signed up for a Qobuz Sublime subscription this year and have been taking advantage of their high resolution promotions. I’ve been very happy so far with the quality of the downloaded files.

However, for older recordings, like many, I’m often buying albums I’ve already bought multiple times in other formats and resolutions. As such, I’m mostly interested in the latest or best quality remasters and formats.

I’d like to see if a Qobuz specific thread for notable/new purchases would be useful.

As an example, I stumbled across a Black Sabbath remaster that sounds quite good so I purchased it. I notice the same album was remastered in 2014 also and as you’d expect the 2021 file sounds better. 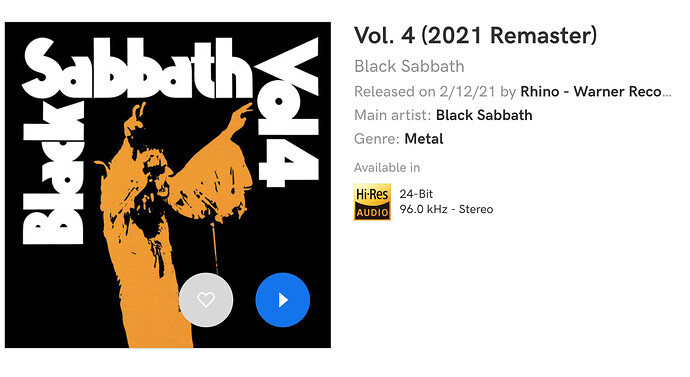 I have most of the Ozzy led Black Sabbath collection and would like to get the rest of the catalogue in high resolution but I don’t want the 2014 versions if they plan to remaster them again. So I’m holding off for now. Do the labels have a schedule they publish for upcoming remasters? That would be nice.

Anyway, is there a particular album you recently purchased from Qobuz that you can recommend? My tastes are highly varied so feel free to offer up your recommendations as perhaps others would find it useful.

The Qobuz sublime subscription is a great buy if you are purchasing Hi-Res.

The record company model is brilliant you have to buy the same album on vinyl, cassette, 8-track, CD, mini disc, Hi-Res, deluxe version, super deluxe version and then back to the vinyl version again.

Funny sometime ago there was a quirk in the pricing model and 7digital we’re doing the first 8 Black Sabbath albums in Hi-Res for an unbelievable £2.99 It was broadcast in the “Music on Special Offer” thread in the forum.

Agree it is sometimes difficult to know if the Hi-Res is going to sound better than the standard offering. On older recordings, in some cases it is a revelation on others you wonder why they bothered with the transfer.