Hello,
I am not sure whether how many of you cares but I think one of the things which could be improved is the now playing screens available on the new Uniti range. I am not really fan of the screen displaying the album cover full size after only a few secons of showing detailed view. If anything, I would personally like the screnns to be the other way round so the default is the detailed view and when the proximity sensor is trigged the view would change to full album cover. I think having detailed information as default would be much better as it would limit iteraction with phone or pad just to check what for example Radion Paradise is playing. Or even better it would be this function to be user selectable. 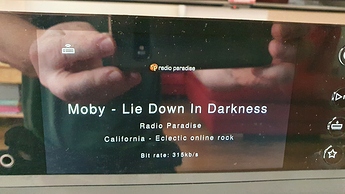 20200623_1744044032×2268 1.74 MB
I think the only way to request it is to send email to Uniti support as there is no ‘feature request’ facility here so they can know that there is a interest in such feature. I have already sent several so porbably they do not take me seriously anymore but if if more of users would send their requests…obviously if any of you thinks that this is important enough.
2 Likes
robert_h June 23, 2020, 9:34pm #2

You’ll probably find this kind of feature is already being tracked in jira.