…on all the time except for forecasted periods of lighting or out of town for business or pleasure. I like to make sure I can get home to shut the system down if bad weather moves in unexpectedly.

always turn my kit off , my gas and electric has just gone up yet again. it soon warms up and gets up to speed and the valves would be reduced in life .

with the exception of my ss pre amp which stays on

Leave it on all the time. I wholly understand the environmental concerns, but turning down the heating and changing all lights to led will more than offset the energy used in powering the stereo. You’ll always have a system working at its best and if you are chilly just get a blanket out. If you get your energy from a renewable supplier such as Bulb any concerns should be assuaged.

I was told that capacitors dry out with age, not use. Leave it on 24/7. Lightning storms is your call. Some turn off, others don’t.

Not what I was told by the manufacturer of my amplifiers.

I was told by them that leaving my amps switched on 24/7 would significantly shorten the lifetime of the capacitors, and that best practice was to switch on the amps approximately 30 minutes before use.

There may well be other reasons for Naim recommending that you leave their amps switched on 24/7, but capacitors are capacitors (or are they?), and there is no doubt in my mind that having them permanently switched on will reduce their optimal lifetime.

@Hmack, let me refer you to this thread in which several of us refer to capacitors drying over time whether in use or not.

Time to service, how to know? Hi-Fi Corner

i wonder how we can know for sure that it’s time for service. A lot of members are saying about 10 years for naim components. But it must differ if someone is listening 1 or 2 hours a day or several hours. Personally i have a tube ear yoshino preamp, ear 912. I changed my tubes recently. The preamp has about 10 years, around 4000 or 5000 hours running. I don’t feel any problem. Can i wait some years more? wait that the sound becomes less dynamic or harsch…?

Happy for it to be proved otherwise, I’m continually learning.

Naim’s recommendation is to leave on for the best SQ.

I am certainly not qualified to personally argue definitively one way or the other, but my advice came directly from Lindemann - the manufacturer of my amplifiers (Lindemann 830s/858).

As Guinnless points out, Naim’s recommendation appears to be related more to sound quality than to longevity. Perhaps Naim amplifiers simply take longer to reach their optimal operating state than those from Lindemman - hence the recommendation.

Likewise, I’m no expert having spent the majority of my working life in mental health care. When I first bought Naim in 1997, I had a discussion about care of the system and servicing. Advice (pertinent to this discussion) from two dealers was, leave it on all the time for best sound quality, and switching it off will not extend time to servicing as the capacitors will dry out regardless. This was also the wisdom expounded by many other Naim owners of the period. No one who works for or with Naim has ever contradicted this wisdom.

I was told the same thing so often by people who should know, that I believe it. Now if new (to me) knowledge comes along to debunk it, or I am told I was hoodwinked into believing poor information then I am OK with changing my belief.

Chemical reactions all speed up with temperature so I’d assume capacitors degrade quicker with temperature. I’m sure that it’s not in Naim’s interest to preserve the component life of their boxes. Servicing is a lucrative revenue stream for them. Capacitors are cheap and servicing isn’t. I doubt it t akes long to get an amp up to optimum operating temperature. No reason why Naim should be any different from anybody else. Ultimately, I suppose if you can tell the difference in SQ from your amp left on 24/7 or from being warmed up for half an hour then you have your answer. Not sure I can. Therefore, I’ve decided to power down if I know I won’t be listening to it for a day or so.

Trying to find the best way to avoid envirinmental impact is good. But it’s complex. HH has hit the nail on the head. Effectively if you just do what you reasonably can in the house, the energy savings will add up. What each household can do will of course vary depending on how much is currently wasted. Maybe it just 5% for one home and 30% for another and that’s fine. Currently though, most don’t even do what they easily can.

The next bit is much harder to quantify. When things die, they are more likely to die on power on. So if you have a rack of 6 boxes and turn it off each night you might figure you save a lot in energy over 10 years. But it only takes one box to fault and not only will the cost of repair likely exceed a decade’s worth of energy costs for the system, but the carbon footprint of shipping it to and from the manufacturer (6000 miles in my case) or the manufacture of whatver you replace it with is likely also larger than the envirinmental impact of idle power during all that time.

Every action taken has an envirinmental cost. Power off when not in use or LED bulbs are easy point in time cost savers but figuring the real long term impact of each decision is a nightmare. I believe that power on 24/7 is both better for the system and environment long term. But it is impossible to know for sure.

Speaking for my fully serviced 52/135 olive kit. I never turn it off unless I’m on a holiday. Takes a good 10 days to come back on song once cooled down or even off for more than a dozen minutes. Bottom end and sound stage diminish no longer inside the note you could say. I guess the newer gear is more tolerant.

A revealing system will let you know easily what the difference is.
Class A amps should be turned off when not in use as the power bill goes up and caps die fast. In saying that they can sound very very good.

I’m sure that it’s not in Naim’s interest to preserve the component life of their boxes.

It is absolutely in Naim’s interest to preserve the lifespan of components in their boxes. However, while many components will go on working OK for many years, performance of certain components tends to fall off after a certain time. Naim’s No.1 interest is performance, and maintaining that performance for as long as possible; hence the provision to service Naim kit long after it was first made - including amps made over 40 years ago.

Servicing is a lucrative revenue stream for them.

When I was at Naim, the service department was not viewed as a big profit generator, but just to hopefully wipe its own face. AFAIK that’s still very much the case. However, as a benefit both to the company and its customers, its value is extremely high. Naim always try hard to maintain serviceability for products long out of production and where possible they make large end of life buys for certain parts to support that aim.

I was told (not by Naim) that the power surge on switch on has an effect of shorting the life time fo the various components on electronic equipment.

This is true of anything to some degree. Statistically things are far more likely to die on power on than any other event.

There are exceptions and of course there are going to be Naim users who can claim to have turned it all on and off for 20 years without a problem. But they would be statistical outliers.

And that trend goes up even further if the device has moving parts. Motors like to stay in motion and be kept warm so that if they do stop periodically (like the compressor in your fridge), they are not starting from cold.

hence the provision to service Naim kit long after it was first made - including amps made over 40 years ago.

This we should be incredibly grateful for.

Naim’s competitor Linn,.does not offer this recapp-service.
If an older Linn-product “breaks down”,.well then you just have to “throw it away”.
Or let some “ordinary” repairman repair it.

We have such a turn,.that we have a guy who has the skills to do recapp’s according to Linn-specs.
He has become known all over Scandinavia for this.

He’s incredibly good,.and he’s a real Linn-fanatic.
But he has a normal job,.so he only does this when he has time.
He has a very long waiting list.

But it’s sad that Linn doesn’t have the same idea as Naim,.regarding this customer-service against its older products.

• Below an example of my friend’s recapp-work,.on Linn Active-cards for the speakers Ninka and Keilidh. 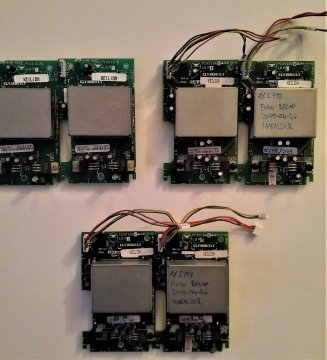 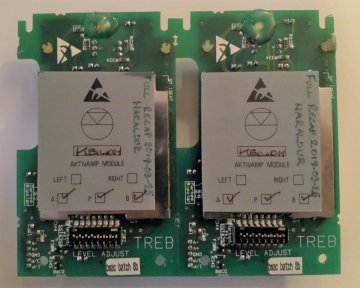 •He calls himself Haraldur at the Swedish Forum.

I think Naim have more competitors than Linn

As for recapping at the mothership, this is a lot more common with non British brands. Most Japanese brands will do this for very old gear. Denon even have a standard recapping charge for their amps large and small, new and ancient.

On 24x7 for me as I hear my system warm-up to good effect over days - I turn-off for thunderstorms or if away for more than a day.

Electrolytic capacitors age with time and stress; the stress can be temperature and large surge-current from switch-on charging. Since all my caps are in separate PS boxes from the items that can get hot it is less of a problem - especially in UK as it does not get that hot here.