Now that my main system is back up and running following a long, drawn-out relocation, my mind is turning to assembling some of the random equipment I’ve collected over the years into a second office system. I have a Nakamichi ZX-9 that needs a service, but I’m thinking of maybe hooking that up to my CB Nait 2 and Linn Kans (the 2s, not the original unfortunately) and then going on a world search of some pre-recorded tapes to add to the ones I already have. Could be fun. Do any of you guys still use a cassette player as a part of your system? Any thoughts or experience of how it might sound? Thanks!

If you do a search using Nakamichi ZX-9 you will find 10 threads including your own. There are members who still use tape decks and tape cassette players.

Thanks - nothing worse than a lazy poster. Apologies.

No worries, I have found a wealth of information by using the search function. You can also ID members and mention them by using @Gothamist (fill in their username after the @ sign) for example to ask questions of fellow tape enthusiasts. Just a heads up…

Just a heads up…

My Nak DR1 sounds wonderful in an active Naim system. Not to CDS3/555 PS level but close to Rega P25/Hana/Cyrus. I have over 900 homemade cassettes that are enjoyed regularly. The higher end Naks hold their own even today with well recorded tapes.

Members here may well recall my own Nak ZX-9. Eventually it needed a service and I had it re-capped as well by Paul Wilkins at Bowers & Wilkins. It came back performing wonderfully. However, I wasn’t using it so much, and when someone made me a very generous offer indeed, I couldn’t resist so let it go. The day they came round to collect it, we recorded a few tracks off LP and while doing so we switched between the source and the signal coming directly off the tape. The two were astonishingly close. The cassette deck even managed to replicate a lot of the spatial clues, which so often are lost or subtly shifted with even the finest decks and recordings. The only obvious clue that we were listening to the cassette was the background hiss (no dolby being used) but even that seemed separated from the signal in such a way as to not really be a bother. An incredible machine. 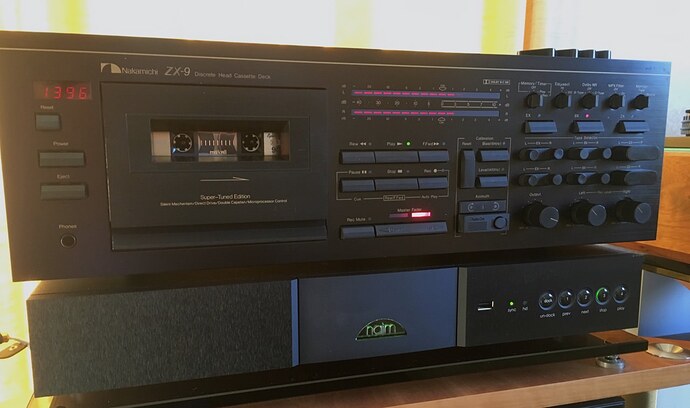 1280×757 119 KB
More recently, missing my ZX-9, I bought its predecessor, an old 582 and had it completely restored (serviced, re-capped, upgraded op-amps etc…) and this is also an incredible machine, more than up to living in the big system, let alone partnered to a CB2 and Kans. 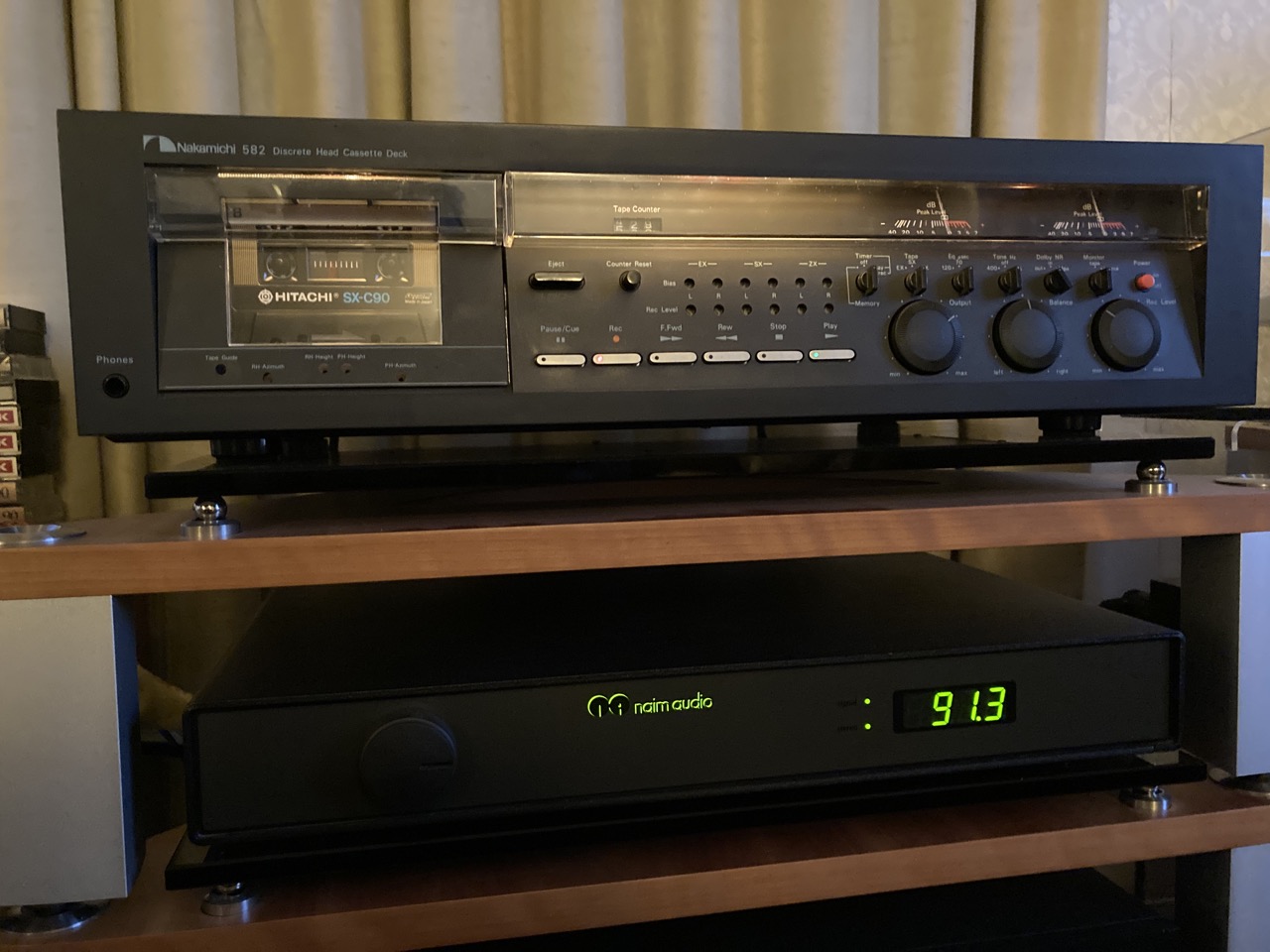 The only issue with these two decks is with pre-recorded tapes. These were never much cop to begin with (high speed dubs, poor azimuth, dolby tracking issues, awful shells etc…) but really to get the best from these you need easily adjusted playback azimuth and maybe some sort of trim facility as was one offered by NAD and Yamaha to better aid dolby tracking. The 582 can be manually adjusted fairly easily but you need to then get your Nakamichi alignment tapes out to adjust back again. There are some pre-recorded cassettes that can be good though - Nakamichi’s own, all made on their own ZX-9s…

p.s. ES Labs seem to have a great rep for service in the US - I assume you are there by your username?

Yep, they’re very close, Richard - I’m a NYC post covid exile now living in Rhode Island, so ES Labs are in my back yard.
It must have been hard for you to give up the ZX-9, it’s truly an amazing deck. Here’s mine with one of its brothers. Not the best pics I’m afraid. 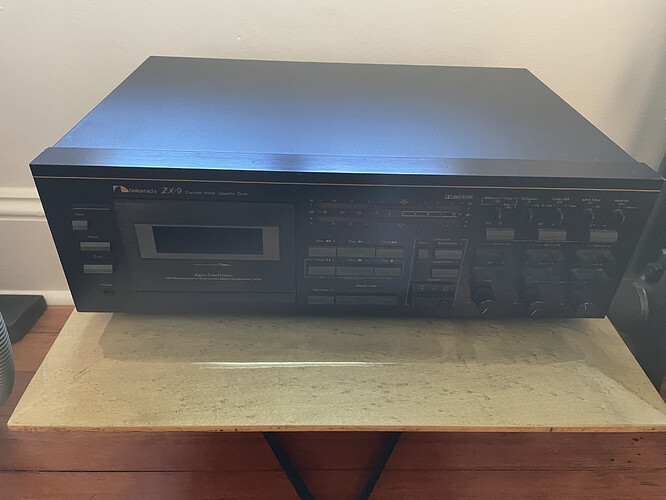 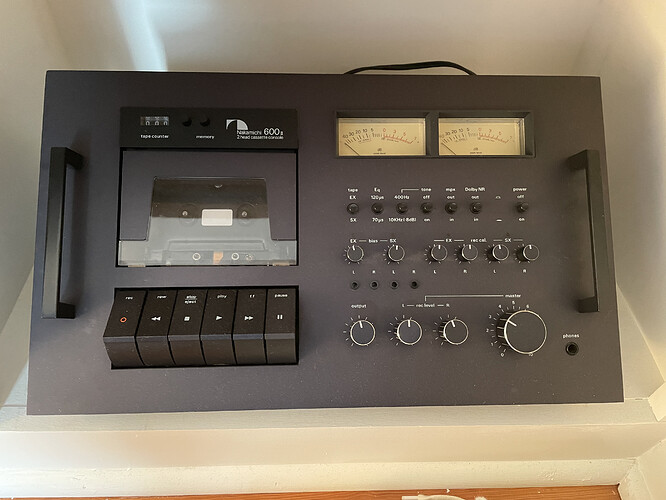 Got to love the 600 Mk.II. So much easier with the proper knobs for tape alignment. Just a shame you didn’t get a third head for monitoring. I wish Nakamichi had done the same little knobs for the 582 as it’s always a bit fiddly with the little grey screwdriver, especially doing the record head azimuth alignment for each tape before recording. Alignment with the ZX-9 was a breeze by comparison!

Yes, I had a few moments where I did wonder whether I had done the right thing. However, the 582 has filled the void nicely, and if there’s any space left for regret then I also have a number of other nice Naks, including a very nice BX-300E, an LX-3 and a 700.

Was there once a prototype Naim cassette deck using a Nakamichi mechanism. or was it maybe based on the NEAL mechanism, which is or was used to record Police interviews seen on our favourite (UK-based) police procedural TV programmes?

I have a vague memory of reading that Naim were doing some R&D work on a cassette deck, but that limited resources (or some other factor intervened) when Naim started development work on CD players. If it was an either/or choice, then Naim surely picked the right option with CD players.

No Naks for me but my main system currently have 2 Sony tape decks as the only sources….just purchased 22 Prince cassettes so I’m sorted for a listening for a while!

Yes, Naim worked on a prototype cassette deck. @Pauls gave some details on here a little while back.

Hi The Naim cassette unit used a German Papst transport and was sounding pretty good, It didn’t go fwd as the costings just did not add up- I might have a photo somewhere will check!

I suffer from an addiction to collecting old Hi-Fi! I have several Naks: a 582 (my most recent acquisition), a 680 two-speed, a CR4 (which has recording issues, but I knew this when I got it, so it was bought for a far from shabby price), a Cassette Deck One and last, but not least a Dragon.

Both the Cassette Deck One and the Dragon are great for playing back pre-recorded tapes because of the ability to easily adjust the azimuth (automatically on the Dragon of course), but they don’t sound too bad on the other decks. 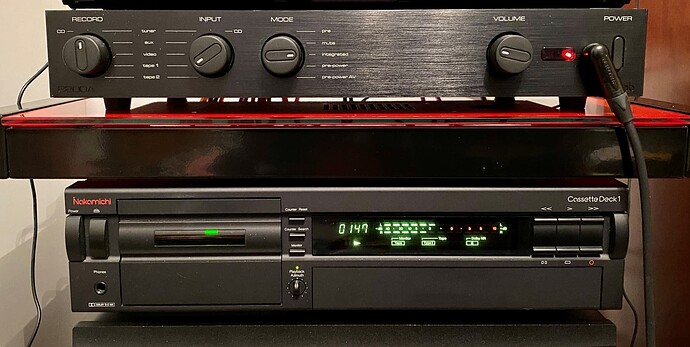 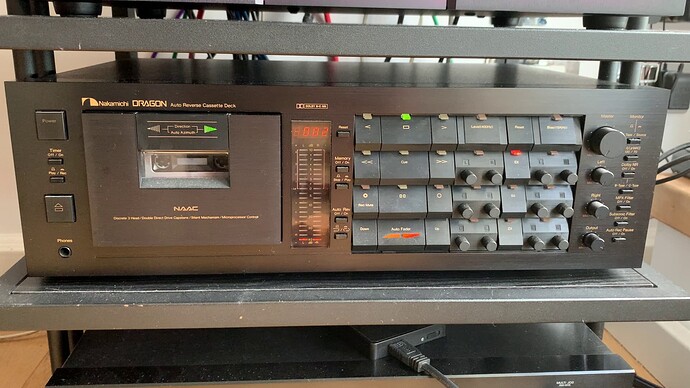 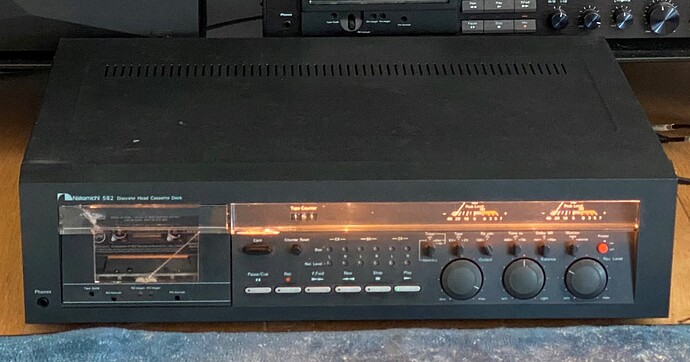 The 582 has damage to the cassette cover (so I got it at a decent price), but works flawlessly.

I need to use them all more!

I also had a ReVox B215 for a while, but it turned out to have some serious and expensive to fix issues, so was disposed off. I don’t, however, rule out getting another one, because the build quality is superb, but they tend to be pricey if in good nick.

Did any hi-fi component ever look cooler than a Nakamichi Dragon? I used to lust after one in the early 80s

I certainly can’t think of a cassette deck that did!

I have a Dragon, which I use regularly (most recently, earlier today) and I absolutely love it. I chose it over the Nak ZX9 and CR7 and the ReVox B710 Mk II because I thought it was best with pre-recorded cassettes as well as tapes recorded on a wide variety of other decks (I have about 1,000 cassettes) – I use it less often for recording my own cassettes, but when I do, I’m always shocked at just how good cassette recordings can be. 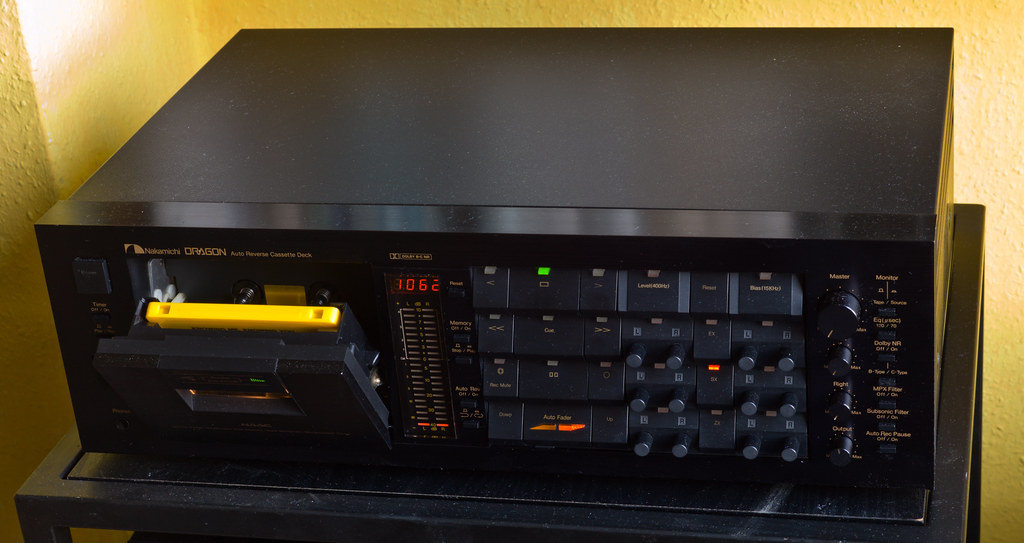 we recorded a few tracks off LP and while doing so we switched between the source and the signal coming directly off the tape. The two were astonishingly close. The cassette deck even managed to replicate a lot of the spatial clues, which so often are lost or subtly shifted with even the finest decks and recordings.

Although my AD-F660 was more modest than your Naks I felt the same way about recordings made from my LP12. With a decent chrome cassette, If it wasn’t for the hiss you’d not notice unless really listening. Never used NR just set the bias and it was great. We often forget how good equipment used to be and how far they pushed the tech back I the day.

The AD-F660 was an excellent deck and had a nice sounding audio stage (much nicer than later Aiwas). I’ve had a couple - their main weakness was the belts which turned to a horrible sticky black mess after a few decades, and with a very crammed interior and tight fitting transport, re-belting one could pose some challenges for the unprepared. Little to choose sound-wise between a good AD-F660 and its senior brother the AD-F770. I’ve been slimming things down a bit in recent years and last year let my 660 go, but I still keep an example of the 770 in my collection. It’s a really good deck. 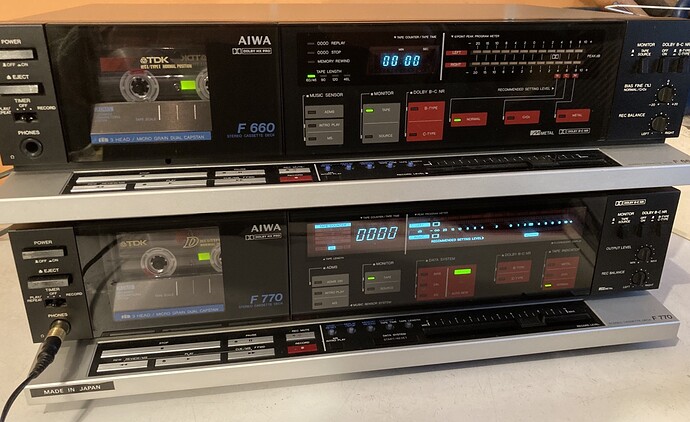 I’ve just let my 660 go for what I paid for it 2 years ago. I had great fun with it and it took me back to my youth but the worry about the fragility of 25yr old mechanicals wouldn’t go away. The guy who bought it even took the trouble to message me about how great it was sounding in his system. I would recommend a good quality tape deck to anyone who likes getting hands on with their system just to play with for a bit. The pleasure of making your own compilation tape has never been experienced by some.