Something that has bugged me for a while is the inconsistency of percussion on some tracks/albums. I suspect it is down to the recording/sound engineer. Some passages of music seem to allow the drums to completely fade into the background whilst the emphasis is placed on other instruments or vocals. Obviously music has changes of dynamics etc etc but having played in bands for many years the drums in reality don’t fade this much. Well recorded albums suffer much less with this trait. My question I guess is to those with higher end systems than mine. Do you find that your system is able to dig out percussion more effectively on such recordings and which component (speakers or electronics) made the biggest difference or is it the sum of the parts?

I, too, am surprised at the degree by which recordings vary in their balances between various contributions to the musical landscape. At the same time, I have been to live music and been surprised in the same way, in particular by sometimes overwhelming bass which obscures everything else.

Going back in time, in very small venues - e.g. pubs - I always felt that the drums overwhelmed everything else. In slighly larger venues other instruments turned up the amplification, and balance ensued. And in larger still the drums were also miked up, and it varied according to the sound engineer (the band, of course, couldn’t really tell what balance the audience could hear).

And with non-live performances, especially recordings mixed from separately recorded instruments as I became commonplace from the late 60s onwards, the balance was/is presumably set by whatever artist(s) agree the final mix - which I assume is usually the band in conjunction with the sound engineer, but presumably can vary. So if the mix seems wrong, is it perhaps not just that that is how the band wants ir? Unless of course the sound is being manipulated to fit something the record company prefers - in which case If the band is not satisfied they need to move.

I’ve a lesser system than yours but one of the joys with my speakers is that they do percussion wonderfully well.

You are not wrong there. A Marcus Miller gig a long time ago was ruined by the drumming : either the mixing was wrong or the drummer was totally unsympathetic. I said to my friend that it sounded like he was playing with the sticks the wrong way round.
B52s in 2008 drumming far too heavy. For me the B52s should be guitar led with the drumming providing a complementary backbeat. Having said that, Ricky Wilson was a unique talent and provided much of the B52s early sound.

Both sadly departed but Ginger Baker and Jack Bruce used to regularly fall out over too loud bass or too loud drums.

…were they competing with an over inflated bass guitar…get this wrong and the sound all seems to disappear.

…to be replaced by a wall of bass, that is.

I’ve never yet been to a gig where I felt the bass was too much, though I have felt the drums were too loud, or other instruments such as the flute (Focus!). Conversely I have heard lots of hifi systems where the bass has been too diminished, failing to gave the energy and depth of good live performances. (And of course I’ve heard others where the bass has wallowed or been boomy and so not good.) Clearly different people have different appreciation or enjoyment from bass compared to others. And presumably the same is true of percussion.

Getting this balance right in a live situation is certainly difficult especially in a small pub venue. Our drummer is pretty uncompromising but extremely good never the less. It does force us to turn up usually too loud but our audience doesn’t seem to mind.
Had a good listen through a mix of albums yesterday and the drums are so variable in terms of balance in the mix. In the process of demoing new speakers so it will be interesting to see if these have any influence on pulling percussion out of the mix more effectively.
First up are Neat Ministras, they sound superb in general and incredible bass for a standmout. Managed to persuade the better half to change the room layout which has also improved things quite significantly. 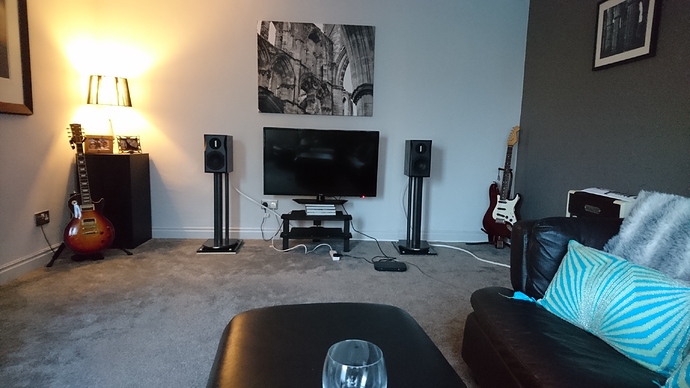 I can’t see any percussion in that picture, Stu!

Can you suggest some albums where you’ve particularly noticed this problem? I must admit it’s not something that’s bugged me particularly but maybe it’s only bad on some albums/artists/music styles.

Drum kits are notoriously difficult for hifi.
Experienced live in close proximity the sounds would be almost impossible to authentically replicate imho.
All to often the hifi imagining and energy seem separate and at odds with each other, either the image with a sense of energy surrounding or the image with energy coming from within - but live the energy comes from within and around the “image” or point source of noise.
For this I would imagine only large full bandwidth speakers with top notch ancillaries could attempt justice.

The best compliment I ever had when I ran a rock disco a few decades ago was someone telling me that from outside the pub they thought it was a live band playing. I put that down to the sound quality / type of speakers I was using, which when wound up did make the percussion sound rather similar to miked up percussion. But at domestic levels, even loud domestic levels, it wasn’t hifi - however at home I certainly wouldn’t play at anywhere near the levels of a gig, where the sound level of peaks would have been a calculated 125 dB a metre in front of a speaker.

This is an area where in my mind hifi has a major advantage over live music actually.

Yes it does sound different at home and nothing like live music when it comes to percussion. And this, to me, is a good thing. Out of all the hundreds of live blue, jazz, and rock gigs I’ve been to, percussions drowns out everything else. Events that are amped have a bit more control but the drums are still on the hot side. Pretty common to see one performer with a flute or bass guitar or something and see them play but not hear it over the drums. And for unplugged jazz in a bar… oh totally forget it. It’s all crash, bang, wallop and a struggle to be heard for the other performers. No balance there at all. Of course live music generally wins because 90% of the reason you go is the atmosphere.

Orchestral music is about the only one that sounds consistently superior live to my ears. Everything else sounds miles better at home.

My question I guess is to those with higher end systems than mine. Do you find that your system is able to dig out percussion more effectively on such recordings and which component (speakers or electronics) made the biggest difference or is it the sum of the parts?

My experience moving to a preloved serviced unDRed 552/500 of approximately 2000 vintage is that it reproduces music in general close to what is intended. I have experienced what you describe. It is not entirely the boxes but getting the whole setup right.

I have found my Sopra 2s the least in need of tweaking - every change elsewhere was easy to hear. I have a largish lounge and they just have go where they are now. We are not prepared to do room treatment either. Right now it works and there won’t be Fraim or mains changes. The MusicWorks G3 with sparkly bottom and Powerlines everywhere pulled everything together.

Even though I had 282/SuperCapDR/250DR then 300DR then 252 before I never quite got all the music right. Maybe the mains, glass shelves like Fraim and shelve spacing etc sooner. Maybe too much crud on the incoming mains. Who knows.

Thanks for the replies, been a bit busy and neglected this thread for a day or two. However been doing some critical listening when I can. I think it is so variable from one recording to the next. I have also noticed percussion does seem to fade slightly during guitar parts and is emphasised in other passages eg changes from verse to chorus. Hifi can’t seem. To quite capture the dynamics of live drums but I agree the better the system and recording the closer it maybe gets.