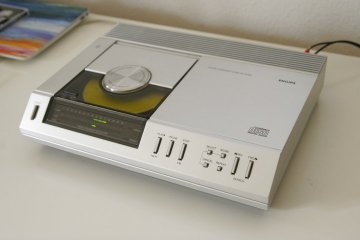 Philips CD-100,…Do you remember this CD-player in the picture above.
It was with this device that the CD-sound started.

It was the first to be released in Sweden,…and was launched as “The Perfect Sound” in the advertising

Found this picture above on a Swedish sales-site just now,…it’s for sale and works apparently. Had been fun to buy it,…to hear how a CD-player sounded 1982.

Is there anyone here who had such a Philips CD-100…?

I remember listening to an early CD player, I have a suspicion that it may have been that one, which was the cause of me sticking with vinyl until streaming audio came along!

I bought the cd101…alas like many Phillips products they have never been reliable. After several products, tv, hdd and the cd101 i will never buy from them again, poor quality and customer service…shame?

which was the cause of me sticking with vinyl until streaming audio came along!

But I was a little earlier.
All new music came almost only on CD,so 1994 I bought a Linn Karik CD and Linn Numerik Dac. But it was my LP12 that spinn most of the time.

This combination,…with the Purist Audio Design Collossus Digital-Cable actually played incredibly well.
It could be listened to,…not just use for background listening.
But it was still Vinyl that applied most of the time. 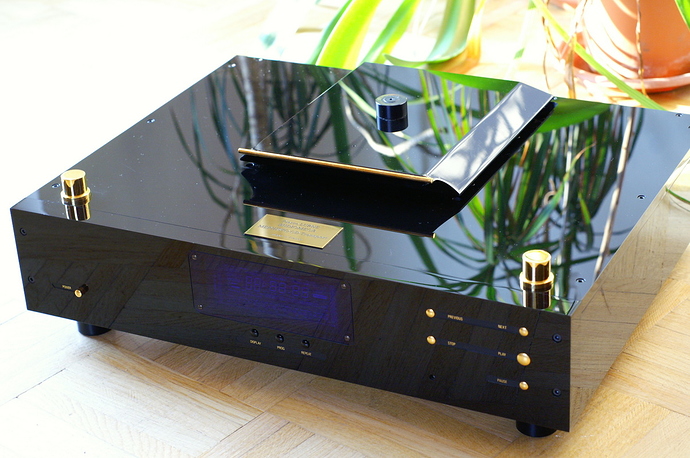 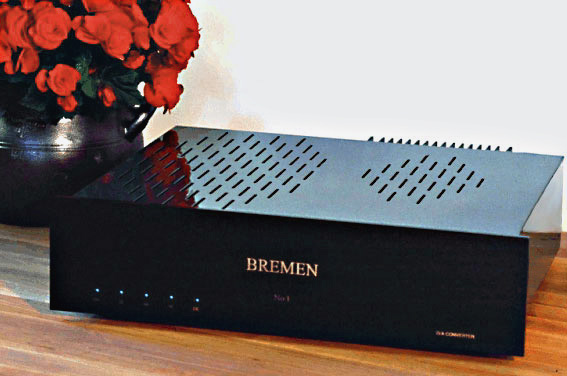 Not sure but i was hooked with cd. I then bought an Arcam transport and Deltec PDM1 dac , followed by the classic Naim CDS.

i had one, also the phillips CD104
how tech has moved on…

I still have a Japan built Marantz CD74. A real heavyweight machine and it still works faultlessly and actually sounds pretty good.

I also have the machine that I think pipped both Sony and Philips to the sales post in the UK, the Hitachi DA-1000, still boxed and mint. I loved the vertical loading door and it all still works perfectly (I hope - I haven’t tried it in a few years). Sound is fine in isolation but pretty typical of early CD.

alas like many Phillips products they have never been reliable.

Naim had the Philips CDM 9PRO in some of its CD players.
In my Audiomeca Mephisto CD-drive there was also a Philips CDM 9PRO.
I have for me that they were counted as the best on the market.

Maybe Richard can confirm and maybe develop more about. 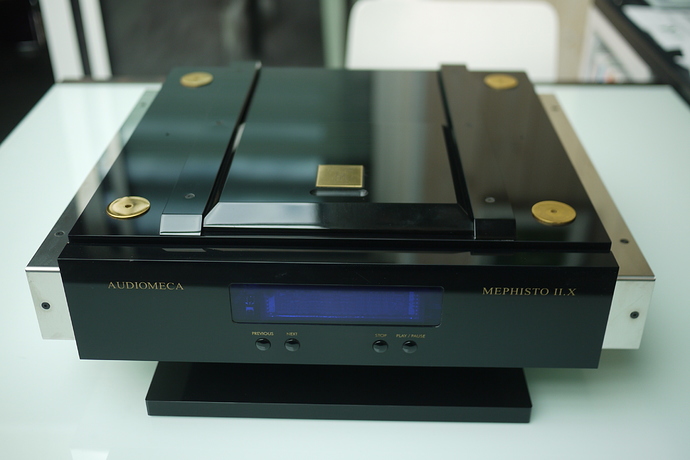 The only unreliable Philips/Marantz Europe machine I experienced was the CD104, although strangely my Mission 7000R (best sounding of the early gen. players IMHO), which is based on a 104 has been very reliable. Otherwise, all the old early generation Marantz and Philips players I have are all still working perfectly.

Naim used the CDM4/25 and also the CDM9/44 and CDM9 Pro mechanisms in the early Philips 16 bit chipset players. The CDM9 was an excellent and reliable mech so long as the platter doesn’t drop (a fairly easy fix).

FWIW, my CD74 uses a Japanese made CDM1 mechanism, generally thought of as totally bullet proof, if a bit slooooow to find tracks compared to modern mechs.

Here’s a picture of the early Philips CDM mechs, courtesy of Dutchaudioclassics;

I guess what i was getting at Phillip are/were great inventers, but they were not reliable, and imo poor customer service. If it had all come together, they were ahead of the game.

I get some nostalgic feelings when we talk about CDM9 PRO,…I loved that mechanic.
I still have my Audiomeca Mephisto,…but I haven’t used it since 2004.

Philips ended up producing CDM9 PRO,…it was because of that Naim had to stop manufacturing some models.
Am I right about it Richard.?

I know I tried to buy a CDM9 PRO from Naim,to have in reserve…
But it went less well

,they must have spare parts for their own players.

OK, so I admit that CD playback did improve! Still, I like to keep things simple, and I was happy to be that weird guy who still has a turntable when everybody else had moved to CD. I continued to run an LP12 until a couple of years ago, when it had to go, to make room for my NDX.

Here in sunny Perth the first CD player we got to sell was the Sony CDP 101. The Phillips hit our shop very shortly after.
The release of the Sony was the one and only time I have ever had clients queuing for a piece of equipment. We simply couldn’t get enough in the early weeks post launch. And honestly as pretty die hard Flat Eathers we sold out despite not enjoying the sound.
We didn’t stock Philips, but as we stocked Marantz, and as here in Perth the wholesaler was affiliated with Philips they offered us 100 Philips CD100s.
They sold like hot cakes. Whilst still not my cup of tea, the sound was better than the Sony unit. But the failure rate was unbelievable. So within a few weeks we had almost half of our stock returned by clients as DOA, (dead on arrival), as our policy was to simply swap faulty newly sold items.
As a retailer it hurt. More so because Philips were not at all responsive to our dissatisfaction with the service back-up, (almost none was provided).
Sadly over the years that followed the reliability of Marantz also fell as the Philips/Marantz almagamation became more entrenched.
My first CD player was the Meridian, which was a tricked up Philips. Even that failed…

Ahh… interesting player… my first player was a Marantz CD45 around 1987 and was based on the Phillips CD 150 which had internal similarities to the CD100.
What is interesting all these players used 14 bit DAC, because at the time 16 bit DACs were very expensive and not so plentiful.
The other possibly more interesting thing is that these players first adopted what Naim still do to this day 30 plus years later (albeit Naim use an AD SHARC processor for the task now). Philips developed with the TDA1540 the digital pre DAC 4x oversampler and low pass filter (what we now generically refer to as ‘DSP’)… which allowed a more natural sound by noise shaping many of the reconstruction artefacts out of the audioband whilst being able to use less resonant analogue low pass filters.These players sounded smoother and more natural than some other players at the time… despite being only 14 bit.

The next gen DAC, the TDA1541 was 16 bit 4x oversampler DAC, and some claim it is one of the most musical DACs ever made… but Philips and Marantz has to deploy some clever product marketing techniques to shift the 1540 based players first… in consumer land bigger numbers means ‘obviously’ better… so 16 bit was always going to be better than 14 bit irrespective of the sound… one reason why in the specification blurb of these early players you will be hard pushed to see that they are 14 bits.

Peder, whenever there was a hint that Philips was going to end production of a particular mech then Naim would make a “lifetime buy” in the hope that as many as possible would be fulfilled. It didn’t always happen that way though. Of course Naim would then also have to rush back to the drawing board and redesign their players. It did though provide an opportunity to make improvements along the way, but arguably the move from the CDM9/CDM9Pro was a backward step, and many will recall some of the issues Philips had with their first VAM12xx linear tracking mechs, luckily fixed by the time Naim adopted the VAM1205.

Thanks to the policy of a lifetime buy, Naim famously held good stocks of replacement mechs, particularly of CDM4 and CDM9 mechs, whereas many brands were caught short. When I began as Naim’s customer service manager I regularly received requests from high end CD player owners desperate to locate a replacement mech for their expensive machine. I had to tell them that any spare mechs held by Naim were reserved for Naim owners. It was a bitter pill to swallow, I could understand, but I also know that it persuaded some of those owners to switch to Naim CD players, all thanks to Naim’s support policy.

Interesting how times have changed

I have a Philips 150 CD player, it has a very similar technical spec to the 100 including the dual mono DAC chips, but as it was designed as a budget machine it uses the plastic CDM1 galvonometer drive.

I recapped mine then set about modifying it so that now it operates as Philips first intended in proper 14 bit mode and no oversampling. I was spurred on by Peter Qvortrup of Audio Note who mentioned that he was testing a 12 Bit converter which he rather liked. Mine sounds surprisingly good complete with its up dated valve analogue output stage.

Interesting Richard , I had a CD104 from 1985 I think, I used it for about 10 years and it was the drawer that failed in the end . I loved that CD player and I just wish I could keep a source component for 10 years these days …

It’s nice to see these old pics , I wonder how they’d sound through our current systems ?