I have recently added an analogue source to my system, having toyed with the idea for a long time.

I don’t have lots of vinyl, but with the amount of new releases and availability of second hand albums, I decided it was a good time to try!

I tried some options with my dealer and was lucky enough to secure a very lightly used Rega RP6 fitted with the Aria MC cartridge. He suggested a new Rega FONO MC as a cost effective phono amp and voila!

Considering my digital front end is an NDS/555ps, I am very happy with the performance this little setup manages to turn out, but I have noticed one thing which I think may not be allowing the combination to perform optimally; that is that there is a reasonable amount of audible hum/buzz coming from the speakers when nothing is playing (but the phono amp is on) and the volume is at a moderate level (9am on a 282). Clearly this could affect the blackness behind the music and could be damaging the audio signal. It’s not bad, but I wondered if it could be reduced/limited somewhat?

For info, the RP6 sits on top of my Fraim brain stack, the phono amp is on the bottom shelf of the same stack, with the turntable power/speed controller. Position wise, I think they are ok and unaffected by other boxes, I’m just wondering if perhaps I somehow need to consider use of the earthing point on the rear of the phono amp? Only issue is there’s no earthing line on the tonearm.

A certain amount of hum or buzz may be totally normal of course, but I am new to this and thought I’d pool into the extensive knowledge available on this great forum. Any observations/suggestions appreciated.

Try moving the Fono around. You shouldn’t get any hum or buzz whatsoever. I use an even more modest Planar 1 plus, with its built in phono stage and it’s totally silent.

As HH advises, it’s worth moving it around to find where any buzzing is least intrusive.

I haven’t used the Fono MC, but my own Superline is very sensitive to any transformers nearby. However, when positioned optimally I can get to the point where there’s no hum at all and even the hiss is impressively subdued right up to very high volume levels indeed.

Yes as HH and Richard says move both boxes around. There is a reason they are supplied with long leads and in the manual it explains to keep the phono and power supply as far away from each other and both as far away as poss from the turntable. Ideally to the left of the turntable.
I found that even moving the phono around on the same shelf effects the hum/buzz.
My Aria phono hated being anywhere near my XPS power supply or 250 amp.
Just turn the volume up and experiment. I did this and it cost me another Fraim shelf.

Ok, thanks for your suggestions. I’ll try and move the phono amp and control box around to see if that resolves it.

This is how I found my phono worked best before I changed the layout and now semi reluctantly have two stacks of Fraim. The power supply was off to the right sitting on a timber cd rack. 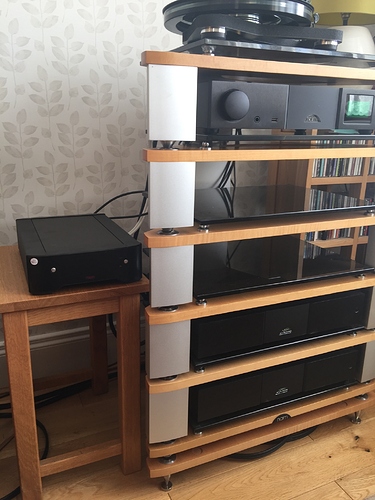 Up to now this is how it sounds best. Apologies for the bad lighting and iPhone photo. 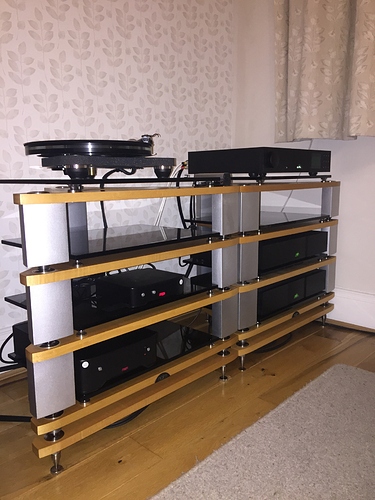 Thank you all so much. By moving the boxes around I found the culprit… it was noise from the speed/power controller’s transformer. It was plugged into a power bar on a separate circuit from the rest of the audio equipment, but I had placed the power bar between the two stacks of Fraim. The transformer was quite close to the phono amp and so when I moved the amp further away, it reduced the noise dramatically. I think the transformer may actually be faulty; it gets very hot if left plugged in for over a few hours and starts to audibly hum too. I only have it plugged in while using the turntable because of this, but I guess I should get it replaced. The other, identical transformer that powers the FONO MC doesn’t get hot or hum at all, so something seems wrong with it.

Thanks again; the noise floor has dropped dramatically and I’ll get on to my dealer when he reopens to sort a new transformer too!